A range of techniques for attaining improved separation between bass guitar and kick drum...

Kick drum and bass guitar are infamous for competing for the same audible space in a mix, yet it’s usually desireable for there to be separation between the two.

Here are several techniques to get you headed in the right direction.

1. Change the position of the microphone on the kick drum. Often the bass guitar is more boomy, so push the kick mic deeper into the drum, nearer to the beater head. This will give it more “click,” thus providing more separation between the two.

I put this technique in the number 1 slot because it’s usually the first thing you should do—don’t be too lazy to actually leave the mix position to do it rather than instinctively reaching for the EQ first.

3. Sometimes a little boost in the 100 Hz range on a bass guitar can really help, giving it more of a “hard” sound that a kick drum has a tougher time reproducing (depending on the drum). Note that this is not a rule, only something to try—it can help or make things worse depending on the instruments. Also consider boosting the 50 Hz to 80 Hz range on the kick so that it “booms” while the bass “thuds.”

4. Reverse the polarity of either the kick or bass mic (whichever sounds better). Meaning that the kick should be one polarity, and the bass should be the other. Sometimes this solves the problem without doing anything else.

5. Add some distortion/overdrive to the bass guitar. Yes, that’s right folks. A small amount is all that’s usually needed—just enough for a little “hair,” more felt than heard. An outboard effects processor can be used to do this, or something like a Sansamp BassDriver, which has a built-in overdrive circuit just for this purpose. EBS also makes an overdrive pedal for bass as well.

6. Compression can be a useful tool. The initial “hit” or “pluck” of an instrument is called a transient, and the attack control of a compressor can be used to change that initial transient to a “softer” transient (faster attack) or a more pronounced “harder” transient (slower attack).

Compression can also bring note definition to a bass guitar by making the quieter notes louder and the peaks of louder notes softer. This is accomplished by using higher ratio settings (such as 6:1 or greater), and bringing up the make-up gain to the same amount as to what you’re compressing/limiting. The peaks will now be controlled, and the make-up gain will bring up the softer bass guitar notes to a more discernable level. (Read this for more about compression.)

7. Ask the bassist for more “high end” if the bass is coming across as muddy. Note the choice of words: high end. I’ve found bassists to be resistant to the term “treble,” but a phrase like “Hey bass dude, can you give us more high end because your sound is a bit muddy right now” can produce the desired result in these situations.

8. Parallel process the bass or kick by multing (multiplying) a channel.

9. Use a drum trigger on the kick and blend in the triggered sample.

10. Panning. If it’s a stereo mix, try panning the kick slightly (about 5 percent) to the left, and then pan the bass the same amount to the right.

11. If the kick drum beater is made of felt, consider changing to one that’s made of harder material in order to increase the amount of “click” in the hit, which will enhance the attack of the sound.

12. Change out the bass guitar for a different one (if you have it).

13. We’ll go full circle, beginning where we started: Change the mic (if you have it) on the kick. Mics for kick produce different tones due to their frequency responses. For example, check out these frequency response charts of two popular kick mics: 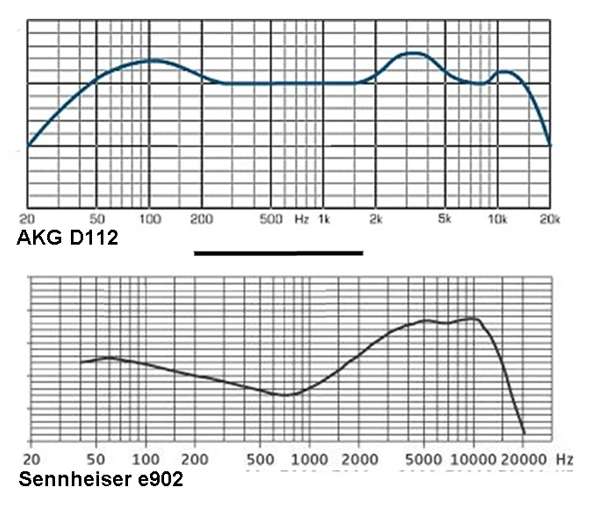 As you can see, the sound captured by these mics will sound be significantly different. The AKG D112 has a bump in the 100 Hz range, while the Sennheiser e902 has a steep mid-range cut. They handle the upper mid-range area differently as well.

It goes to being thoughtful in your approach to the voicing of each instrument in the final product. For instance, if the bass guitar has a really rich mid-range tone, the e902 on the kick drum could prove to be a great choice because of its cut in the same mid-range area. This can “carve” a space for the bass to reside in, and will sonically “move” the kick drum out of the way.

One of these things may be all that’s needed to attain the desired separation, so stop when you get there and move on to the next challenge.

Casey Campbell is an audio educator who heads up Sound Instruction (www.soundinstruction.net), a website dedicated to live sound training.