Family-owned business provides outdoor systems in the Florida Keys and the Caribbean with custom-built loudspeakers driven by 1204, 2404 and 4804 amplifiers.

Since its founding in 1960, D’Asign Source has been a ‘one-stop shop’ for personal residences and businesses in the Florida Keys. The second-generation family-owned business has seen tremendous success in large part due to its diversified vertical competencies, focus on outdoor installations and overall obsession with quality. Coastal Source, the company’s lighting and audio focused subsidiary, was formed in 2003.

Two years ago, Franco D’Ascanio, president of Coastal Source met with Powersoft’s Claudio Lastrucci at a trade show to discuss audio options and possible synergies between the two companies. Since then, the Powersoft’s Quattrocanali amplifier platform has been a go-to solution within Coastal Source’s equipment ecosystem — which in addition to its local market in the Florida Keys and the Caribbean, includes a network of 600 dealers located throughout North America.

While outdoor audio and lighting are key components of Coastal Source’s business, its parent company D’Asign Source brings resources to bear in architecture, engineering, construction, electronics and landscaping/nursery. Despite possessing all these skill sets, running a multi-faceted outdoor solutions business in the Florida Keys can present some unique challenges.

Firstly, the Keys can be host to some of the most punishing weather on earth — and while the outdoor installation market is lucrative, there is no margin for error or equipment failure. Second, the entire population of the keys consists of roughly 70,000 people spread across an island chain of just 110 miles. Therefore, to succeed in its market that consists primarily of upper-tier residences, customer loyalty and repeat business is of paramount importance to Coastal Source.

When Coastal Source was established 15 years ago, the company benefitted from a shift in outdoor living investment, according to D’Ascanio, who estimates that many properties now spend approximately 60 percent on the house and as much as 40 percent on the outside environs.

“We are very fortunate to have the majority of market share in the higher end properties here,” D’Ascanio says. “But what we found was that getting a customer and keeping them for life is critical. Running a business here is a stark contrast to say, New York, Palm Beach or some other place where once you finish a job, you can essentially walk away since there is an unlimited pool of customers. So we are not only proud that we have repeat customers, but also have developed vertically aligned competencies so we can meet them at their point of need whenever they require support.”

Coastal Source made the decision years ago to manufacture its own installation loudspeakers, primarily because existing products on the market were just not suitable for the demands of the outdoor environment. The result has been a lineup of custom made products: “Our speakers are very high quality, made of waterproof and corrosion-resistant materials. They also have a patented wiring system,” D’Ascanio says. “The amount of SPL, frequency response, musicality and dynamic range in our systems are untouchable.” 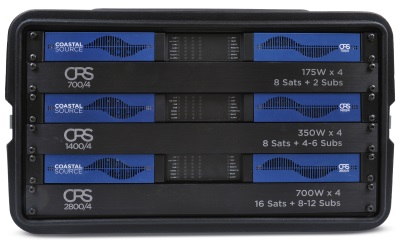 For the higher-end, rackmount-based audio installations, D’Ascanio turned to Powersoft. “We wanted high performance and reliability,” D’Ascanio recalls. “We also wanted simplicity and ease of use. Our cabling systems are plug and play and this is very important. We had a pretty fundamental need where users wanted to use rack amplifiers — and we didn’t make these.” After speaking with Powersoft’s R&D director Claudio Lastrucci, D’Ascanio was drawn to the Quattrocanali’s ability to handle low impedance loads efficiently: “Most of our competitors use 70-volt systems, which ease the load on the amp and are easy to implement. But they take a huge toll on sound quality and dynamic range.”

“We ultimately decided on the Quattrocanali because our systems are either bi-amplified or tri-amplified. From a power perspective, we will usually go with either the 1204, 2404 or 4804 models — this range typically matches the power requirements and quality of the speaker models we’re using.” D’Ascanio says that the Quattrocanali typically punches well above its weight class in terms of specs: “The power that we get out of a 1U unit in a 4804 is substantial, where rack space is often an issue also, the flexibility is very significant since we are able to matrix the inputs and move them around as needed.”

D’Ascanio say that Powersoft’s Armonía, the remote control and monitoring software plays a crucial role in Coastal Source’s audio installations. “Firstly, because we are bi-amplifying or tri-amplifying, the electronic crossovers are critical to the system performance and the survivability. So every system that we send out is set up and configured in Armonía.” The software also helps D’Ascanio’s team address the many variables such as speaker type, number of speakers and how they are mixed and matched. “What’s best for the fire pit may not be what is best for a volleyball court or a huge pool area,” he explains. “The software greatly simplifies the configuration process and gives us greater predictability on quality and performance.”

“We believe that the system is only as good as its weakest link and we have great sounding systems,” concludes D’Ascanio. “Based on our education and system matrix, we believe we have the right amps for the right speakers and we love the reliability of Powersoft. We believe that a system should be installed once and that it should work.”

Aside from flexibility and reliability, D’Ascanio says that it always comes down to sound quality. “We do many ‘shootouts’ with our competitors in outdoor spaces, and we win an extremely high percentage of those — very close to 100%,” says D’Ascanio. “Ultimately, sound quality is the deal closer. Our customers value sound quality and we will continue to making superior products for their intended purpose. We are proud that Powersoft is a part of that and will continue to be in the future.” 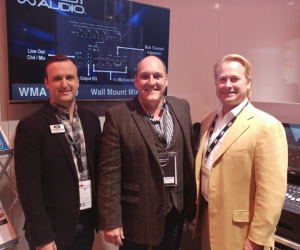