The question "how many watts?” can have many answers...

Quick! What is the approximate expected SPL at 4 meters from a loudspeaker with an average sensitivity of 100 dB-SPL (1 W/1m) driven by a 200-watt power amplifier playing pink noise? Got ya, didn’t I?

If you had to think about that for very long, or even whip out a calculator, then you’re a victim of a very poor rating system that is used for power amplifiers. The unit is named for Mr. Watt, but I doubt that even he would endorse its use for audio calculations.

We’ll solve the problem mentally with simple addition and subtraction, after a little ground work. You will be able to perform complex amplifier calculations in your head, amazing your friends at parties and possibly even improving your love life. I’m an optimist.

Since the human hearing system perceives power changes proportionally, linear units such as watts and volts are not terribly useful. The Audio Fathers dealt with this dilemma early in the last century by creating the decibel system.

To compare various power ratings, I’ll pretend that I have a 16,000-watt iPod. Nice! It is connected to a dummy load resistor and is generating a 1 kHz sine wave. Each click of the volume control is 3 dB (true in real life), so the chart has a range of seven “clicks.”

Each click generates twice the power, and slightly higher SPL than the previous. This unlikely example serves as a reminder that doubling the power is a meager level increase, even though it may require a lot of watts.The values on the chart could represent a range of amplifiers from a manufacturer. 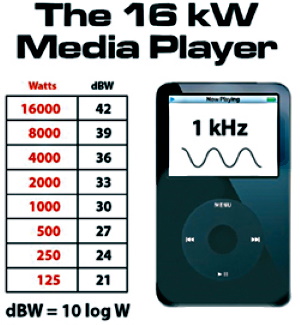 For you math types, here is the formula:

Where W2 is the amplifier’s sine wave rating in watts and W1 is a reference power of 1 watt (Hint: You don’t have to perform the division since we are dividing by 1).

The equation simplifies to dBW = 10 log W. Each power level is how the amplifier would compare in level to a one watt reference.

If you just memorize the chart, you won’t even need a calculator. One nice thing about power amplifier calculations is that you only need to get close.

These are typically sine wave ratings, but can be scaled to “pink noise” ratings (which are more like music) by simply subtracting 10 to account for the higher crest factor of pink noise as compared to a sine wave. (The sine wave has a 3 dB crest factor, and pink noise is about 12 dB, or “9 dB higher” than the sine wave. 10 dB is close enough and is easy to work with).

The resultant level in dBW can be added to the loudspeaker’s average sensitivity to determine the SPL at 1 meter. The 1-meter SPL can be extrapolated to a greater distance by simply halving it for every doubling of distance, which is the inverse-square law rate of level change. How about an example?

So, practice subtracting 10 and subtracting 6 (repeatedly) from your starting values and you can quickly estimate the SPL from any loudspeaker with any amplifier at any distance.

The decibel has done exactly what it was designed to do – make audio simpler, more intuitive, and most of all, provide a meaningful representation of the level change that results from changing the power. Amplifiers should be rated in dBW, not watts, for these reasons.

Now, I’m not naive enough to think that amplifier manufacturers will actually publish dBW instead of watts. A large percentage of their customers would not understand their specs, and their tech support phone calls would go through the roof (and maybe their sales through the floor!).

You will have to make the conversion yourself with the chart. You will have the typical amplifier sizes memorized in no time. In light of these facts, can an amplifier have a higher power rating than the outlet from which it is powered, as some modern amplifiers claim to? Are these legitimate ratings or is it the 1970s revisited?