The question "how many watts?” can have many answers...

In The Real World

The ideal amplifier is a constant voltage source.

This means that the output voltage (which is of course an audio waveform) is not affected by the load impedance.

Let’s fix the output voltage to 30 VRMS (about 100 watts continuous into 8 ohms) and consider what happens as the load impedance changes. Please see Figure 3, below.

Each halving of the load impedance doubles the output current and therefore the output power of the amplifier, so long as the voltage remains constant.

So, the more paralleled loudspeakers, the more watts. 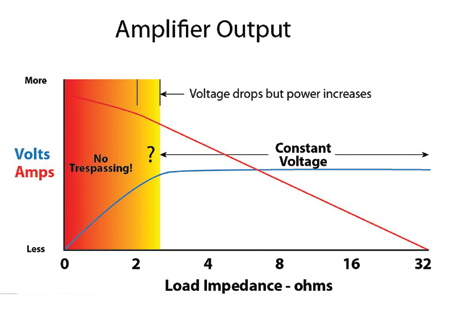 Real-world amplifiers behave as ideal voltage sources into typical sound reinforcement loudspeakers. You can load them with one or maybe two 8 ohm loudspeakers, and the output voltage is not affected. Like the ideal amplifier, the power doubles as the load impedance is halved.

At some point, this relationship no longer holds and the voltage drops as you daisy-chain more loudspeakers onto the amplifier, even though the output power increases (The yellow region of Figure 3). Below about 3 ohms, this amplifier is no longer a constant voltage source.

Note that since the current is impedance-dependent, a box that can handle a large RMS voltage may not draw much power, if its impedance is high. This can bea useful attribute if I need to parallel line array boxes onto a single which is a very common practice. I’measured units as high as 60 ohms.

A “power” mindset says “load it down because you get more watts.” But note that even though the output power is increasing in the “yellow zone,” the output voltage is decreasing. If your loudspeakers are covering different zones of the audience, adding additional loads beyond 4 ohms may cause a level drop in the already-playing loudspeakers (Figure 4). 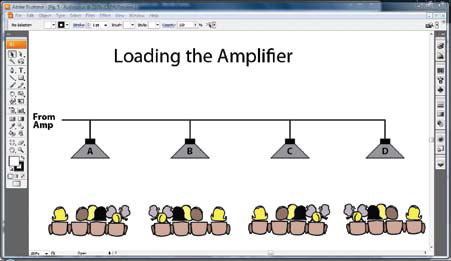 You get the most SPL from Box A if you disconnect the other boxes. In short, the amplifier’s best performance is achieved when it is not overloaded. The impedance of a real-world loudspeaker is higher than its “rated” impedance over most of its bandwidth.

While some amplifiers can handle “2 ohm loads” it would be rare to ever encounter a true 2 ohm load in practice other than with a bank of test resistors.

Besides the voltage drop, there are other reasons why very low impedance loads (i.e. 2 ohms) are problematic. The lower the load impedance, the heavier the required wire gauge. Heavy gauge speaker wire minimizes line loss and preserves the amplifier’s damping factor (significant for subwoofers). Cables for 2 ohm loads must be kept short or they may get ridiculously heavy.

We wouldn’t dream of putting weights in the trunk of our car to make it produce more power. It is equally silly to load down an amplifier to get more watts.