Clearing Up Misconceptions And Clarifying Constant-Voltage

Why a “70-volt” system? A good question, and one that causes a lot of confusion among audio practitioners.

Some common misconceptions about 70-volt (actually 70.7-volt) distribution systems:
— There is 70.7 volts on the line at all times.
— The 70.7 volts is a “carrier” that the audio is riding on.
— A voltmeter across the line should measure 70.7 volts during the operation of the sound system.

And there are many more.

With that in mind, let’s take a look at the basics of this type of distribution system.

Part of the confusion is due to the choice of terms. This is a constant-voltage distribution system, meaning that the voltage at the output of a component is not affected by the load impedance.

So, whatever measured voltage exists (i.e., 1 volt, 10 volts, 70.7 volts, and so on) from any type of signal (sine wave, square wave, pink noise, music – it doesn’t matter), that voltage will be unaffected by changing the load on the amplifier. In other words, it doesn’t matter if the amplifier is driving one loudspeaker or 100, the line voltage will be unaffected by the number of loudspeakers on the line.

Virtually all interfaces in a sound system are constant-voltage – it is unfortunate that this term has become associated uniquely with a means of distributing signals to zones of loudspeakers.

Figure 1 shows how a typical 100-watt amplifier might be interfaced to a loudspeaker. For simplicity, the loudspeaker is represented as a fixed-value resistance.

This is a constant-voltage interface, because the voltage across the amplifier’s output terminals does not depend on whether the loudspeaker is connected or not. 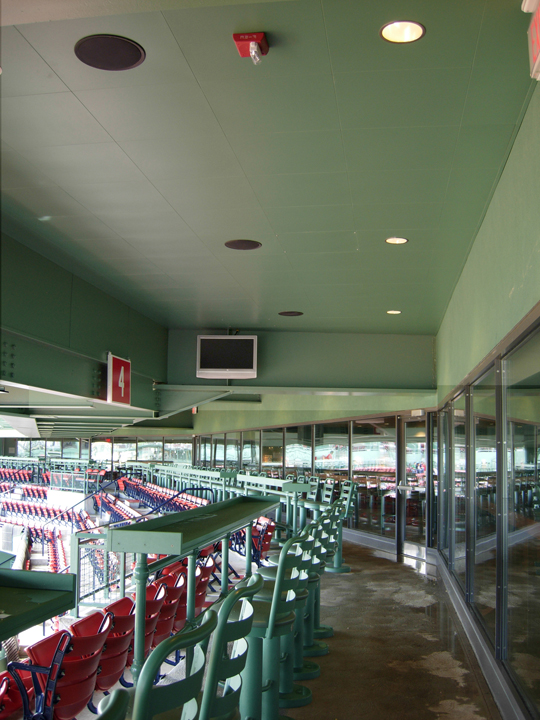 A drawback of this interconnect method is that due to the very low loop impedance (the amplifier plus the loudspeaker), the voltage across the load is affected by the wire resistance.

If the wire must be long, the increased resistance affects the signal transfer between amplifier and loudspeaker.

It works just fine for hooking one or two loudspeakers to a single amplifier through several feet of cable.

Your local power company has the same problem – the need to provide a waveform to numerous loads (homes and businesses) while reducing the cable losses.

The method that they use involves taking the power from the generator and increasing it to higher voltage and lower current by means of a step-up transformer. Since the current is lower, a smaller wire can be used.

The process is reversed at the other end of the line with a step-down transformer, which also has another effect – it makes the impedance of that the load presents to the line much higher. This allows many loads to be placed on the line without excessive loading of the source.

Two things have been accomplished though all of this – the wire losses have been reduced and the number of loads that can be driven has been increased.

The same method can be used for audio signals. The amplifier output signal is ratioed to higher voltage/lower current, effectively reducing the required wire gauge (Figure 2).

70.7 volts refers to an accepted distribution voltage (determined mainly by code considerations), and describes what would be measured if a sine wave were used as the signal (like the power company).

Since we don’t usually feed sine waves to loudspeakers, the measured voltage will vary. 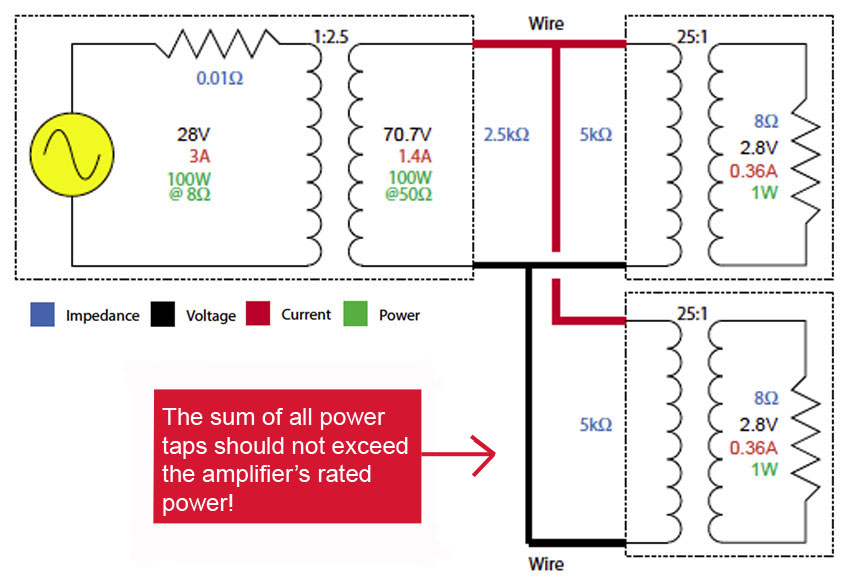 Also, if one assumes a sine wave and fixed load values, the load on the amplifier can be determined by summing the power drawn by the loads, hence the “wattage taps” on distribution transformers.

— The 70.7 volts is the RMS value of the largest sine wave that will “fit” through a 100-volt bipolar DC supply. Typical program material will have a much lower RMS voltage.

— If the voltage and impedance values are assumed to be fixed (they’re not) then the signal transfer can be described using power rather than voltage or impedance. This makes it easier to keep track of how the amplifier is being loaded, but more confusing in that these power values are only true for the rated voltages and impedances.

— This whole distribution scheme can be described using a power model, voltage model, or impedance model. All three are included in Figure 1.

— The impedance meter is the tool-of-choice for troubleshooting such systems, as it reveals the electrical impedance of the line including the effects of all loudspeakers, transformers, and wire. It effectively shows “what the amplifier is looking at.

— When the amplifier’s output voltage is ratioed to a higher value, so is the minimum impedance that it can safely drive. For instance, a “28 volts at 8 ohms” amplifier becomes a “70.7 volts at 50 ohms” amplifier with a step-up transformer.