Once your praise band moves to in ears, do you have a plan for ensuring that everyone is truly hearing the best mix possible?

I am an audio engineer, a bass player, and a skeptic.

So, when I first saw the Guitammer Buttkicker system, I’m afraid it was the skeptic that spoke up sarcastically: “Oh boy. Another gimmick! Yet another electronic toy to pay for!”

But it was a cool idea, so I still went right over to look at it.

I sat down on the drum throne (why is it that drummers need a “throne” and everybody else gets “chair”?) and it was immediately evident why they’d named the product the “Buttkicker.”

They were playing some tracks through the system, and I was feeling it in my hindquarters.

Mostly, I was feeling the low frequencies: the bass guitar and the kick drum, as a drum throne and the flesh sitting upon it are not very efficient high frequency transducers.

However, being a bass player, those were the frequencies I was interested in anyway.

As, a bass player, there’s no such thing as too much kick drum.

If the band is going to be tight, then it starts with the bass and the kick drum being tight.

Since I am a “sound tech who plays bass” rather than a “gifted musician”, staying tight with the kick drum has been a slight challenge for me on more than one occasion. 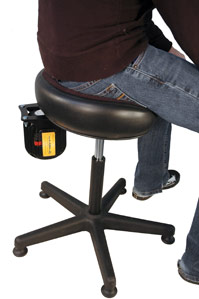 A friend of mine was showing off the Buttkicker system, and he knew that I played bass, so he drew me to the bass player’s position on the stage and had me stand on a funny little platform.

It vibrated my feet, but they vibrated in time with the kick drum and the bass guitar: same principle, but we bass players take it standing up!

Aside: Since then, I’ve played bass sitting a wooden stool on the bass player’s platform and benefited significantly from this very Buttkicker effect . . .

“Now listen to this!” my friend said, and he pulled me off of the platform, clamped some good headphones on me and pressed play on a multitrack recorder.