Headphone extensions have been the bane of many a sound engineer’s existence. The cables on in-ear monitors (IEMs) are never long enough to get from the musician’s head to the personal mixer, which means we need to provide some sort of extension cable.

In the past, I’ve tried buying 1/4-inch headphone extensions and used 1/4-inch to 1/8-inch adapters, but those cheap, off-the-shelf adapters are very stiff and the adapters don’t always work.

We’ve also tried making our own. I found some super-thin cable and put a 1/4-inch TRS (tip-ring-sleeve) on one end with an 1/8-inch cable end on the other. Those worked well; at least until the 1/8-inch ends started failing—which was about week three.

We then switched to regular cable (Mogami 2792) with a TRS on the PM end, and a locking 1/4-inch cable end with 1/4-inch to 1/8-inch adapter on the other. We even zip tied a carabiner to the musician’s end so they could clip to to their belt loops. Those work OK, but we’ve still had issues with the adapters (usually the left side cuts in and out).

John David pointed me to the Elite Core booth and said they had made exactly what we had talked about. Sure enough there it was. 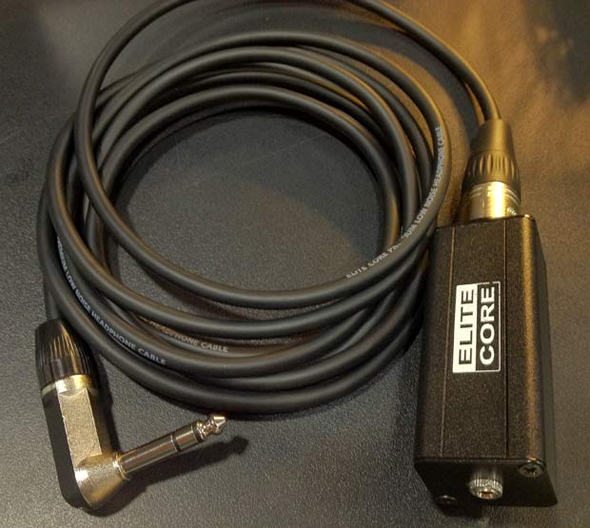 It’s a model of simplicity; a roughly 1-inch-square box about 3 inches long with a XLR(F) on the bottom and a 1/8-inch panel mount on the top. A simple spring steel clip attaches the box to your belt. It’s made from an aluminum extrusion with metal end caps and lists for $20. Sold.

You can also buy cables to go with them; they stock 10-foot and 18-foot versions with a right angle 1/4-inch on one end and the necessary XLR(M )on the other. I was told by Chris Ward of Elite Core they went with an XLR(M) on the cable because you can’t accidentally plug anything into it. That’s good thinking; you don’t want to have to troubleshoot a mic that’s plugged into a headphone output.

This is not a flashy, exciting product. But we’ve been using one on our stage and the guys love it. The belt clip holds the pack securely, the cable is flexible and the RA 1/4-inch is neater than the straight ones we used. If you are using Aviom, Roland, MyMix, or Momentum personal mixers—or headphone amps—this is something your musicians will really appreciate. The cost is reasonable, and they are well made. I ordered three more sets.

You can find them at your favorite Elite Core Audio dealer such as ChurchAudioGear. I got mine from Gear Techs. CCI Solutions will also be a dealer very soon.