One of the challenges we face as church sound engineers is to get consistent levels on our recordings.

Almost every church I know of records it’s services, either on hard disk, CD, video, cassettes (the horror!)—or a combination of those.

Unless you have a dedicated recording mixing position, getting the levels consistent on those recordings is tough.

Announcements, and teaching however, falls in the high 60’s; figure 65-68 dBA SPL. Some quick math means that we have a good 25 dB difference between the levels of our loudspeakers and our band. Our ears are fine with that, because it makes sense in context.

For a recorder, however, 25 dB is a big difference. If I set my input level on my CD-Recorder for good levels during the music set, my sermon will be way too low.

On the other hand, if we try to maximize the level for the sermon, the music set will not be pretty.

One way to handle that is to manually adjust the input levels (or change the output level from the board, depending on how you are set up).

But that can be tough, especially when going right from a song to a message, which we often do.

I could run the signal through a compressor, but applying that much compression to music will suck all the life out of it. There are auto-level devices that do a decent job, but they are expensive and add another piece of equipment to the signal chain.

Using our DIGiCo SD-8 console, I think I’ve hit on a good solution using Groups and the Matrix mixes to control and equalize output levels. Here’s what I’ve done.

The first step is to identify my “groups” of levels. In other words, how can I place all the sources on my stage into buckets based on their level.

I broke it up this way:

On the SD-8, it’s easy to send channels to groups; just select the channel and turn on the group send(s). All of my channels go to the Master group (which feeds my house PA).

Each channel also goes to the appropriate group based on what it is. Unlike a mix bus, a group has no dedicated send control for each channel. It is simply assigned there by a switch. The level a given channel hits a group is based on the input gain and fader position.

Those four groups are routed into four channels of my matrix (actually, it’s six, I do the same thing with Lobby & Cry Room); Video Rec L&R, CD Rec L&R. Very soon I’ll be using an external 4×8 system processor to split those up, but for now I’m splitting them on the board. 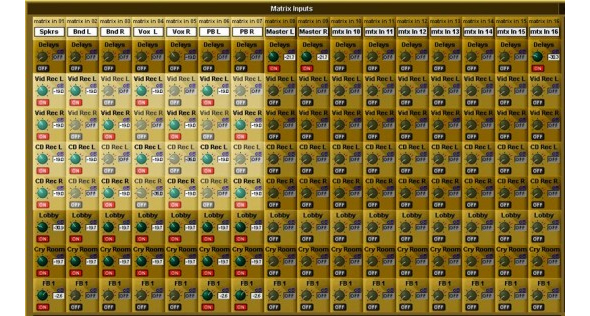 Routing signals into the matrix is easy on the SD-8.

Routing signals into the matrix is easy on the SD-8On the SD-8, I have several places where I can adjust the level of those groups feeding the matrix.

I originally set the relative levels on the matrix page, but then decided that was going to be too cumbersome to change on the fly. I decided to bring each group into the matrix at the same level, then adjust the outputs of the groups to equalize the levels. 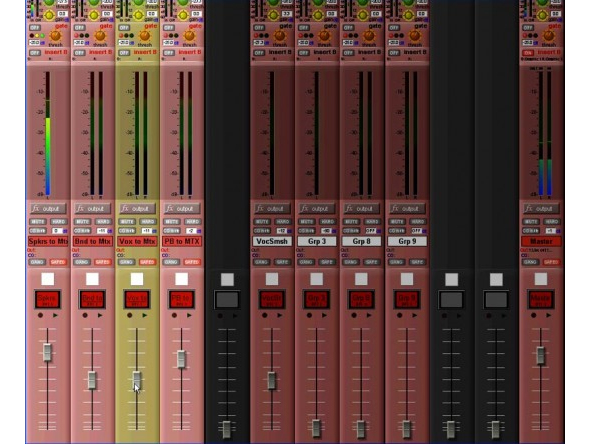 Left to right the groups are Speakers, Band, Vocals & Playback.

Left to right the groups are Speakers, Band, Vocals & Playback. As you can see, the speaking mics are the highest, music and vocal mics are lower and playback is in the middle.

When the output of the matrix channels hits the recorder, my levels are consistent throughout the entire service. The best thing about this is that the dynamic range of each section is in tact.

I do apply some high-threshold, high-ratio compression to the outputs of the matrix sends to make sure we don’t clip the record levels, but it’s set to engage only rarely.

This process has been a great boon to my workflow. I don’t have to remember to adjust my record output any longer, and my levels are spot on all the time.

Our video recordings are more useful now (now that the ALC isn’t clamping down on the music all the time), and board mixes translate much better. I’ve also “safe’d” the group sends and the matrix outputs so they don’t inadvertently get changed in a snapshot.

This set up is easy on the SD-8 as it has a flexible and customizable bus structure. You may have to play around with your console to come up with a similar routing system, but hopefully it gives you some ideas to get started with.

Mike has been involved with church sound and live production for more than 25 years, and is the author of the Church Tech Arts blog. Based in Nashville, he serves as the Maker of Magic for Velocity Pro Systems, which provides design-build production solutions for churches and other facilities.
All Posts
PrevPreviousAllen & Heath Debuts New ZED60-14FX Compact Analog Mixer
NextChurch Sound: Simple Stage Planning In Four Easy StepsNext
Top Stories
Explore All Study Hall