Church Sound: Three Ways To Mic A Hammond B3 Organ

Capturing great sound from an icon of modern music

The Hammond B3 is one of those iconic sounds of modern music. And by modern I mean since about the 1950s or so.

It was the invention of Lawrence Hammond. A serial inventor, he figured out that the synchronous motor he used in the first electric clock could produce musical tones.

In 1934, he unveiled the Hammond model A. They were originally sold to churches as a substitute for pipe organs.

In 1954, Hammond introduced the B3. When paired with a Leslie 122 rotary speaker, the sound was born. Starting with Jimmy Smith, Booker T. Jones, The Rascals and dozens of other bands in the ‘60s and ‘70s, the B3 became a staple of jazz, R&B and rock music.

The combination of the tone wheels that can produce a full chord of harmonics with a single key and the dual rotating speakers of the 122 cabinet produce a distinctive sound that is unlike any other.

I encountered a real, live B3/122 combination for the first time at a music festival where I was stage camera man. I don’t recall the artist that was on stage, but I’ll never forget walking past the 122 for the first time and being transfixed by the sound. Since then, I’ve been enamored with the rich, full and complex tones a B3 can produce.

Over the years, the churches I’ve mixed for have used synths to generate a B3 sound. And while the new ones are getting pretty good, there’s nothing like the original.

My friend Bob Heil is an avid organ player, having started playing as a teenager. Over the few years I’ve known him, he’s given me a few suggestions on how to mic a B3 (really, we’re mic’ing a Leslie 122, which is driven by a B3, but most people just call it the B3.) A simple block diagram of the Leslie 122 speaker.

When I arrived at Coast Hills a bit over three years ago, they were using a pair of AKG C414s to mic the B3, one on top, one on the bottom. This brings up a key point; a Leslie 122 has two speakers, a top rotating horn (known as the treble speaker) and the bottom, bass speaker, which is pointed down and fires into a rotary drum with a scoop in it. As the two speed drum goes around, it utilizes the doppler effect to create a distinctive sound. 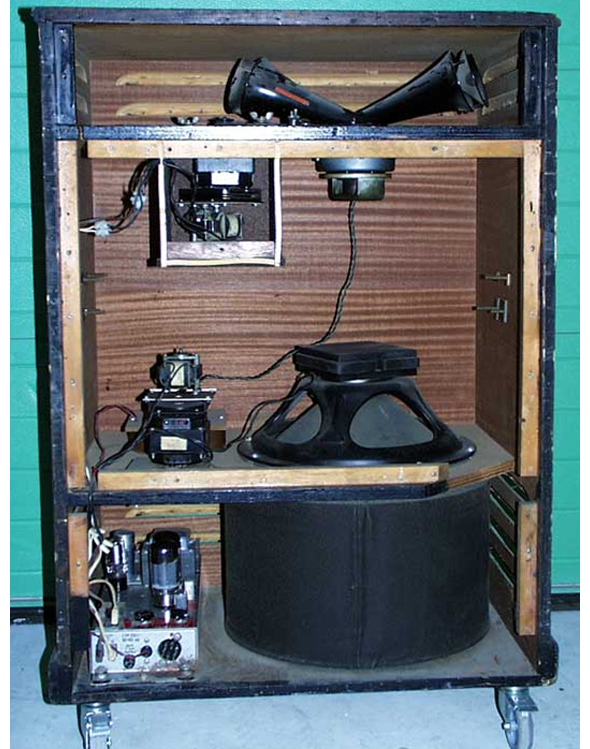 The inside workings of a Leslie 122 speaker. (Credit: Kompoz.com)

Incidentally, the rotating horn actually has two horns on it, but only one produces sound. The other is there for balance. Fun fact.

Anyway, with two mics on a B3, you do get some sense of separation between the lows and highs, and you can tell it’s a B3, but it doesn’t sound great. At this point, we hadn’t yet moved the 122 into an isolation room, and because we’re using 414’s, there is plenty of bleed in the mic’s. The rotating horn of a 122. Only one horn produces sound.

Also, because we’re only using a single top mic, you don’t get any stereo imaging. Here’s what it sounded like back then: B3-1.mp3

Then I talked with Bob. He told me that one of his favorite methods for mic’ing a B3 is to use two mics on the top, rotating horn, located 90 degrees to each other, and flip one out of polarity. A single mic picks up the low frequency at the bottom.

As you might expect, the mics of choice were Heil PR-30s (he said 31s, but I used 30s because they’re a bit cheaper and the same element) for the top and a PR-48 for the bottom. Our second (but really my first) attempt to get really good sound from the B3.

Our second (but really my first) attempt to get really good sound from the B3.

As it happened, I had just pulled my 48 out of the kick (replaced by an RE320, but don’t tell Bob that…), so that went to work on the low. I ordered a pair of PR-30s and set them up as described. We also moved the 122 to an iso room to really clean up the sound. Wow…what a difference. Take a listen: B3-2.mp3

That worked great for almost a year. Then I interviewed Bob again, and we again got talking about B3s. This time, he suggested I try putting the mics on opposite sides of the top cabinet and keep them in polarity with each other. The 48 stays down low.

The stereo separation is more pronounced, and I actually exaggerate it in the PA by using the SD8’s ability to decode stereo sources as extra-wide.

By doing that, the high organ sound is pushed way out to the side of the mix, where it creates some super-cool ambience, without getting in the way of the vocals.

And when I flip on the new DigiTubes and crank them up (another new SD8 feature), it sounds amazing. I’ve said it before on the show, but I’m impressed that I replace the 414s with three mics that combined don’t cost what a single 414 does. Which is why I love me some Heil microphones. The current mic set up. And boy, does it sound nice!

The audio files in this post are straight off the pre-amp with no processing. I tried to upload AIFF files, but they wouldn’t play in a browser. So they’re 256 kbps MP3s encoded with LAME. You’ll probably want a good set of speakers or headphones to really hear the difference in the samples. Enjoy!

By the way, much of the research on the history of the B3 came from a video I found on Bobby Owsinski’s Big Picture Production Blog.

Mike Sessler is the Technical Director at Coast Hills Community Church in Aliso Viejo, CA. He has been involved in live production for over 20 years and is the author of the blog, Church Tech Arts. He also hosts a weekly podcast called Church Tech Weekly on the TechArtsNetwork.