Some custom cables, snakes and pre-wiring will make your stage setup go a lot faster

Last time around, I talked about how input lists can make stage set up easier (here).

Today, I’ll move out of the office and on to the stage.

Optimize Stage Cabling
Sometimes, I’m appalled by the cabling I see on church stages. There I said it. I can’t tell you how many times I’ve seen 25- or 50-foot cables running 6 feet, with a giant rat’s nest of a coil either at the snake head or at the bottom of a mic stand.

Drum risers are often the worst. I remember arriving at Coast Hills and finding literally 200 feet of mic cable strewn all around the kit. This post is not specifically about it, but if your stage looks like that, please learn how to solder and make cables that are the right length, OK?

Let’s consider each one.

Custom Cables
There is no reason to run a 25-foot mic cable from a snare mic to a drum snake right below it. It’s just a mess. At least buy 10-foot or 6-foot cables.

We’ve chosen to build custom cables for our drum kit (and a bunch of other stuff). The drum kit doesn’t really get set up differently (other than the occasional swap right- to left-hand), so there’s no reason not to make the cables just as long as they need to be and not much longer. We even put right angle XLRs on all the mic ends to really clean it up.

Each end of the cable is labeled as to what it is, and the snake is labeled as well. We have a Whrilwind 12-channel snake sitting on the drum platform, so that’s where all those cables plug in.

With no extra length to work with, the elves that come in overnight to tangle the cables just get frustrated and leave.

In retrospect, I would have flipped the labels on the silver XLRs. Someday…

We also built custom cables for our percussion set up. We use two mic’s on a stereo bar for the congas, so I built a two channel cable with right angle XLRs on the mic ends. The overhead mic is also connected via a custom-length cable that we measured in-place (and added just a little to be safe). All ends are labeled.

We also built some custom cables for the Roland M-48 personal mixers. They consist of a 2-channel audio cable for running back to the IEM transmitter rack and a tactical Cat-5 for REAC data.

Both cables are loomed together using TechFlex F6 split loom. Again, all ends are labeled, so it’s easy to keep straight which one is going where.

Anything that gets set up the same way every time and can benefit from custom cables gets custom cables. Set up and take down go much faster (when we take it down, which is not often).

Custom Snakes
I have a 2-channel snake built and labeled for our worship leader’s electric guitar rig—he plays through a Fractal Designs Axe2, which outputs a stereo signal.

We have another one that I built just to have, but has now become the 2nd electric guitar snake, as our second guitar player has the same setup. 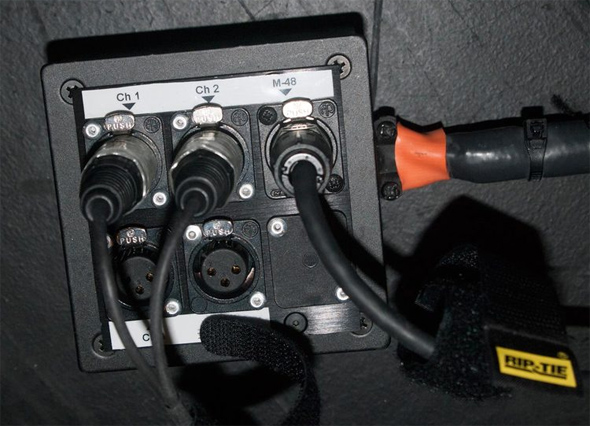 I’ve written up this inexpensive stage snake head before, but it gets used for our percussion/winds platform. As mentioned last time, we typically have either perc or winds, not both.

Since I needed three lines for percussion or two for winds, I built a 4-channel snake, and loomed in a tactical Cat-5 for the REAC data for that player’s M-48. That fourth channel doesn’t get used often, but it’s nice to have.

The piano position has an eight channel snake running over to it. We use the first two for piano, the next two for synth 1, two more for synth 2 (when needed) and have an extra pair to return the output of the M-48 to the IEM transmitter rack if we need to. 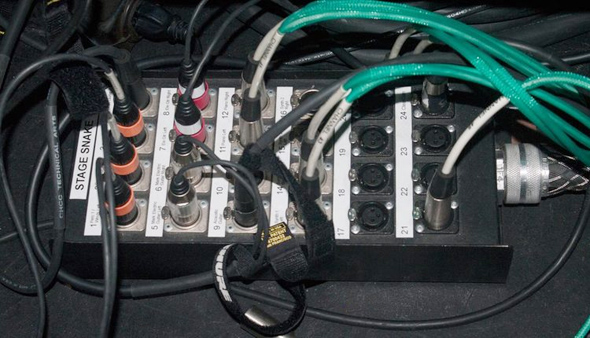 This lives at the back of the drum riser, out of sight from the house.

Our stage snake used to be a 16×4 unit, but we never used the returns. So we swapped out the males for females and made it a 20×0. If we ever need returns, we just gender-reverse a few channels.

We went the extra mile and labeled the inputs not only by number but also by function, so it’s easy to remember where things go. A volunteer doesn’t need to remember that the acoustic guitar goes into input 9, they just look for the input labeled acoustic guitar.

And because our input list handles everything we need, it doesn’t need to be changed except under very rare conditions (e.g., Christmas & Easter).

Pre-Wiring
I like to keep my stage neat, and don’t like to have a bunch of unnecessary cables lying around. Still we’ve made the decision to leave much of it pre-wired.

Since we have a bunch of skirted decks on stage that we can coil cable up out of sight, we do. The aforementioned 2-channel guitar snakes are always in position, as is the 8-channel piano snake and the M-48 cables.

Many of them live in neat coils at the front of the drum riser, where they stay out of sight until needed, but are already pre-patched. 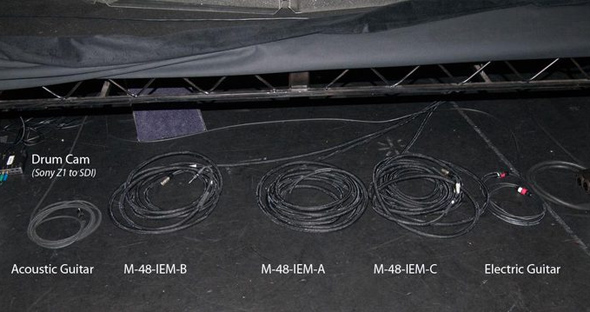 The drum kit stays wired up, as does the Leslie cabinet. We also keep many of our musician positions pre-wired with tactical Cat-5 for the M-48s. Basically, if it’s a “backbone” type cable, we leave it in place. Short patch cables will get torn down at the end of a weekend.

But now that I’m thinking about it, that amounts to the 2-channel line we use for the woodwind player’s rig (he’s stereo, too) and the three percussion cables. Oh, and the occasional 2-channel for synth 2, which runs around the piano to the front, and connects to the piano snake.

Again, this works for us because we don’t change up our stage, and like our input list, the stage is laid out to accommodate every configuration of band we’re likely to encounter. Leaving the “backbone” cables in place under mats makes set up a lot faster (the stage is done in about 20-30 minutes if we’re taking our time), and simplifies takedown.

This is a vast improvement from three years ago when it took two-three people over 90 minutes to get it done. Personally, I prefer spending that time hanging out with our volunteers.

So there you go; some custom cables, snakes and pre-wiring will make your stage setup go a lot faster.

Next up, custom boxes.

Mike Sessler is the Technical Director at Coast Hills Community Church in Aliso Viejo, CA. He has been involved in live production for over 20 years and is the author of the blog Church Tech Arts. He also hosts a weekly podcast called Church Tech Weekly on the TechArtsNetwork.

Taking with two of the key individuals about how it all went down as well as their observations as to what they see coming ...read more →