How did we arrive at our input set up, and what benefits do we see from it?

The other day I was talking with our assistant tech director, Jon, about our weekend process at Coast Hills.

We both commented on how “dialed in” everything is, and I got to thinking about the development of that process.

It really goes back a lot longer than my time here; I actually started working on this process about seven years ago.

It’s been an evolution, to be sure, and the specifics of what we do is based on my current setting. However, I think there are a lot of transferable concepts.

Over the next few posts, starting with this one, I’ll give you a “backstage tour” of some of the things that we do each week that makes our jobs easier, and produces better, more consistent results.

I’ve written about our input sheet template before, and in those posts I discussed the mechanics of building the input sheet, and how we use the power of numbers to make it faster and easier to fill out.

In this context, however, I’d like to consider another angle—the backstory, if you will. How did we arrive at our input set up, and what benefits do we see from it? 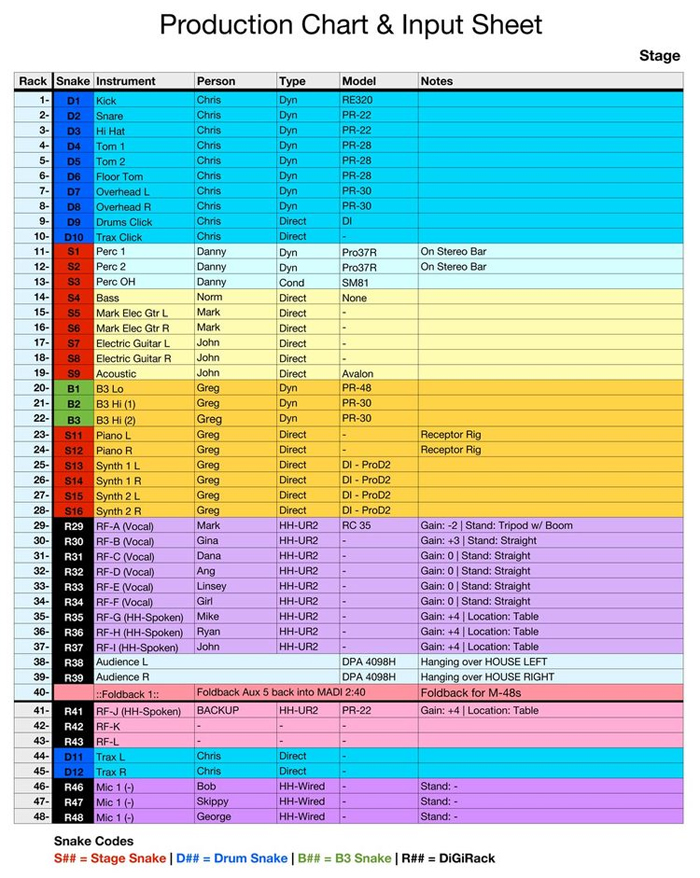 We had two primary goals in developing this input sheet:

1) The channels we wanted to have full control over in the (Roland) M-48s had to be in the first 40 channels of the input rack.

2) Devise a layout that would accommodate nearly every possible weekend band configuration without re-patching anything.

As a sidebar, we can prioritize those two goals over efficient console layout because the (DiGiCo) SD8 makes it so easy to move channels around on the surface; it really doesn’t matter what goes where, we can put any input on any fader. If I were in a different setting, I may tweak my layout some so the mixing surface makes more sense.

Let’s look at each section of the input sheet, each of which is color-coded for easy identification. The first 10 channels are for drums; well actually 8 are for drums, the other two are click tracks (one for the metronome and the other for the click coming off the tracks computer when we use it).

Those are fixed every week, and the only thing that changes is we sometimes drop Tom 1 when a particular drummer plays. Otherwise, those are constant.

The next set of inputs do double-duty. On weeks when we have our percussion player (as shown), we use three inputs, two for congas and one as an overhead. Other weeks we’ll have a woodwinds player, and in that case we use the first to inputs as a stereo send from his rig (since those inputs feed a stereo channel on the console anyway). On weeks when we have neither, those inputs aren’t used.

This is a common theme, as you’ll see.

The next section is guitars. The first three inputs are dedicated to the bass and our worship leader’s electric guitar rig. On the weekends he doesn’t play, we don’t use those inputs. We also have inputs dedicated to a second electric and an acoustic guitar.

We don’t use these often, but when we do it’s nice to not have to re-arrange everything.

Keys take up more channels than drums in our input configuration with a total of nine. Three for the B3 (two top, one bottom), two for piano, and four cover up to two synth rigs. Most weekends we don’t use synth 2, but it’s becoming more common as the guys get more creative with their sounds.

Next up are vocals. Here, we also went for nine channels, not because we often have nine vocalists on a weekend, but because do do for big events. Some of the wireless mics are pre-set for vocals, others for handheld announcement or interview mics. The later can easily be turned into vocal mics by changing the group assignments on the console.

Allocating this many inputs to vocals may seem wasteful, but it actually makes sense for us in the context of what we do. And anything that falls below this line can easily be folded back to the band without the need for individual control.

Finally, we have a pair of audience mics and a foldback channel, which is really an aux that collects everything above channel 40 plus local board inputs that need to be sent back to the band.

Starting at input 41, we have our final wireless mics for announcements and our two teaching pastors. Inputs 44 and 45 actually run in the drum snake, but get patched higher up because we didn’t think the band would mind having the tracks come back to them as a mono feed in the foldback channel.

That’s been open to debate, however, so we may be looking to re-allocate a few inputs. Most likely, we’d swap two of the wireless mics (H & I) with the tracks. Rounding out the list is three inputs dedicated to the odd wired mic we may need to patch for some reason.

You’ll see in column 2, we indicate which snake channel the input runs through. We have two snakes on stage—drum (blue) and stage (red)—plus six hardwired inputs from the iso room where the Leslie speaker lives (green). The black boxes indicate direct patches to the input rack.

Where’s The Energy? Understanding The SPL Metric “dB C Minus A”

Focusing on the additional information to be gained by looking at both C and A Weighted data together – viewing multiple metrics gives us ...read more →

In The Studio: Instrument Tuning Tips For Better Recordings

Something's not right... The tracks just don't pop the way they do in your imagination... What could it be?