Church Sound: The Many Advantages Of DI Boxes

Save time and energy, eliminate ground loops and make your audio system sound as good as possible

The most common type is called a passive DI, which includes an isolation transformer and ground lift switch.

The primary function of a DI box is to convert the unbalanced (1/4-inch 2-conductor) phone plug output on your keyboard or guitar into a low-impedance (low-z), balanced (3-conductor) XLR jack, which can be plugged directly into your signal snake without any fidelity loss or hum problems.

Once converted into a balanced signal, you can send it hundreds of feet to the console in the back of the room.

Never try to use a simple 1/4-inch phone to XLR adapter plug (without a transformer) since the hi-impedance (hi-z) output from the passive pickup in your guitar will lose most of its high frequencies on a 100-foot trip down a snake.

Even the 1/4-inch unbalanced (low-z) output of your keyboard can pick up hum down a long snake since there’s an unequal impedance feeding the input stage of the console.

Note that any unbalanced (2-conductor) cables will tend to pick up hum from every electrical appliance in the room including light dimmers and ballasts, so convert to balanced signal as quickly as possible.

The balanced input circuit (XLR Input) in the mixing board effectively nulls out these stray signals if the correct cable type (3-conductor twisted pair) and termination (XLR low-Z) are used.

Also note there’s a second 1/4-inch jack on the input of the DI box which functions to loop-through your signal to a stage amplifier. It’s not used to add the stereo outputs of a keyboard or CD player into a mono signal. Distortion or oscillation can result from hooking two outputs together without a summing circuit of some kind.

Another function of the DI box is to block phantom power at the mixing board from getting into any instruments. For instance, phantom power will send 48 volts DC back up the snake to power a microphone.

But if you plug in a keyboard or acoustic guitar directly to the snake with only a 1/4-inch phone to XLR adapter plug, that same 48 volts will feed back into the output stage of the musical gear.

Most gear only has 25-volt blocking capacitors on the output, so after a while that 48-volts can cause catastrophic failure resulting in smoke, a dead keyboard, and an expensive repair.

ALWAYS use a DI box to plug any stage instrument with 1/4-inch phone plug outputs into XLR inputs that can have phantom power.

A DI box usually includes a ground-lift switch, which will assist in breaking ground-loops in the system. A ground loop can occur when two pieces of gear are plugged into different electrical outlets. 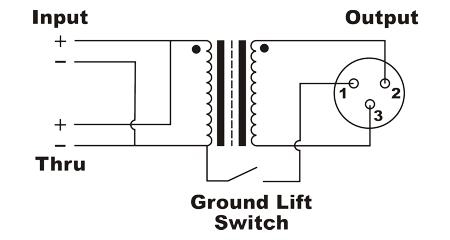 Any small difference in the ground voltages between these two outlets will cause a current to travel down the shield of the signal cable connecting them, most commonly the signal snake. This makes for a nasty hum though the whole sound system.

The ground-lift switch will open up this connection and eliminate the hum in all but the worst situations. Also, never try to stop this hum by cutting off the ground lug (third pin) on the power cord of an instrument or amplifier. That can lead to electrocution.

Mike Sokol is lead trainer for Live Sound Co. in Maryland, and lead writer of the Live Sound Advice blog. For more than a decade, he led the HOW-To workshops, teaching thousands of church sound techs. He’s a veteran audio educator as well as an adjunct professor at Shenandoah Conservatory in Winchester, VA. He also has plenty of advice about fundamentals like about electrical issues, visit his AC Power & Grounding Forum here on PSW.

Mike Sokol does sound system design and training for JMS Productions, his consulting company in Western Maryland. Visit www.livesoundadvice.com for his educational articles and videos, and email him at [email protected] with comments and suggestions.
All Posts
PrevPreviousFIR-ward Thinking, Continued
NextThe Life: Remarkable JourneyNext
Top Stories
Explore All Study Hall