Church Sound: The Art of Snare Mixing… And A Frog

I created a frog. It wasn’t intentional. Naturally, I’m not talking about a real frog but just look at that photo to the left!

You’ll never read a mixing book that says, “Make the snare’s EQ curve look like a frog in water.” If you do, immediately stop reading the book. Seriously, when it comes to snare mixing, the last place you want to be is behind the mixer.

There are three factors in creating a good snare drum sound.

1. The Snare Drum
Snare drums don’t all sound the same just like all acoustic guitars sound different. Even with a house drum kit, a drummer might bring their own snare because they like it’s sound.

Know that each snare has a unique sound. This is the baseline sound for the mix. Use the same mic and the same EQ settings with two different snares and you’ll get two different results.

Just by looking at them, you can almost hear the tonal differences:

Material composite, drum size, drum head skin, all of these are factors. Even tuning makes a difference. Snares can be tuned to match whatever the drum tuner decides is to his liking. To generalize, there can be a low or high tuning (true for any drum).

Stand near the drum kit while the drummer plays the snare. This is the sound you’ll be mixing with—not against. Don’t try making it sound like something it’s not.

2. The Microphone
A microphone should be paired with an instrument and so it is with miking the snare. The Shure SM57 pairs great with a snare drum because of its polar pattern and frequency response. I polled some techs and their pairings include the Telefunken M80, Heil PR 22, Heil PR 28, DPA 4099, and the Granelli Audio Labs G5790, a modified Shure SM57 designed for tight spots.

And don’t think mic designs are the same: 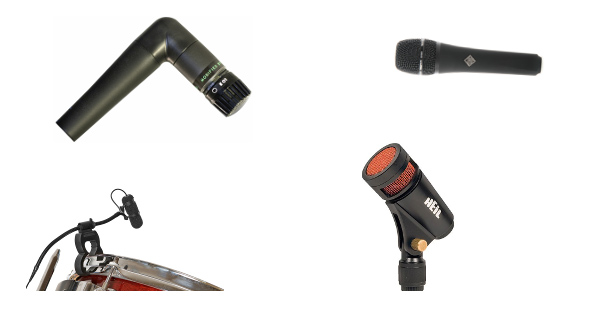 Photos are nice but let’s get real—we need to look at specifics. They can have different polar patterns, different sensitivity, and they don’t have to all be dynamic mics. For example, the Heil PR28 is a dynamic mic while the DPA 4099 is a condenser. While all of these characteristics do make a big difference in how a mic treats sound, frequency response is a major factor never to be overlooked.

The frequency response of a microphone alters the tonal characteristics of the snare drum. Take just one snare drum from my list, like the Pearl Chad Smith Signature Snare, and mike it with three different mikes. The result is three different sounds. And we haven’t even touched the EQ portion.

For comparison, here are the frequency response charts for the Shure SM57, Heil PR28, and the DPA 4099 (Note the charts with multiple lines are showing the differing frequency responses when not on-axis with the sound source): 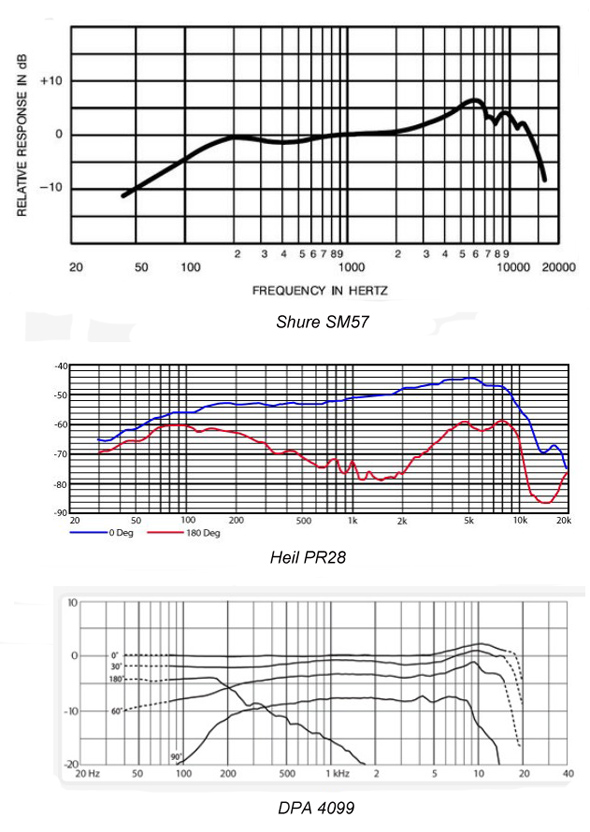 3. The EQ Work
I told you this is the last place you needed to be and now you know why. EQ’ing can only happen after we listen to the natural tone of the snare and consider the mic(s) we’re pairing with it.

Here’s an example: take a snare tuned high and pair it with a mic that has a large high-end boost. Want to cut the highs in the mix? It’s not going to be easy as you’re mixing against what is being sent, not mixing with it.

It’s not a matter of “how do I use the equipment?” It’s a matter of “what would sound right and how do I get there?” By having the right snare and microphone combination, you’ve got the hard part out of the way. (I know this isn’t always within your control.)

I like a single-miked snare. That’s not to say I won’t fall in love with a dual mic setup next weekend. A single mic setup is a good place to start. By establishing a good single-mic sound, moving into two mics, you already know how to get a good sound from one. Make sense?

Sum Of The Parts
The guidelines listed below are a starting point in mixing the snare. All of the sounds of the drum kit (and the whole band for that matter) have to be considered. The right sound for the snare for a particular song might be really flat on its own. (I cover this idea further here.)

Here are some mixing ideas based on my experience:

High-Pass Filter (HPF)
A mic like the SM57 has the low-end rolled off. I will roll off a bit more if I notice a positive impact on the sound. I’m not going to roll off more just to then flatten the snare sound. If you’re running an analog board, hit the HPF switch and listen for a difference.

It’s a good idea to remove low-end frequencies from all mics that aren’t focused on a low-end instrument. For instance,  use an HPF on vocal mics. Snare and cymbal mics, which aren’t focused on low-end kit pieces, are another good place for using an HPF.

Gating
I’ve tried gating my snares but have never been happy with the results—at least for a general snare sound. I’ve gated the snare for a song to get a specific sound, but for all-around mixing, I tend to skip it.

Out With The Bad
I’ll sweep my mid-range with a 6 dB cut and find the area of offending frequencies. It’s that area you drop and suddenly you think, “now that sounds much better.” In the case of the frog EQ I mentioned in the beginning, I didn’t find that spot and rather found a huge boost is what was needed. Some days it’s like that.

Sculpt To Fit What You Hear In Your Head
At this point, you should have a sound in your head that you want the snare to match. It’s that internal reference sound. You know what sounds good, you just need to make it a reality. Is there too much snap? Not enough? Is it perfect the way it is? (This is where that snare/mic pairing pays off.) Or does it still need some work?

And here’s where I have to say I’m sorry. I’m sorry I can’t tell you exactly what to boost or cut and where to do it. It all depends on your snare and your mic and your room and your drummer and…eh, you get the point.

That said, here are a few places to start:
—Snap and presence, 3 kHz to 12 kHz. The higher you go, the less presence and more snap
—Body, sub-500 Hz if you need to give it some substance

The Take Away
Know the tone of the instrument, pair it with the right microphone, and then step behind the mixer. Only then can a good snare mix be created.

Chris Huff is a long-time practitioner of church sound and writes at Behind The Mixer, covering topics ranging from audio fundamentals to dealing with musicians – and everything in between.

Chris Huff is a long-time practitioner of church sound and writes at Behind The Mixer, covering topics ranging from audio fundamentals to dealing with musicians – and everything in between.
All Posts
PrevPreviousPoland’s Jordanki Cultural & Congress Centre Adds Allen & Heath
NextJBL By Harman Supports Dutch Tour Of Musical HairNext
Study Hall Top Stories
Explore All Study Hall