Church Sound: Quality Starts With The “Talkers”-The People At The Microphone

How do we help less-than-stellar talkers do better? It starts with practice, and if at all possible, practicing with the system and with the operator

Having been directly involved in the professional side of audio for a long time, I’ve worked with countless church sound systems from just about every perspective: church member; sound operator/mixer; selling and installing design-build systems; and bidding, selling and installing consultant-designed systems.

What I’ve found is that regardless of the quality of a given system, they all share one huge variable: the users. So often, problems can be traced directly to the people using the system, the “talkers” behind the microphones. (Note that we term these individuals “talkers” rather than “speakers” to prevent confusion with the term “loudspeakers.”)

Most users fall into one of three general categories:

1) Talkers of professional caliber. Usually (but not always) this is a pastor or worship leader who has experience with speaking through sound systems, in addition to being open to taking direction from the sound operator and aware of any system deficiencies. These users continuously improve their technique, which in turn improves the sound quality of the system.

2) Talkers who are timid. Usually a layperson that is intimidated (and shows it) in front of an audience. These users mean well and are sincere, and would love to do better. However, they’re nervous – their voices tend to rise and fall, and they move around too much on the platform. Some are so timid that no matter how hard the sound operator tries, the results are disappointing.

3) Talkers who don’t seem to care. They won’t admit not caring, but their actions speak quite loudly for them. And it’s the most frustrating situation for the sound operator.

Note that considerate talkers, those who work hard at their craft and are willing to act as a partner with the sound operator, can help make even a mediocre sound system perform better. As a result, the congregation can hear without fatigue, and they won’t complain. (At least not nearly as much…)

Caring talkers are distinguished by several characteristics. They control the modulation of their voices over a narrow range of loudness, and use words and inflection – rather than volume – to add emphasis. They help the sound operator by doing a soundcheck prior to services. They work diligently at perfecting delivery and staying on the microphone (called “on mic” for short).

This also applies to music vocalists. The good ones also stay on mic, and if holding the mic, use proper technique to minimize things like proximity effect and handling noise. In short, they’re a joy to work with, and in turn, operators should be quick to compliment their behavior to reinforce good practices.

How It Starts
So, how do we help less-than-stellar talkers do better? It starts with practice, and if at all possible, practicing with the system and with the operator. A bit of encouragement can also go a long way. 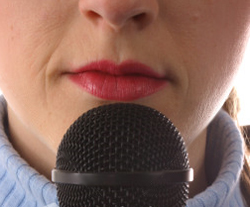 They need to be instructed to speak clearly (but not shout), stay on mic, and don’t rock back and forth or side to side. Whether it’s a matter of reading scripture or giving a missions report or simply testifying, being prepared goes a long way toward being confident.

It also helps to have timid talkers read from a well-prepared script. Even if every word is “read” rather than “said,” and their heads are down for most of a presentation, it’s still better to be heard than to “look good” and have eye contact. The greater risk is always that the majority of the audience is missing most of what is being said.

Again, much of this applies to musical vocalists. Many times, even accomplished singers are intimidated by a mic.