Getting signal from here to there optimally

A direct box, DI unit, DI box, or simply DI is an electronic device that connects a high impedance line level signal that has an unbalanced output (a.k.a., a piece of equipment) to a low impedance mic level balanced input, usually via XLR connector. DIs are frequently used to connect an electric guitar, electronic piano, or electric bass to a mixing console’s microphone input.

The basic component of a DI unit is a step-down transformer. Transformers consist of two or more wires that wind many times around a metal core. The ends of each coil of wire protrude from the windings; one pair of ends is the input, and the other pair is the output. The input coil is called the primary, and the output coil is called the secondary.

When an electrical signal through the primary coil, it creates a magnetic field around the coil. The field then induces an analogous signal in the secondary coil, which appears at the output leads. If the primary has more windings than the secondary, it’s called a step-down transformer because the signal level and impedance are lower at the output than they are at the input.

If the secondary has more windings than the primary, it’s called a step-up transformer because the signal level and impedance are higher at the output. However, the power does not increase with respect to the input. Step-up transformers are used at the input stage of mic preamps and adapters to connect a microphone to a line-level or guitar-amp input.

Passive DI Units
A passive DI typically consists of an audio transformer used as a balun. (A balun is an electrical device that converts between a balanced signal and an unbalanced signal.) Typical turns ratio is about 500:1, to match a nominal 50 kOhms signal source such as the magnetic pickup of an electric guitar to a 100-Ohm input. 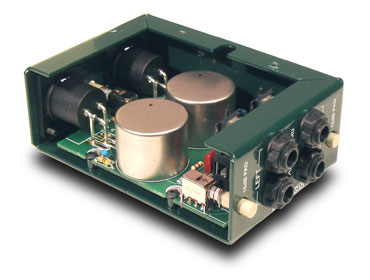 Less commonly, a passive DI may consist of a resistive load, with or without capacitor coupling. Such units are best suited to outputs designed for headphones or loudspeakers.

Cheaper passive DI are more susceptible to hum. Passive units also tend to be less versatile than active. However, batteries are not required, they’re simple to use, and the better units are extremely reliable.

Some models have no settings, while others can have a ground-lift switch (to avoid ground loop problems) and a pad switch (to accommodate different source levels).  Some passive DIs also have a filter switch for coloring the sound.

Chris Huff is a long-time practitioner of church sound and writes at Behind The Mixer, covering topics ranging from audio fundamentals to dealing with musicians – and everything in between.
All Posts
PrevPreviousMartin Professional Releases v3.0 Software For M-Series Lighting Consoles
NextIn The Studio: DIY Building A Simple But Useful Diffusor From Salvaged WoodNext
Study Hall Top Stories
Explore All Study Hall