It's easier than you think -- and makes things much easier

What About Windows?
Sadly, not all of our production gear runs on Mac OS. Sometimes, we need to suffer in Windows.

But all is not lost. Some enterprising young man wrote a little program called RTPMIDI that basically does exactly what the Mac OS MIDI network stack does.

He even copied the dialog box exactly so set up is exactly the same. I loaded this up on the Mini that we use for the Hog and it locked right up to the MBP master.

Easy Connections
Because it uses Bonjour, connecting is usually as easy as waiting for the node to show up in the dialog box and hitting connect. If Bonjour gives you trouble, you can also enter an IP address to connect directly.

Generally, the connections will re-establish themselves after a power cycle, but sometimes they don’t. It’s become part of my normal workflow to go around and make sure everything is connected after we power up all the computers each weekend.

Oddly, the RTPMIDI Windows computer connects the most reliably. I can usually connect the ProPresenter Mac from the MBP, but the FOH Mini fails to connect when I do that way, so I have to go to the Mini itself and connect back to the MBP. I’m not sure why. But once it’s all connected, it works quite well.

What’s Happening?
Once you do all of this (and it actually only takes a couple of minutes to configure and a few seconds to connect everything), what’s going on? Well, basically, any MIDI notes that originate on any computer will be sent over the network to every other node on the network. So I can now send MIDI commands and notes from the SD8 to any computer in the booth. But there is a catch.

I have to try it, but I think MIDIPipe would do this, but I ended running a small, free program called VMPK (Virtual Midi Piano Keyboard). Basically, I tell it to listen to MIDI commands coming in from the FastLane and send out MIDI to the network. It doesn’t do anything else but pass notes through. 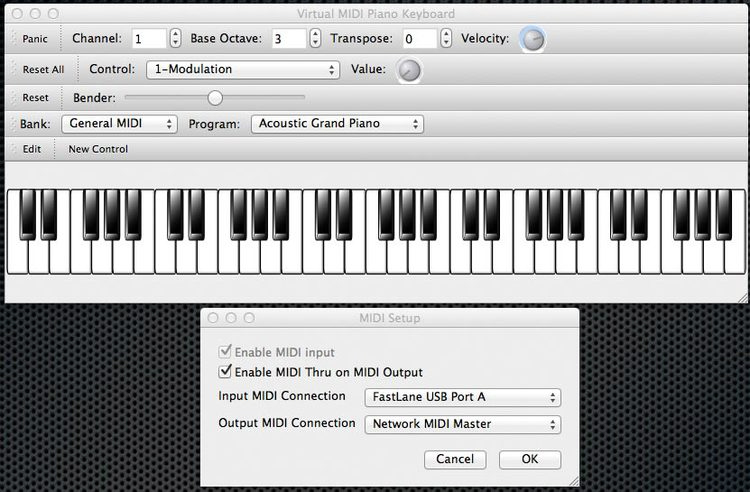 The only thing VMPK does is take notes in from the FastLane and sent them back out to the network. Note that the output name is Network MIDI Master, which is the network session we set up earlier.

I have this set to launch automatically and hide, so we don’t even know it’s running. It just sits there in the background and sends notes along to the network.

It’s Easier Than It Sounds
Yes, it took me over 1,000 words to describe the process, and I spent a few hours getting it all figured out. But now that I’ve done the hard work, it won’t take you more than a few minutes to get it all working.

And once it is, what can you do with it? If you’re like me, your mind is already racing with possibilities. If not, stay tuned for the next post and I’ll tell you what we’re doing with it.