Church Sound: It Takes Three (Due To Silly Decisions)

I could write a book on the subject of sound for churches. Unfortunately, it would have to start with stories about bad sound, and two good friends of mine published this very thing a few years ago.

The book is titled “If Bad Sound Were Fatal, Audio Would Be The Leading Cause Of Death,” by Don and Carolyn Davis, founders of one of the world’s leading audio education organizations, SynAudCon. The book is entertaining and offers a host of true stories, including many of which are historical in nature, taken directly from the lives of these two extraordinary people.

The sad truth is that while bad sound in churches is not literally killing people (thank goodness!), it does put them to sleep. In psychological education, there is the study of what has come to be known as psychoacoustics. It delves into the way the ear works in conjunction with the brain – not only how sounds that enter the ear canal get to the brain, but also, how the brain then processes these (now) electrical signals into meaningful “data” that a person can understand.

An even more detailed study of the science of psychoacoustics reveals how the brain works its way around hearing deficiencies, background noise and other audible annoyances. While the brain is very forgiving of bad sound, enough of it in high doses eventually forces the brain to ignore the input or even shut down. 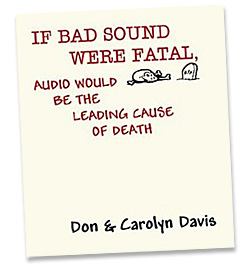 How many times have you heard a pastor or other person speaking say, “I see someone snoozing?” Of course, for the person in the pulpit, this is a truly annoying thing, and it conjures up all sorts of subconscious thoughts: “Am I that boring? Is my message over their heads? What’s wrong with them? I’ve prepared well and am delivering well, but there they go, nodding off again.”

But the cause of sleeping in church (or other public gatherings) doesn’t have much if anything to do with the person speaking. Nor does it mean that many in the audience were out way too late the night before, or that they didn’t drink enough coffee that morning.

Nope—many times the sleeping can be directly attributed to the quality of the sound system being used to amplify the voices. A lousy system triggers an outward portrayal of the confusion that is being caused in the brain by material that is being poorly delivered to the ears of the listeners. When a high enough level of psychoacoustic confusion has been met, the mind simply moves elsewhere, likely to daydreaming or sleep.

Just One Year In
Not so long ago, I attended a Sunday worship service held in a classic church sanctuary, in order to evaluate the room’s sound system at the request of a church member. Within just one year of opening, there were far too many complaints about audio quality to ignore.

Turns out that the building’s architect had recommended a local “not-so-good” (and now out of business) sound contracting firm to work with the facility’s electrical contractor and the church committee to implement the sanctuary sound system. It is what we shall now term “Sound System Number 1.”

Some of you might know where this is going…

This system was compromised from the outset due to the location of a large, beautiful cross, lovingly built by a parishioner. The cross location was deemed unchangeable, and thus, the only saving grace would have been for a quality sound contracting firm to stand firm and argue for a different sound system design to work around the obstacle.