Church Sound: Imaging Is Everything

My "sight brain" was telling me the choir was far left, but my "hearing brain" was forcing my attention toward the stage...

The public image of a church is important, but there’s another kind of image – of the sonic variety – that is also very important.

During a recent worship service, I got to thinking about image in terms of where sounds are coming from on the stage – and where I actually perceive them as coming.

Specifically in this case, there was a choir singing, and it was located far left. In fact, I had to turn my head almost 90 degrees from the main stage to see the choir.

The reinforcement for the choir was coming from loudspeakers flown centrally above the stage, and from where I was sitting, the reinforced sound was louder than the acoustical sound of the choir. Thus my attention was drawn to the stage, which was void of any performing musicians, rather than the choir.

My “sight brain” was telling me the choir was far left, but my “hearing brain” was forcing my attention toward the stage.

This is an imaging issue, and it was driving me nuts. 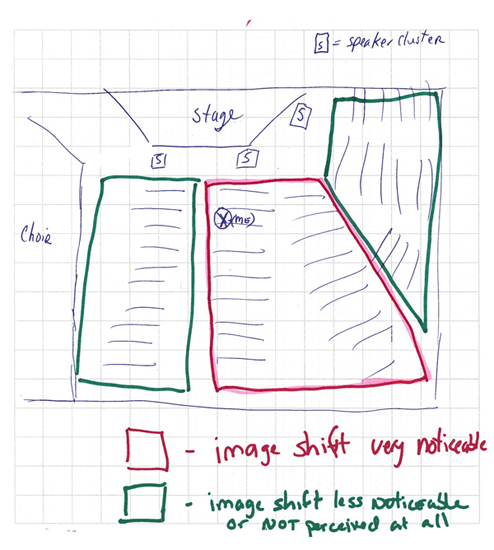 A drawing by the author showing the layout of the church where imaging is problematic. (click to enlarge)

Or if I had been located more toward the right side of the sanctuary, the reinforced sound would have seemed more “in line” with the location of the choir. Even though the reinforced sound would still be louder, it would make sense in the sight-sound-brain equation, because the acoustical image would be more in direct line with the choir. Side note: the room was a small enough that the distance from the choir to the loudspeaker covering the right side of the room was not great enough to cause the listener to perceive much – if any – delay between the acoustical and reinforced sound.

The next time I visit this church, I’m either going to move to my left (closer to the choir) – or to my right, far enough over to align the reinforced sound with the acoustical image. And, to improve this situation, my suggestion to the church is to add a secondary loudspeaker(s) that hangs above the choir that will clear up the imaging problems. The acoustic and amplified sound would be coming from the same direction.

On the other hand…

Fast forward a couple of weeks. I attended a hymn sing/brass concert in a different worship center than above. During one song, five of the brass players went up to the balcony and played from there, echoing the players on the stage.

It sounded incredible! At times it had the feel of a question and answer session, where the stage musicians would play, answered by the musicians in the balcony. Other times they both played together, and if felt as if I was in the middle of an entire brass section. This was excellent imaging.

The reason the imaging worked is because it was set up as an effect. The antiphonal response of the brass in the balcony was a purposeful image shift that enhanced the musical piece.

Read More
So Misunderstood: Clearing Up The Confusion Between Phase & Polarity

One on my pet peeves (I have many) is listening to a band playing over a left/right stereo system, and the toms on the drums are panned to give separation. But when I look at the drums, rather than the sound going from right to left – following the drummer as he runs the toms – it does the opposite. Again, imaging makes a difference.

Another thing that I like to do when I’m mixing in a stereo situation is to try to move the image of the instrument relative to where the musician is standing on the stage. If the guitar player is on the right side of the stage, I will pan the feed of the guitar slightly to the left, and so on.

Andy Coules is a sound engineer and audio educator who has toured the world with a diverse array of acts in a wide range of genres.
All Posts
PrevPreviousShow Map For Expanded 2018 NAMM Show Now Available
NextDefying Gravity…Safely: Approaches And Best Practices In Flying LoudspeakersNext
Study Hall Top Stories
Explore All Study Hall