Taking a closer look at how each of these four mixing systems actually work...

For the novice sound engineer, it can be pretty intimidating to walk up to a large analog or digital console and try to figure out the routing of audio signals.

It wouldn’t be so bad if the only place the sound had to go was to the main loudspeakers in the room. Occasionally that’s the case, but most of the time, we’re also sending different mixes to monitors for musicians; to lobby and cry room speakers; and to various recordings.

Moreover, we have several options for how we can group and control our signals. Let’s define what Auxes, Groups, VCAs and Matrix mixes are, and then in my next article, I’ll talk about when you’d use each of them.

Auxiliary Mixes
Often simply abbreviated as auxes, an auxiliary mix is pretty much what it sounds like; another, alternate mix using the same set of input signals that you are working with in the house mix. Each aux mix will have an individual level control on each channel, as well as a master aux mix level. In this way, aux mixes are very much like the faders; turning up the aux level for channel 1 adds more of whatever is in channel 1 to that aux mix.

What makes aux mixes so cool is that they don’t effect the house mix at all, and you can just as easily lower or eliminate that signal from Aux 2. Thus, each aux mix is another complete mixing layer for your input signals, albeit without individual EQ adjustments for each of those sends.

Most consoles/mixers that we use for live sound will have at least 4, and often 6 auxes. Of course, larger consoles gain more auxes, and it’s not uncommon to see digital consoles with 16, 24 or more aux mixes (many times, in stereo).

Aux sends (the points you send from each channel) can either be pre-fader or post-fader. That simply means that the fader (which controls your house mix) will either have no effect on the aux send (pre-fader) or it will have an effect (post-fader).

In other words, if Aux 1 is pre-fader, you can turn the channel 1 fader down all the way to off, and still have signal coming from the monitor connected to Aux 1. If it’s post-fader, turning down the fader on channel 1 will also turn down the signal in Aux1.

Remember the manual that came with your console? Now’s a good time to check it out if you’re not sure what your console does.

Groups
Groups have somewhat fallen out of favor of late as digital consoles have become more popular. It’s a shame, really, as groups are incredibly useful.

Sometimes called sub-groups, a group is simply a way to collect a bunch of channels together and do something with them. Strictly speaking, the main left and right (L&R) mix is a group (as is a mono or center mix if your console has those).

A sub-group then, is a way to collect some channels for processing on the way to the main group (or not, depending on your needs). 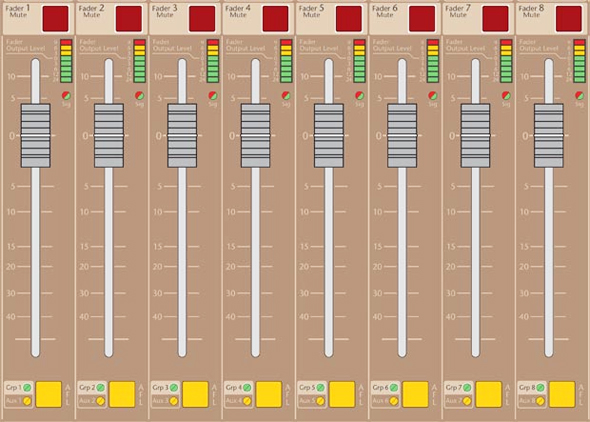 To use a group, you simply assign the channel to the group you want to use. Some consoles will give you say, 4 groups, with three switches on each channel to use for assigning; Group 1-2, Group 3-4 and L&R.

Assigning a channel to Group 1-2 will send that channel’s output to the summing mixers known as Groups 1 & 2. In these consoles, group assignments follow the pan knob. So if you want to assign a channel to just Group 1, you would pan hard left. Panning hard right puts that channel in Group 2 only.

We’ll talk about why you would want to do that in the next post. But for now, just know that you can usually assign the sub-groups to the main mix as well.

Now let’s tackle VCAs, and then most confusing off all, the Matrix (don’t worry—Keanu Reeves will not be making an appearance).

Mike has been involved with church sound and live production for more than 25 years, and is the author of the Church Tech Arts blog. Based in Nashville, he serves as the Maker of Magic for Velocity Pro Systems, which provides design-build production solutions for churches and other facilities.
All Posts
PrevPreviousSpotlight: An Eye On DI
NextA Road Case PrimerNext
Top Stories
Explore All Study Hall