Making it big enough and tech capable while still fitting into the specified footprint...

I’ve spent the last several years looking at church tech booths. I knew, someday, we’d be able to relocate ours from the balcony to the floor. When we did, I wanted to be ready.

The design started about three years ago, according to file creation dates. It’s changed more than a few times over the years, but I’m pretty happy where we’ve landed.

Design Objectives
As you may have gathered from my series on renovations, I’m always starting with a set of design objectives.

In this case, we had several:

—Get front of house to the floor, and keep it in front of the edge of the balcony.

—Bring lighting and ProPresenter to the floor.

—Have a “producer” desk.

—Keep front of house, lighting and ProPresenter in a line at the front of the booth. 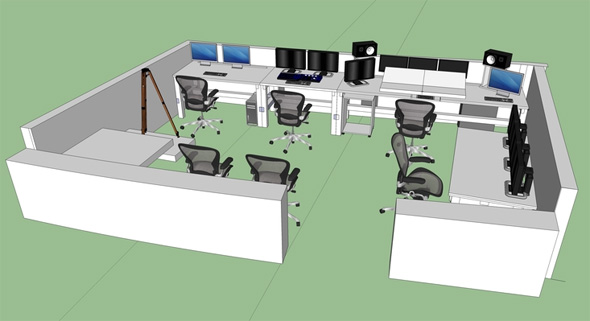 The back wall is existing; we raised the walls of the booth to obscure the monitors, and to provide a little more security. They have since added a short wall extension to the back wall as well.

That’s a pretty good list, and I think we hit it all. Design is all about compromise, and we did have to make some compromises. The booth is probably larger than it needs to be in terms of square footage. At 14 feet deep and 21 feet wide, it’s certainly spacious. The size was dictated by three things.

We would have been fine with 6-feet 6-inches or 7-feet in front of the camera platform, but that would have landed us in the middle of a row of seats. If you have to remove a row, you may as well push the front wall out as far as possible.

Second, the width was based on a section of seating. After playing with a good half-dozen designs, it just didn’t make sense to not go full width. At best, we could have saved 1-2 seats on one end, and they would have been terrible seats no one would have ever used. So again, we went big. No need to go home.

Finally, we really needed to keep the front of house position out in front of the overhanging balcony. My original design was actually one row deeper (!) and had FOH on the left side of the booth, almost in the center of the room.

Leadership felt that was one too many rows, and looking at it now, I have to agree. So we moved FOH to the right of the booth, which is a little more off center than I’d like, but due to the curve of the balcony, we’re still in front of it by a few feet. 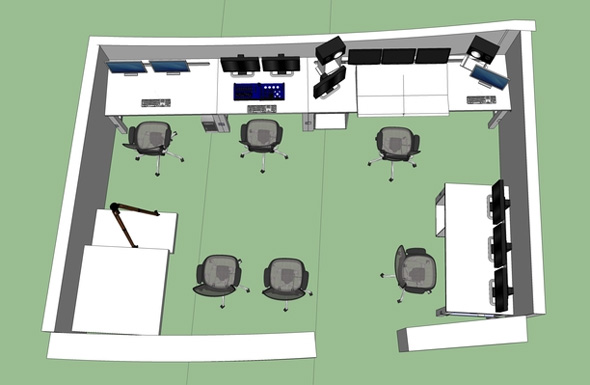 I wanted room for new volunteers to sit and observe without being in the way.
Read More
Latest AVIXA COVID-19 Impact Survey: "Glimmers Of Improvement"
Pages: Page 1, Page 2
1 2Next »