Applying the rules and adapting them to each unique situation...

Understanding microphone polar patterns also comes in handy. This knowledge can be particularly invaluable in churches where the stage volume is relatively high from sources such as a dynamic live band or orchestra close by.

“Directional polar patterns (cardioid, supercardioid, hypercardioid), are designed to capture sound from the direction they are aimed and reject sound from the sides and rear. Using this directionality to your advantage will greatly increase the ratio of desired pick up to undesired,” explains Rick Belt of Electro-Voice Wired Microphones.

Steve Savanyu at Audio-Technica points out another common challenge.

“Having a large loud pipe organ right behind the choir is going to be difficult to isolate since the mics cannot discriminate between the desired sound (choir) and the undesired sound (organ),” he notes, a difficulty that can be tough to fix because both the organ and choir are in fixed positions, unlikely to be able to be moved.

In this case, try using mics with a tighter (supercardioid or hypercardioid) pattern, and aim them sharply downward toward the choir – straight down if necessary. Then on the mixing console, filter out frequencies below 100 Hz.

“Unpredictable situations call for a directional mic with a consistent pattern – you don’t want to find out that your microphone goes from cardioid at 1 kHz to omnidirectional at other frequencies,” says Chris Countryman of Countryman Associates.

The environment is always an important consideration in choir mic’ing, adds Michael Petterson of Shure. “The acoustical conditions of where a choir is will have a direct impact on the choir. You can’t ignore the acoustical environment of where the choir is because it will determine how they sound to each other and therefore how they will perform.

“If you want sound reinforcement levels like those used in rock ‘n’ roll, then you have to use rock ‘n’ roll techniques, which is close mic’ing, and there’s just no way around that.”

Above all else, Petterson concludes by reminding us that how the mics work with a choir in a live situation is based in math and science.

“And if you keep the microphone and the loudspeaker as far apart as possible that also helps your gain before feedback. That’s all fundamental stuff, but all the time in choir mic’ing we want to try and avoid this. But we can’t, because it’s physics.” 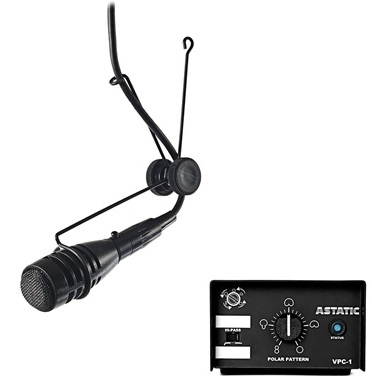 The CAD/Astatic 1600VP, which hit the market many years ago, is a continuously-variable pattern condenser hanging microphone, providing the sound operator with the ability to change the mic’s polar pattern “on the fly” via a remote control. Thus, the polar pattern can be optimized to match specific needs and situations.

The large-diameter, low-noise mic elements of the 1600VP produce a frequency response of 40 Hz to 20 KHz with a selectable pattern. A recessed 80 Hz, 12-dB-per-octave high-pass filter that removes unwanted low-frequency energy when engaged. The filter control is conveniently located on the remote control box.

The 1600VP is designed to hang from ceilings, and a low-profile carbon fiber boom (MB-1) is available for stand mounting.

In addition, the model 1700VP also offers a variable pattern with a 56-inch carbon fiber boom with a clutch rotational system.