The DiGiCo consoles are operated by Dave Bracey at front of house, with Jon Lewis mixing monitors for Cher and Horst Hartmann supplying monitor mixes to the seven-piece band, dancers and technical crew. The D2K tour, Cher’s eighth solo venture, reunites the three engineers, as well as system tech Ulf Oeckl, other crew members and some of the musicians, who all worked together on P!NK’s 140-plus-date The Truth About Love tour, which wrapped in early 2014.

Bracey, who made the transition from DiGiCo’s D5 to the SD7 for Massive Attack’s 2008 European tour, and whose resume includes extensive touring with The Cure, Robbie Williams and Björk, reports that he typically does a lot of programming in the console. With Cher going through nearly a dozen costumes during the 18-song show, the D2K tour features numerous film and video montages while the star is offstage changing.

As Bracey reports, some of the audio for the archival footage is less than pristine: “You have to process it in a way that makes it intelligible in the room,” he says. “So every interlude between every song needs its own snapshot. Some of the archival movie clips have such disparate audio signatures that only some well-adjusted multi-band comp and a channel of dynamic EQ would make the whole segment intelligible. The SD7 offers so much that I am yet to use a plug-in.”

The programmable features of the SD7 are part of the reason that Bracey has used the console exclusively for the past six years. “It’s infinitely controllable, but it never controls you or gets you into a situation where you’re too scared to call up the next snapshot. It makes life easy.” Like the D5 before it, he says, the SD7 allows the operator to update a single snapshot or apply changes across every snapshot, on the fly. “No other desk does it as well—that’s the reason I still use it. I see no reason to mix on any other console,” he says.

With Cher making so many costume changes it makes sense to have one mixer focusing solely on her needs, according to Jon Lewis, who has worked with AC/DC, David Gilmore, Paul McCartney and many others. “DiGiCo is my go-to board,” says Lewis, not least “for the support that you get from the guys, especially initially setting it up.”

The three SD7s are on an optical loop that allows the three engineers to share anything on the network, including video and communications. “That gives us the ability to throw something to each other at the click of a button, as opposed to having to go and find some XLR cables and patch it,” says Lewis. “If Dave suddenly needs her talkback mic, he can get it. If I need Dave’s effects returns, they’re there. It’s very quick and easy. And the ability to send video feeds around the system is great as well.”

“Even simple things like text chatting during the show,” Bracey chimes in. “If there’s something that’s not worth disturbing someone over, you just send them a message and they can answer in their own good time.”

Hartmann, whose credits include Kraftwerk, Scorpions and Sade, generates 12 stereo and 12 mono sends from his SD7. He manages all of the wireless equipment and crew communications while also feeding mixes to the musicians, who are all on in-ear monitors, several of them with separate ButtKicker low frequency effects feeds, and the dancers, via floor wedges and flown side fills.

“Every musician has a talkback mic, every crew member has a talkback mic,” says Hartmann, noting that all of the technicians are either under the stage or off to the sides. “There’s a lot of communication going on.” Since their sightlines are obscured, Hartmann and Lewis are able to follow the on-stage action on their consoles’ video screens.

At front of house, Bracey multitracks the entire show at 96 kHz to a laptop using DiGiGrid MGB coaxial MADI interfaces, both as an archive and as an aid to perfecting his mixes. “Two little boxes, a couple of Ethernet cables into an Ethernet bridge and into the computer—how easy is that? Most days I feel the need to listen back to it,” says Bracey. “It’s always very revealing.” 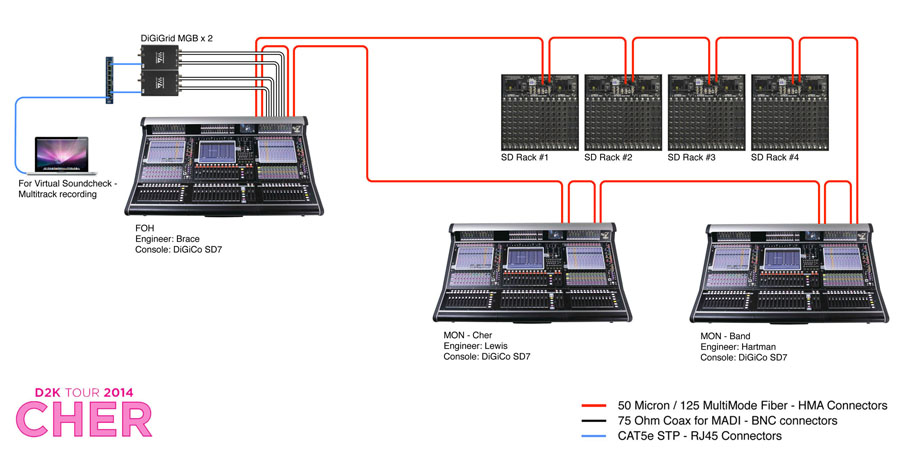