Before launching the show, Dion spent a full day reviewing gear and testing microphones with her audio crew

Celine Dion’s recent return to The Colosseum at Caesar’s Palace Las Vegas has her performing with 31 musicians including a full orchestra and backup band, and she personally selected the Neumann KK 104 S cardioid capsule coupled with a Sennheiser SKM 5200 II handheld transmitter to deliver her vocals.

In addition, an array of Sennheiser and Neumann microphones are used capture the complex performance, which is produced by AEG/Live Concerts West and directed by Ken Ehrlich, noted for his work on the Grammy Awards.

“We were using the A-B-C-D testing methodology,” explains Desjardins, who has been working with Celine for 18 years, and it always came back to the Neumann head. At the end of the day, Celine was convinced she had the best microphone in her hand – a Sennheiser SMK 5200 II transmitter outfitted with the Neumann KK 104 capsule.”

“I think she loves the KK 104 S because it allows her to express herself best,” he continues. “She creates this natural compression with the mic and her voice by pulling away when she pushes more, in order to keep the same dynamic.”

Desjardins says that the KK 104 S is remarkably consistent in its sound, regardless of how the mic is positioned to the singer: “When she sings off-axis, the sound is almost identical to the on-axis sound except that it is of course lower in intensity,” he explains. “A lot of other mics would change tone, and possibly lose all the details when they reach 25 degrees off-axis. The KK 104 S can handle this – it’s one of its greatest characteristics.” 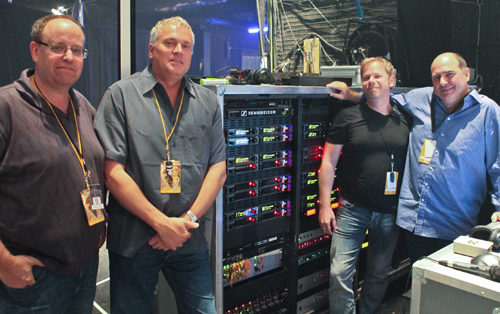 Sennheiser was involved from the outset in helping Dion’s audio staff allocate a wide range of possible microphones for the show. “We have a great relationship with Sennheiser, and they have always been right behind us on everything,” says Desjardins. “For this show they made every effort to source equipment for us – not only microphones, but wireless equipment. This really helped us identify our needs.”

“Sennheiser is pleased to have played a significant role in Celine’s most recent performances at the Colosseum at Caesar’s Palace Las Vegas,” comments Jean Langlais, president of Sennheiser Canada. “Celine is a very discriminating artist who is intimately aware of every aspect of her performances – especially the sound. It is clear that this has been a success not only from the perspective of Celine and the technical teams involved, but also the millions of fans who were lucky enough to attend.”

Drummer Dominique Messier was very involved in researching which microphones sounded best on drums, recording everything on multi-tracks and playing it back in order to determine what worked best. He ultimately chose Sennheiser e 902s for the toms; a Neumann KM 150 for the high-hat; a Neumann KM 184 and MKH 800 TWIN on overheads. “He also put a Neumann TLM 102 on the vintage kick drum we’re using,” explains Desjardins, and it not only delivers the right sound, but also compliments the look.”

Sennheiser MKH 800 TWINs are used on the three conga drums. “We put the 800s in the middle of them, and by using this different pattern, I have to say, I’ve never heard balance like that.” says Desjardins.