Sound Image recently installed a Martin Audio Wavefront Precision system as part of an ongoing AV upgrade at the Cathedral of Faith in San Jose, CA.

Asked about the upgrade, technical director pastor Rick Robinson, says, “The building was built in 1983 by our senior pastor’s father who is very evangelistic with a completely different preaching style from his son, who is a cross between C.S. Lewis and Walt Disney in his presentations.

“About fifteen years ago, we redesigned the sanctuary with a center cluster PA system, but with recent modifications we’ve made on the inside including a new 65 feet wide by 35 feet deep stage and a streamlined modern layout for the 2200-seat sanctuary, the previous sound system just wasn’t working for us anymore, especially in terms of coverage and feedback.”

Robinson continues, “The technology has changed and evolved and the location for the previous system wasn’t ideal. The speaker cluster had feedback issues and required us to mask out certain frequencies. That, plus the look of the PA far back and above the stage was unappealing aesthetically.” 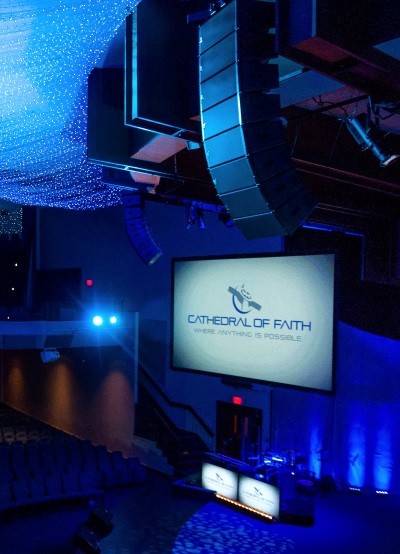 To solve these problems, the Cathedral staff, Sound Image and a team from Martin Audio came up with a comprehensive system including eight flown Wavefront Precision Compact (WPC) cabinets on each side of the stage, two of the original subs flown in the ceiling for the balcony, and four SX218 subwoofers, two side by side per side, under stage extensions beneath the line arrays.

The Martin Audio solution also includes two WPM cabinets per side for balcony fills, six CDD5’s under the front stage thrusters for lip fills and two CDD12’s for under balcony fills.

The system is powered by six Martin Audio iK42 4-channel amps for the arrays and one iK81 eight-channel amp for the subs with two-box resolution to achieve optimum coverage and control, all with Dante capability for more flexible networking.

Commenting on the system, Robinson says, “the main thing we’ve noticed since installing the new Martin Audio WPC system is improved articulation, warmth, audio quality and a much sleeker appearance, all of which represent a dramatic improvement over the previous system.”

Cathedral audio engineer Roberta Starr adds, “the most noticeable difference was the intelligibility and even coverage throughout the space. And articulation is a very big deal because of the message in terms of speech and the music where you want to hear the distinction between different instruments. There was a lack of compromise with Martin Audio because the placement of the original PA cluster was too far above and behind the talent and we had to tweak out certain frequencies from the bottom boxes to avoid feedback and it never sounded as good on the floor as it did in the balcony where we were mixing.

“Now, the live music reproduction sounds wonderful,” Starr continues, “which is also critical because we have a top-notch 9-piece band with horns and four to eight vocalists. Now we get excellent audio quality and all the separation we need between the different instruments and voices with plenty of headroom.”

Robinson concludes, “We also have adult and children’s choirs that range from 60 to 70 people along with Christmas and Easter productions featuring large ensemble casts of over 200 people. We all feel the Martin Audio system is really clear and sounds very good. It has brought us into a whole different level of sound for our sanctuary.

“The feedback from congregants has been very positive, especially in terms of the system’s articulation and warmth and how much better the stage looks without that huge cluster above it. The Martin Audio system has had a very positive impact on our worship services and we’ve set up the church to be successful in the future. Our worship leader wanted a system that was warm and worked well for contemporary worship music services and in that respect, it has definitely met our needs, so we are very happy with it.”