“I've never put that much power in the air with a sound system before.”

Once L-Acoustics was selected as the loudspeaker of choice for the sound system at the Olympic Stadium for the Olympics and Paralympics at London 2012, the collective team faced a huge task.

Exceptional sound was required to electrify a brand-new stadium with a capacity of 80,000 for opening and closing ceremonies of the Olympics and Paralympics as well as for every single athletic event held within the Olympic Stadium over a 29-day period in total.

The amount of kit required to meet these diverse needs was exceptional. Most large-capacity touring gigs do not usually require more than 100 large format line source cabinets, but the Olympic Stadium hosted over double that figure.

Scott Willsallen, audio systems designer at London 2012 Ceremonies Limited (and author of the article directly below), who was responsible for the design and implementation of the technology at the Olympic Stadium, says that, “I’ve never put that much power in the air with a sound system before.” As far as L-Acoustics is aware, no one has ever assembled together so many amplifiers to one network before either.

The total inventory comprised 220 V-DOSC line sources cabinets, plus 51 ARCS II down fill cabs spread out across 22 arrays, suspended from a custom tension ring made especially for the event. An additional two arrays were suspended from the roof with six KUDO in each. On the ground, 88 SB28 subs and 88 KUDO were provided as additional sound reinforcement for the opening and closing ceremonies. 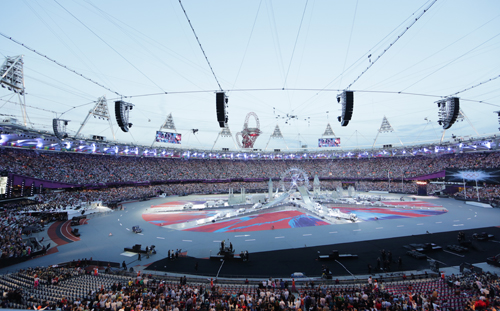 Willsallen, who works with Auditoria Pty Ltd., has design credits including multiple Olympic, Asian and Commonwealth Games Ceremonies since 2003. Here he shares his experiences with at the London 2012 Ceremonies.

I began using groundstacked L-Acoustics KUDO systems at the Melbourne 2006 Commonwealth Games Ceremonies.  Since then I have used them at the Doha 2006 Asian Games Ceremonies, the 2010 Singapore Youth Olympics Games Ceremonies, and the 2011 Rugby World Cup Opening Ceremony in Auckland, New Zealand. The fact that KUDO were predictable, reliable, and produced excellent sound helped to make each event a success. 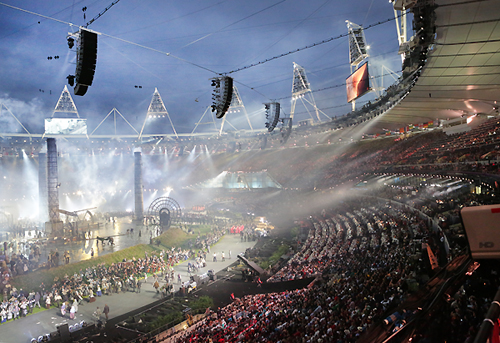 It was clear to Bobby Aitken (Ceremonies sound designer) and I from the outset that London 2012 Olympic Opening and Closing Ceremonies would feature some of the world’s greatest musical talent.  Both Ceremonies relied heavily on the soundtrack to engage the audience and drive the excitement. The design had to exceed the expectations of the musical directors, performers, live audience and the world’s media.

Aside from the planning for the sound systems for the Ceremonies, we also provided sound for all the athletic events held at the Olympic Stadium (this is often considered as a separate project). As Roland Hemming, LOCOG sporting venues Audio manager, points out, “The sports presentation program was much more comprehensive than any previous Olympics. This needed a more enhanced PA system than previous Games to deal with that requirement.”

To create the best sound possible for the games, we had to use a lot of resources, the best companies and equipment and many talented people working together over several months and even years in some cases. We also needed a great sound system with minimal visual impact that could provide the best possible performance for the Ceremonies and the track and field events throughout both games.

What set the London 2012 Olympic Stadium apart, visually and acoustically at least, was the spectacular ring of flown arrays for the upper bowl, suspended above the audience and athletes for almost four months against the elements. For a sound systems designer, the primary area of concern is the geometry of the space to work within. London 2012 offered some special challenges which will be discussed here in further detail.