Going on tour with the QSC TouchMix compact platform for full monitor mixing and more...

Yes, I know. When I first saw TouchMix at NAMM two years ago, I thought it was a toy, but while I was at Summer NAMM’s new TEC Tracks, across the aisle QSC was presenting “the world’s most powerful and portable easy-to-use compact digital mixer” with hourly live performances.

TouchMix is well into its second year and second software revision, so I knew it was stable. Greg Mackie and Peter Watts consulted with QSC to design this unique little mixer, so I knew it was well thought-out. What surprised me was TouchMix’s sound quality.

I’d already begun my summer tour with New Orleans’ most legendary doctor using a different monitor desk and a different set of wedges every day, with wildly varying travel – literally planes, trains and automobiles – so TouchMix seemed like a solution that could provide day-to-day consistency, in a package small enough to be hand carried.

There are two models: TouchMix-16 is bigger, with twice the inputs of the TouchMix-8. The TM16 also has six mono auxiliary sends on XLRs instead of the TM8’s four, and two stereo aux sends for hard-wired in-ear monitors on TRS instead of one. The TM16 has both a stereo cue and a stereo monitor on TRS, as well as an independent XLR talkback input, while the TM8 simply has a cue output.

In addition to all those aux sends, there are four dedicated FX sends with multi-parameter digital effects optimized for live sound, emulating popular L-word (“Lush”) and Y-word (“Dense”) plate, room and hall presets, plus delay and micro-pitch shift.

Both models employ 32-bit floating point processing, with 44.1 or 48 kHz sampling. Specs include a S/N ratio of 95 dB, dynamic range of 105 dB and latency of 1.6 milliseconds, comparing favorably not only to budget digital consoles, but to many midrange professional touring products as well.

Each input XLR has its own analog gain “trim” pre-amp control – two rows of eight trim knobs below two rows of eight XLRs. There’s up to 45 dB of gain in the full clockwise position. I disliked them at first, as they can be bumped and are obviously non-recallable.

However, unlike most other consoles, TouchMix has no faders or encoders except for its single Master Encoder, making dedicated gain controls necessary. The seven Shure BETA 57 and 58 vocal mics sit nicely at “12 o’clock” while SM58s might be at “2 o’clock.”

The tour’s file-based front of house engineer Andy Loy uses a 32-channel input list that fits a wide variety of digital consoles, so it seemed like the TouchMix-16 might not be big enough. However, only 16 channels are needed in the wedges.

Obviously all seven vocal mics are needed. In addition to the trombone’s wireless BETA 98 and the effects pedals fed from its UHF-R receiver, we mic two guitar amps, use the XLR output from Roland Guerin’s Aguilar DB 751 bass head, a Nord keyboard’s JDI, and a Barcus-Berry CS-4000 piano pickup that’s used with a Countryman Type 10 DI. That makes 14.

Herlin Riley’s Mapex drum kit uses a total of 13 mics, an input list that would satisfy most festivals. However, the majority of bands I’ve worked with need no more than kick and hi-hat in their floor monitors. While some musicians ask for snare drum in their wedge, most get more than enough snare from the hi-hat mic, which is always needed (Figure 1). 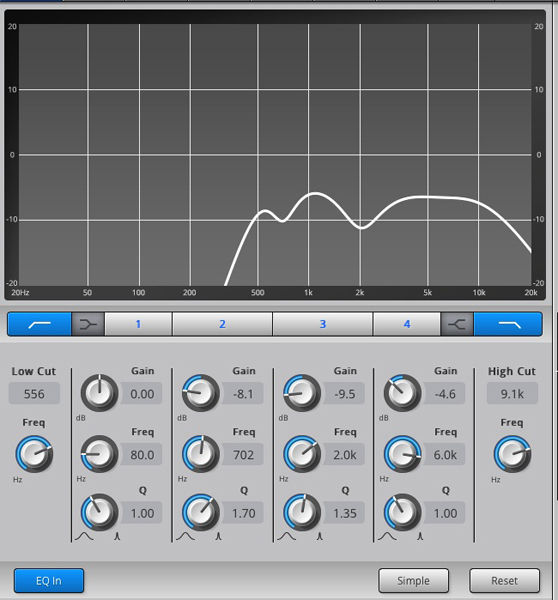 The Shure KSM137, like the KM184, is particularly smooth and accurate, and when placed a half-foot above the hi-hat cymbals, is shadowed from the snare drum enough to balance against it, but also gets enough toms to sound natural when combined with a dynamic kick drum mic, for a total of two more monitor inputs.

By varying the hi-hat mic’s height, high-pass filter and EQ, a variety of drum sounds can be supplied, from lots of hi-hat to an even blend of hat, snare and toms. Without the pounding of snare drum mics in monitor mixes, everyone can monitor at lower levels, helping conserve hearing, though it’s not for everyone. Check it out.