In the world of live sound, certain topics are guaranteed to draw fellow engineers into a multi-hour discussion that ends in no agreement and a hefty bar tab. Drum miking is at (or near) the top of the list.

Further, every situation is different. Sometimes it’s best to just go with a pair of overheads and a kick mic, while at the other end of the spectrum, sometimes the situation calls for individual spot mics for all 48 inputs on the drum riser.

Complicating the picture even more are important aspects in addition to actual mic selection and placement. Sure, that’s got to be “right” but it has to be combined with aspects such as processing and the overall scope of the mix.

With that in mind, here’s a walk-through of my general workflow for attaining quality drum sound, appropriate for the style of music (and reinforcing appropriately for the space).

Kick Mics
Other than buried and unintelligible vocals, I can’t think of a bigger source of eye-rolling among engineers than lousy and/or inappropriate kick drum sound. This can range from a 110 dB reproduction of a basketball hitting a gym floor with no true low-end characteristics to a super-hot signature that overwhelms the entire low end. Where to start?

First, let’s think about aesthetics. Most pop, rock, and R&B music benefits from a kick sound that’s somewhere in the sweet spot between the previously mentioned tonal atrocities; a nice, solid, controlled low end with appreciable attack on the high end. A great way to attain it is with a dual-mic approach; a mic inside the drum to capture the attack of the beater hitting the head and another mic located outside to fill out the low end punch.

Inside is typically handled with a boundary-type mic with high SPL capability and a relatively full frequency response (at least 20 Hz extension on the low end and above 10 kHz on the high end). The Shure BETA 91A and Sennheiser E901 are two common models for this purpose. Some engineers favor the signature of the vintage Shure SM91 in comparison to the newer models due to its different capsule and preamp.

Outside, the choice is usually a dynamic mic designed for low-frequency extension. There are a lot of options and several variables, such as the drum itself, tuning, and aesthetics. Most commonly I see the Sennheiser E902 (or the lower cost E602), Shure BETA 52A, and Audix D6. All can provide a tight, punchy low end with nice high end extension, and if need be, can stand on their own without an inside mic. 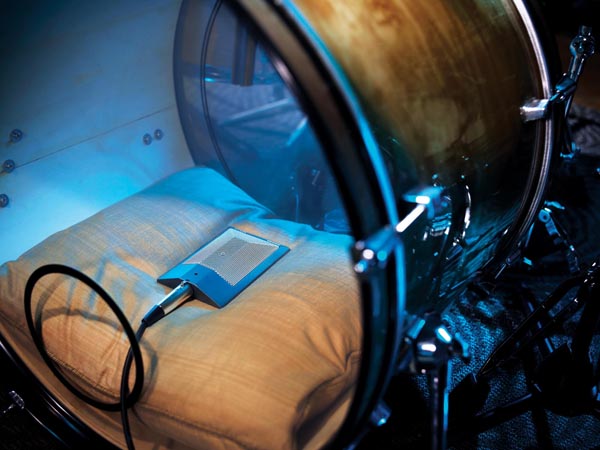 Shure BETA 91A inside a kick drum.

Other popular options in this regard include “old school” designs such as the Electro-Voice RE-20 and Sennheiser MD421. Another option is the Audio-Technica AE2500 dual-element mic with both cardioid condenser and dynamic capsules. The dynamic element helps delivers the aggressive attack of the beater while the condenser captures tonality of the shell.

I’m also a big fan of the Heil Sound PR40 (and the kick-specific version, the PR48), a large-diaphragm mic that shows exceptional LF response. (In fact, I’ve used PR40s to record space shuttle launches several times with plenty of headroom to spare).

Kick Workflow
My general approach with kick starts with the inside mic. I bring it up in the mix, gain it (or pad it) appropriately, and start by gating the channel. (Very rarely do I come across any drum that’s tuned well enough to get by without using a gate.) Next, a high-pass filter is applied around 85 Hz, since the punch will come from the outside mic, and this is followed by a deep cut in the 200 to 250 Hz range to clear up any “boxiness.”

I also generally find that a couple of cuts in the 800 Hz to 1 kHz range helps keep the key vocal areas of the mix from being cluttered by the kick’s punch, and if necessary, a spike at around 4 kHz can add attack if there’s not enough of the beater.