This note describes how I try to solve these problems in my designs.

Requirements
Here’s what I think is an appropriate performance specification for a first-class concert woofer:

This spec is for ordinary rock and popular music touring applications. For heavy techno and hip-hop, the lower frequency limit should be reduced to 35 or even 30 Hz.

Distortion
You’ll notice that the spec gives quite low distortion values. We need ultra low distortion bass to avoid spraying ugly harmonics over the whole lower half of the spectrum, from 1 kHz down. High-distortion woofers mask and color the sound well into the midrange. For most applications, that’s not helpful. For the full rant on this topic, see Good Bass.

Maximum Acoustic Output
In the table above, I rate maximum acoustic output in acoustic watts rather than the way loudspeaker output is usually rated, as dB sound pressure level at a distance of 1 meter.  The reason I use acoustic watts is that when you’re talking about large arrays of woofers sending bass all over the room, the idea of SPL at 1 meter doesn’t seem too helpful. This is especially true since the directionality of the bass arrays is strongly dependent on box arrangement and delay settings.

Maximum acoustic power output as a function of frequency is sometimes referred to as Power Bandwidth. It describes the total amount of bass energy the woofer puts out into the room, without without regard for coverage pattern. 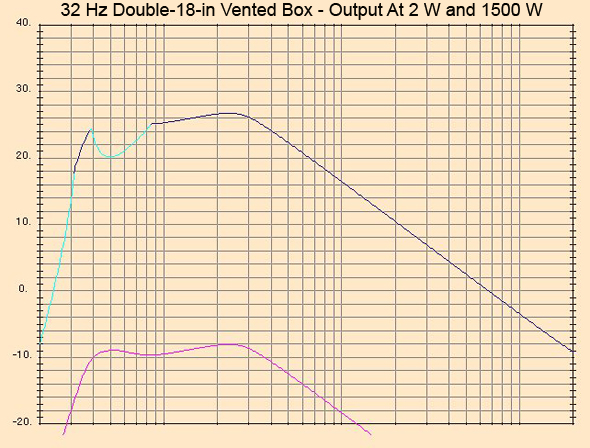 The two curves show output at 1 watt and 750 watts per speaker. 20 Hz is at the left-hand edge of the graph. The left-hand axis is acoustic power output in dB above (or below) 1 acoustic watt. 0 dB is 1 acoustic watt. The blue-green parts of the upper curve indicate regions in which the loudspeaker’s output is limited by maximum cone travel.

This box has been designed for good performance at low levels, but not for good power bandwidth. The port is tuned to 35 Hz, which gives nice low bass extension. However, when things get loud, the port can’t help the woofer enough at 50 and 60 Hz. The cone moves too far, output drops, and distortion rises – a lot.

What would this woofer sound like? It would sound nice and warm and bottom-y at low levels. At high levels, though, it would sound like a big, unmusical air-blast generator. It would create lots of wooly distortion that gave some illusion of bass, but masked all the lower midrange detail of the program. In a typical stacked array, it would squirt a narrow beam of distortion forward, producing an unnatural, “bonky” sound for listeners in front of the stack. I would call it a whuffer or maybe a whonker or whacker, but definitely not a woofer. 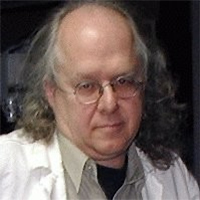