Microphone selection and techniques for a range of acoustic instruments.

Acoustic performances, and the instruments themselves, usually need to be handled differently than the electronic side of things.

Thumping kick drums, compressed bass guitars and the like are not the norm for performances intended to be more musically subtle.

A more natural sound is desired and it starts with microphone choice and deployment.

Fortunately, most instruments can be picked up quite nicely with just three types of mics that most sound folks already have in their inventories.

A mic locker made up of small-diaphragm condensers, standard dynamics, and a few large diaphragm dynamics can get the job done in most cases, combined with appropriate techniques.

Here are some approaches that have proven to work well in my work with acoustic performances over the years.

Acoustic Guitar
While many modern acoustic guitars have built-in pickups that sound quite good, some performers prefer older models without them (or they simply don’t like to use pickups). This entire article could be devoted to the different ways of capturing acoustic guitars, but here are two of my favorites.

First, employ a small-diaphragm condenser like a Shure SM81, placed about 8 inches away from the guitar and pointed between the sound hole and the neck. This location captures an accurate overall representation of the instrument.

Second, change to a large-diaphragm condenser like an AKG C414, and set it to a cardioid pattern with the same positioning. To my ear, at least, the larger diaphragm sounds better, but the downside is that it’s more bulky.

Banjo
As the old joke goes, “What’s the definition of perfect pitch? When the banjo lands squarely on the accordion after you toss it in the dumpster.” (Sorry, couldn’t resist.) And actually, I like the sound of banjo. Several clip-on mic systems capture the instrument well, but since I don’t own any, instead I opt for a dynamic instrument mic. Recently I pointed a CAD D89 at the head, just below the bridge, and it worked quite nicely. I’ve also attained good results with condensers as well

Dobro
For the unfamiliar, dobro is a generic term for a resonator guitar played with a slide. The strings pass over the bridge, which is attached to one or more resonator cones, producing a distinctly metallic sounding guitar tone. There’s no center sound hole, and the mic needs to be pointed at the resonator for best effect. An Audix D2 dynamic sounds very natural for this application, in my experience.

Accordion
A good accordion player is magical to me, an important part of music like Zydeco and traditional folk. Accordions come is three basic sizes that I refer to as Button, Cajon and Full. Button is the smallest, utilizing buttons instead of piano keys. There are still reeds on both sides. Cajon units are “medium” in scale, with piano keys as well as buttons on the other side. Full, of course, is the largest, with piano keys on one side and bass/chord buttons on the other.

There are some great clip-on systems for Full accordions, like the DPA d:vote stereo kit. My company’s inventory doesn’t have accordion mounts so we opt for a stand-mounted large-diaphragm cardioid dynamics like the Electro-Voice RE20 or RE320. Use two mics, one pointed at the reed opening on each side of the instrument. For Button and Cajon, a single cardioid mic placed far enough away to pick up the reeds on both sides can do the trick in capturing a full, honest sound. 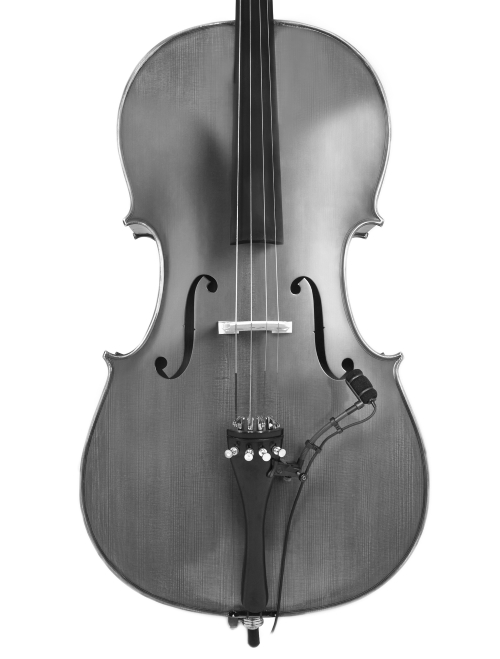 An Audio-Technica ATM350U cardioid condenser with clip-on mount and gooseneck on a violin/fiddle.

Violin/Fiddle
If possible, I prefer to clamp a small condenser right on the instrument. In addition, Audio-Technica, DPA, and others offer high-quality small mics on goosenecks with clamps. If clamping isn’t feasible, try setting up a boom stand with a small-diaphragm condenser about a foot away from the instrument, pointing forward of the bridge. Just make sure the mic and stand aren’t in the way of the bow.

Violas, cellos, and upright basses (discussed next) are also in the string family, and in smaller ensembles, place a mic on each one. If the performers are playing in a section and individual mics can’t be used, place mics on the section leaders (called first chairs in an orchestra) and then deploy area miking for the sections with small condensers, preferably at a one mic/two player ratio. The mics should be about 4 to 5 feet above the seated performers, and raising the stands up a little higher allows pick-up of three performers (if you’re short of mics or channels).

A quick note before moving on: Acoustic orchestras are actually relatively easy to capture, but the trick is getting the right balance. Provided that the audience is in the “sweet spot” of a stereo PA, pan out the instruments in relation to where they’re positioned on stage to give the mix some room. The conductor sets the balance and volume of each section. The PA should just reinforce the orchestra in the venue.

Craig has worked in a wide range of roles in professional audio for more than 30 years in a dynamic career that encompasses touring, theater, live televised broadcast events and even concerts at the White House. Currently he owns and operates Tech Works, a regional production company that focuses on corporate events based in Reno.
All Posts
PrevPreviousModern Mix Extravaganza
NextDrums In Church Sound: Rhythmic Blessing Or Holy Terror?Next
Top Stories
Explore All Study Hall