Bringing Out The Hard Edges

The sonic directions of ska/punk rockers Less Than Jake on tour.

Matt Yonker was enjoying a bit of downtime on the current North America tour by Less Than Jake when we caught up with him at his Nashville base, where he also runs Drastic Sounds Studio.

The popular ska/punk band, originally from Florida, formed in 1992 and is still going strong in its 25th anniversary while Yonker marks his 15th year on the production team.

He’s been involved with the Nashville punk scene since moving to the city in 1996, first as the drummer for a band called Teen Idols that enjoyed commercial success.

His association with Less Than Jake began when Teen Idols was invited to join the band’s 2001 tour, and as things progressed, he offered to serve as the headliner’s drum tech. That offer was eventually accepted, and since then he’s handled several roles in a working relationship that he explains has “just kind of evolved and worked out over time.” 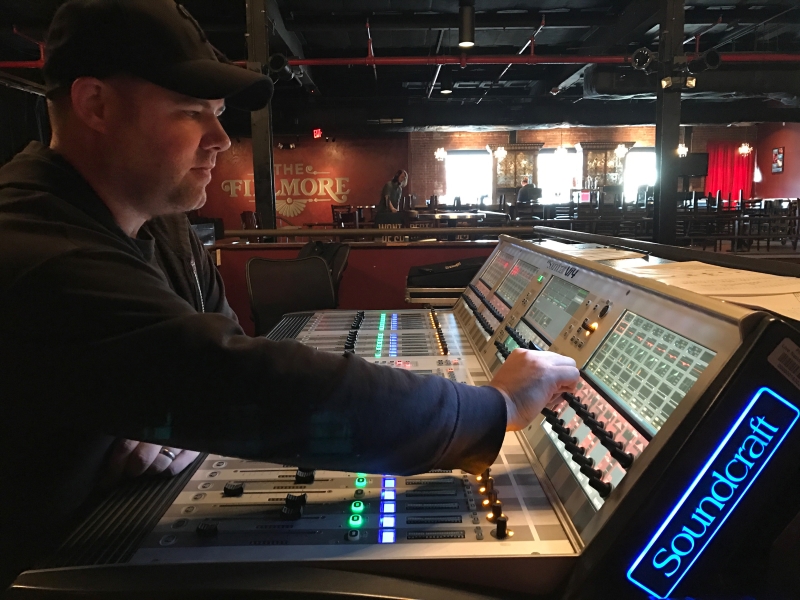 Engineer Matt Yonker at a Soundcraft Vi4 prior to a show at The Fillmore in Charlotte, NC.

“Less Than Jake is a band that melds several styles,” Yonker notes. “There are plenty of fast, aggressive songs, but then they can also lay back on more melodic pieces. Plus they have a horn section, so there’s a lot a varied sounds to work with.”

Admittedly partial to punk rock, its “in your face” nature fits well in his sonic aesthetic.

“The band is loud with a lot of hard edges; guitar, kick and snare drum really have to be out front, and that’s what I go for,” he says. “These are the things I make most prominent in the mix, with everything else filling in nicely. Vocals are a little bit out front as well, but it’s really the guitar-driven punk rock sound that the audience wants.”

It all starts with capturing what’s happening on stage, a particularly keen focus that’s lead him to a range of microphones from Audix. (Most are dynamic types, joined by a few select condensers.) In fact, he notes that the company’s mics are utilized almost exclusively on the entire backline. His work with these tools began long ago with the drum kit. 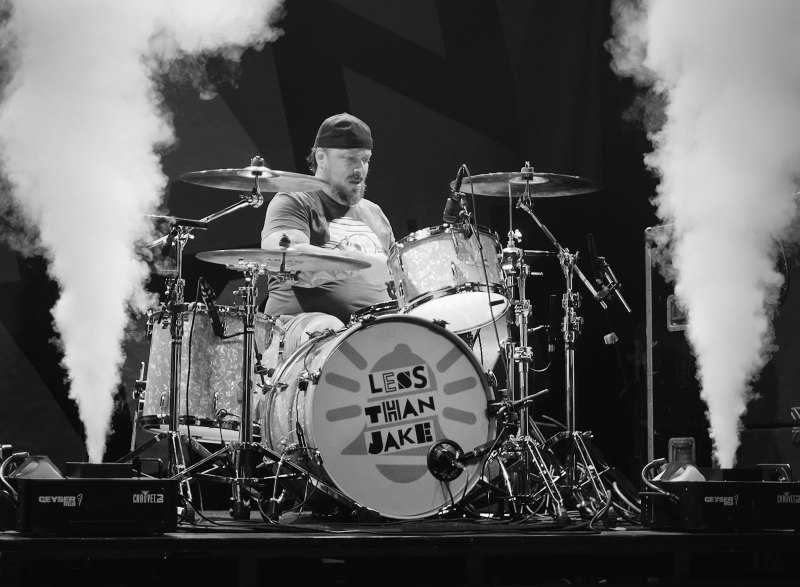 An Audix D6 cardioid handles kick drum, positioned at about the halfway point inside the hole. A pair of i5 cardioids reside at top and bottom snare, there’s a D2 hypercardioid on rack tom, and then floor tom varies between either a D4 hypercardioid or a D6. (The D4 has stated response down to 40 Hz while it’s 30 Hz for the D6.)

“The choice between the two mics just depends on how much low end I want to capture from the floor tom,” Yonker explains. “It really depends on the room. I’ve found that in bigger rooms – and it’s not exactly clear as to why – the tom is a little fuller on the bottom end, so that’s when the choice is the D6.”

He adds that overhead miking doesn’t really provide what he’s seeking from cymbals, so instead he chooses to mic them underhead with ADX51 cardioid condensers. “With overheads, you’re generally trying to capture the stereo image of the kit, but with this band, a more focused cymbal, that specific sound, better fits the music,” he says.

Guitar amplifier is handled with the pairing of an i5 and a CX212B large-diaphragm condenser or ADX51 that Yonker blends in his mix. They’re stand-mounted in front of the cabinet, almost touching the grille, positioned very close together and slightly off-axis of one of the speakers.

“It’s almost like they’re rubber-banded together because they’re so close,” he adds. “I know some engineers like to mic different amp speakers, but I don’t because it helps eliminate phasing issues that can come up.” 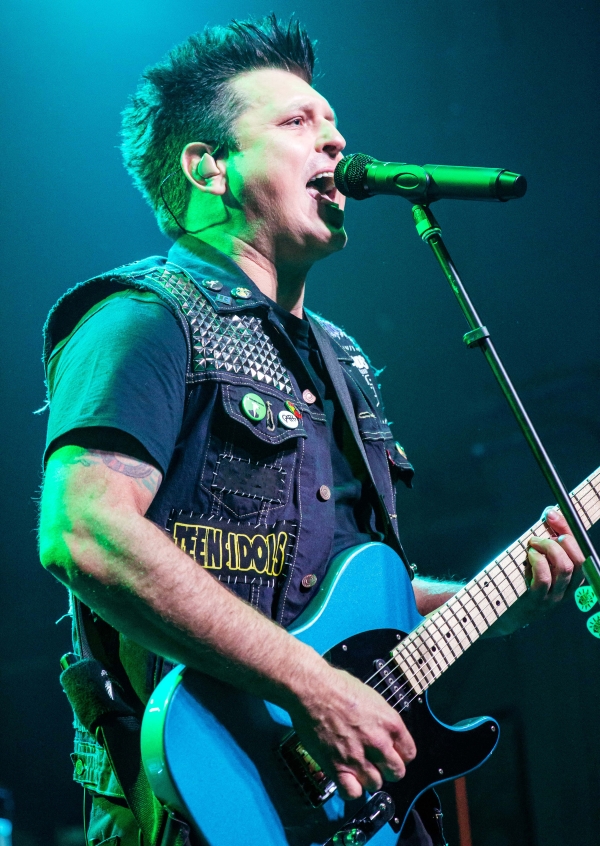 Bass amp is captured with another D6, also stand-mounted in front of the cabinet, and he also takes a direct feed via a Rupert Neve RNDI active DI box. As with guitar, the two signals are then blended together appropriately in the mix.

An Audix OM7 works optimally with the vocals of Roger Lima, while Chris DeMakes is outfitted with an OM5 capsule on the H60 handheld transmitter of a new Audix 60 Series UHF diversity wireless system.

“Each mic matches the signature of its vocalist very well,” Yonker says. “We’ve also found that the OM7, especially at smaller clubs with smaller stages, really helps in terms of additional rejection of the noise going on around it in a relatively tight space.”

Saxophone and trombone contribute to the unique musical style of Less Than Jake, and both players are delighted since switching to Audix ADX20i miniature condenser mics that are simply clipped on the bell of each instrument. They too are working with Series 60 wireless systems – both musicians wear bodypack transmitters.

“Up until a couple of years ago, they were confined to stand-mounted dynamic mics, so they love having the ability to move around freely,” he notes. “For me, the great part is consistency. When someone with a horn steps up to a mic, it’s always going to sound a little different – a bit higher, a bit lower – so affixing the mic in place delivers much-welcome consistency.” 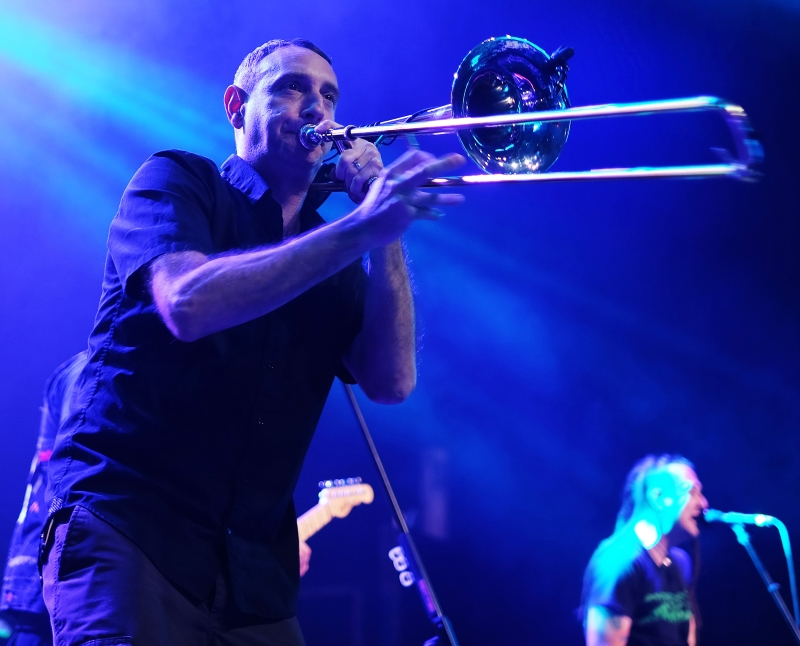 Yonker doesn’t usually carry a console, content to utilize whatever is available at each venue. He likes the variety, noting that is keeps him on his toes while also providing the opportunity to learn about a lot of different boards. Meanwhile, monitors are usually mixed by the venue’s house engineer.

The band’s choice on stage has long been wedges, but that may be changing. DeMakes recently switched to in-ear monitors and is quite pleased with the result being delivered by the Sennheiser G3 IEM system and JH Audio earpieces.

“I have a feeling that it will sway the rest of the group to go that way, and once that happens, everything changes,” Yonker says. “Maybe they should have switched over to IEM earlier, but they’re veterans and liked the way it was working, so there wasn’t anything compelling a change.

“One thing’s for sure,” he concludes. “This band has been around a long time but they just don’t slow down, so it’s always interesting. What we’re doing with the sound works very well with that. The approach is relatively bare bones, but the result is really a great fit.”