Honoring the intentions of composer Leonard Bernstein, the artistic director of the Brevard Music Center Summer Music Festival, Keith Lockhart, set out to capture the pioneering spirit of a classic performance in a contemporary environment. Composed for the 1971 inauguration of the Kennedy Center, Bernstein’s “Mass” created an entirely new kind of liturgy in both its content and technology – using quadraphonic sound.

“Keith is a renowned conductor, not least as principal conductor of the Boston Pops. He had performed the Bernstein ‘Mass’ once before and wanted the audience to have that quad sound experience as Bernstein had originally intended,” explained sound engineer Brady Hislop of Iris Design.

“That’s all very well but the Whittington-Pfohl Auditorium is a semi-outdoor space not designed for amplified music. Roofed to provide shelter from the elements, it is open sided with eighteen hundred seats in three rectangular areas facing to stage, with further seating out in the open air on the lawns to the sides. There is aback wall with a resonator which helps a little, and they have invested in a performance shell for the stage which has made a positive improvement. As well as the issue of quad sound, what was really wanted was the sort of optimum acoustic properties for classical music found in contemporary concert halls. That’s why we elected to use Soundscape, the new tool from d&b audiotechnik.”

Iris Design is a partnership between Hislop and Bobby Bradley; Hislop has a theater degree from Earlham College, Bradley’s expertise is in video. Forged in 2006 with roots in New York City where the two met, they worked many projects together in the realms of live music, theater, and broadcast. The relationship with the Brevard Music Center Summer Festival began at that time; later, Iris Design relocated to North Carolina and they were promptly appointed house vendor. “We started out with a used pair of d&b Q7s, four MAX monitors, a couple of new D6s, some E3s and Q-SUBs. We’ve been using and investing into d&b systems ever since. 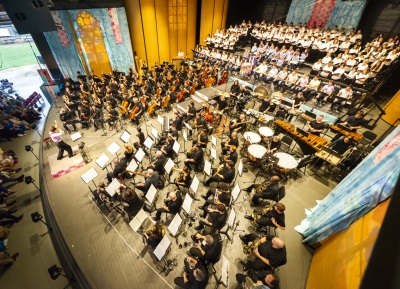 “One thing to understand, the season was already underway when Keith asked about a quad type experience. This was obviously important to his artistic vision for the piece, so I called the guys at d&b’s US head office in Asheville. I knew a lot about Soundscape already, and to some degree had experience, certainly of moving sounds around for placement in musical theater; but Soundscape is current state of the art and promised a more consistent experience for the audience which is what I wanted and is exactly what it delivered.”

With support from Nick Malgieri of the d&b Education and Application Support (EAS) department, Hislop determined a full 360-degree Soundscape implementation; a frontline of seven equally spaced Y10P hung directly beneath the stage truss at approximately 20 feet with a V-SUB to each side; E6 for front fill; and E8s deployed around the sides and back. “We also used a pair of V10P (one on each side) to cover the lawn areas and used the mono downmix function in the d&b DS100 as the source. The lawn area is not too big and holds 400 people total (200 per side); the V10P with their horn loaded mid-range did a great job covering the area.”

Bernstein’s intended form of “Mass” is quasi-theatrical in performance and features three choirs: formal, boys, and street singers. As well as an orchestra, it sees a marching band and rock band take part. Lead voices move physically about stage within the narrative, while a significant flute solo is moved around the listening environment; one of several poignant emotional highlights.

“The show starts with two singers almost shouting at each other, figuratively across the audience – we were able to create exactly that experience.We used the En-Scene function of Soundscape and adjusted different groups of mics, so inputs run through via console to R1 then the DS100 engine. The show moves very quickly through jazz, to rock, and choral, so we also used some room emulation signatures (En-Space) when the music source required it. Some needed a touch of reverb, elsewhere we needed something very clean to leave the voices distinct and discernible. With that ability we were able to make it all of a piece, even the pre-recorded stuff just blended right in.”

Readers might be interested to learn that Hislop had access to the original tracks recorded at the “Mass” world premiere and used them for this performance. Considering the performance schedule and the high profile nature of the Brevard Music Center Summer Festival, Hislop’s decision to use this new d&b software platform was nothing if not audacious.

“We loaded in the extra loudspeakers and amplification overnight on Tuesday and had 90 minutes the following morning to tidy up and ping the loudspeakers and make sure all was working as it should. Then there was a full program of rehearsals and performances for the next four days of other planned concerts.

“We had six rehearsals in all. We had mics for the three choir elements, the principal singers were on cardioid mics, and within En-Scene we were easily able to drag them around the sound environment as they moved around the stage – so what the audience heard always matched to where they were. We also put mics into parts of the orchestra, not to amplify what they were playing but to be able to place them authentically within the ‘spatial environment’; to make it all sound and be more natural in the listening experience. For the audience they would never have known, the experience is so natural.Yes, they’d recognize the solo voices were amplified to get above the orchestra, but the orchestra itself sounded completely live – so it all became one big environment.

“Support from d&b was invaluable, particularly Nick Malgieri, he was helping move stuff in En-Space as I was engaging with the show. This was a big performance, approximately 250 people on stage: 125 in the adult choir, 25 in the children’s choir, 18 individual roaming singers on headset mics, and an 80-piece orchestra – so we ran a big Dante network with a lot of wireless mics going through it.Although I’d never used Soundscape before I had discussed it many times with Ryan Hargis (another member of the d&b EAS team) and recognized it would be a good fit for what Keith wanted to achieve. Being able to position sound is not a new concept, but to be able to do it in such a seamless way – that’s the magic. Quite simply, it works from both a technical and artistic perspective.”