Devising a system serving the space as a complete unit, or in three separate, divisible modes

The ballroom can accommodate up to 2,800 people, with Bond Communications devising a system serving the space as a complete unit, or in three separate, divisible modes, with simple control and operation.

The system also had to be sufficiently flexible to deliver high spec intelligibility across the frequency spectrum for presentations but also be capable of concert style reinforcement from a conventional left/right stage system, when the venue hosts live entertainment.

“It was decided to use line array loudspeakers for the main front-of-house system as these have more ‘throw’ than a conventional loudspeaker and the dispersion pattern is very predictable thus offering more control over the large coverage area,” explains Child.

Normally, to cover a distance such as the length of the ballroom, a long line array, accurately articulated and flown, would suffice and delays would not be needed. However, with the relatively low ceiling height, a different approach was required.

A shorter, five-box array of W8LC’s each side, has been supported at the bottom of the hang by a single W8LCD Downfill box to maintain clarity, impact and fidelity; the addition of four delay points, comprising time-aligned W8LCDs, evenly distribute the sound further down the room.

Used only as required (rather than part of a permanent install), this delay system maintains the tonality and dynamics of the system.

Although mounted discreetly behind an acoustically transparent cloth the W8LC would generally function more than adequately as a full-range system. However, also incorporated into the design are eight WS218X dual 18-inch subwoofers (four per side) providing low-end extension that can be used as required. 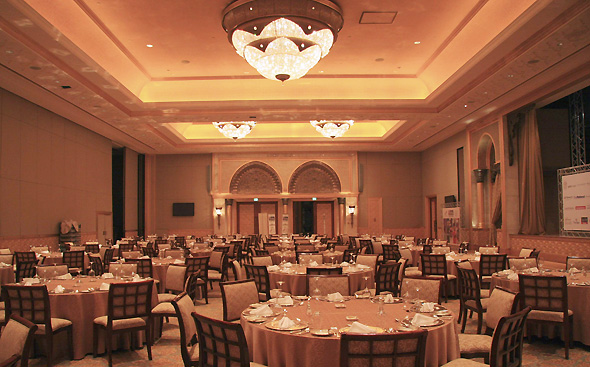