Part of the GES Group since 2014, Blitz full service event production company in the UK has undergone rapid expansion, especially on the audio side. A relatively new recruit is Aron Ross, Blitz’s softly-spoken Kiwi sound and theatre director, whose pedigree has been forged with Clair UK and most recently with 8th Day Sound. Part of his mission at Blitz has been to modernize the audio inventory – yes, this means he got to spend a significant chunk of change and, by all accounts, has thoroughly enjoyed doing it.

He and his team have also delivered a new EM Acoustics system into the ICC Auditorium at ExCeL London as part of the on-going partnership with the venue, which is just one of several major UK venues including London Olympia, the NEC in Birmingham, and The Brewery in London, for which Blitz is the sole on-site supplier. The ICC Auditorium is now host to an audio system based on EM’s two recent releases, the HALO-A large format and HALO-B medium format line arrays, plus some EMS Series in-fill and out-fill boxes and DQ20 amplifiers. 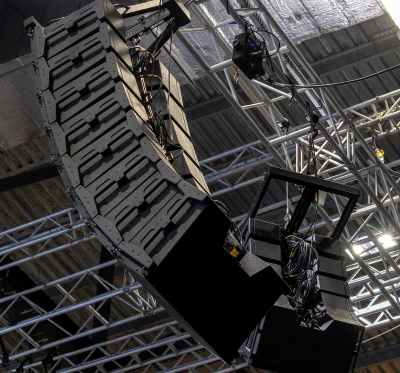 Along with the whole lot of rental stock destined for the Blitz base in Elstree, the investment constitutes EM Acoustics’ largest single order to date, and is also the first joint HALO-A and HALO-B installation in the UK.

“I suppose it’s quite bold when you think about it,” says Ross, “although I don’t necessarily see it that way. It just makes perfect sense to me, both for our rental inventory as well as at ICC. Personally, I’m very proud that ICC is a first, even if it’s slightly more difficult to sell to some customers (they do like a bit of a track record), but I know that once they’ve heard the system, all of their apprehensions will just go away. The same is true on the rental side.”

Decisions of this nature usually boil down to a combination of two factors – price and performance – and the weightings vary depending on the situation. Is that the case for Blitz? “Of course,” says Ross. “We are both a rental company and an AV full service provider, and we look carefully at ROI. However, it’s a balancing act – if no one wants the service or system we’re providing, price is immaterial. Likewise, if we can’t make any money on the system that everyone says they  want because it costs too much in the first place, that doesn’t fly either. EM Acoustics offered us the best of both worlds – breathtaking performance at a price that enables us to provide great service profitably.”

“Quite often in the corporate world, we’re squeezed by video, projection and lighting and we have to hang very few speakers in awkward positions, so having a line array element that sounds great on its own is a massive bonus,” he continues. “Normally we should hang at least six of them together, but we don’t always get the choice, so that instantly captured my attention. I then listened to the large format HALO-A and was really impressed with the openness and ease of its sound. It’s not a heavily processed box – it’s built the old-fashioned way of ‘make the speaker sound good when you build it.’ Until I heard that, I would have sworn all the other line arrays didn’t sound processed, but in comparison, they really did.”

“I just kept coming back to that effortless, open sound,” adds Ross. “It never sounded like it was trying hard. While we do a lot of quiet and delicate stuff, every now and then we need a bit of power. Quite often, the polite, delicate speakers don’t do power and the powerful ones don’t do delicate, but this is a really good all-rounder – it does detail at low volumes and then preserves it at high levels without ever getting shouty and hard. But it’ll still pin you to the back wall if that’s what you want!” Another laugh . . .

Ross also comments on the parity of voicing between all three line array systems – HALO-A, HALO-B and the compact  HALO-C. “The transitions between the systems are stunning; even with HALO-C ran as front-fill to HALO-A, it’s just amazingly smooth. They’ve done a very, very good job with the voicing.”

Ross could have chosen any number of systems for the ICC Auditorium – but what pushed things EM’s way? “Quite simply, the combination of HALO-A and HALO-B was absolutely perfect in that size room. It’s a big one, so it needed a large format array – that instantly priced us out of certain options. We looked quite carefully at a number of other rigs as well, but it came down to the fact that we wanted a system that sounded good out of the box – we’re often pushed for time during setup. If you give me an hour or two, I can make any system sound beautiful, but if you give me just 10 minutes, I can still make an EM rig sound beautiful. Plus, I wanted to keep the consistency between what we’ve got in the ICC and the rental stock at Elstree. Eventually, we’re going to roll it out into our other venues as well – my aim is to get as many people as possible in front of it.”

On the feedback garnered by the new installation, Ross says: “Even though it’s only been open a short time, the comments we’ve had back from engineers are that this is the system where they’ve had to do the least work ever, be it for headset mics or lavaliers on stage, right up to full band systems.”