Beneath The Surface: Observations On Sound Reinforcement In China

As practitioners of performance audio in North America and Europe, we are very fortunate. I make this assertion having just returned from an adventure in the Middle Kingdom, observing production of a large western-style music festival in Shanghai, China.

Shanghai is a modern and global city with 23 million people, some of the tallest buildings anywhere, and the world’s largest public transport system. On the surface it’s the epitome of the modern Asian metropolis.

But as a friend who lives in Shanghai said to me, “Scratch the surface, and just below it is China.” I think I’ve learned what he meant.

As an observer, I was encouraged by the positive results the Chinese audio crews achieved. But I could tell that just below the surface there is cultural and historical adversity for production personnel to overcome.

This is compounded by the fact that they have had less opportunity to accumulate the depth of knowledge we take for granted and rely on every day to support artistic presentations.

The festival is the creation of independent music promoter and visionaries Archie Hamilton and Nathaniel Davis of Shanghai-based Split-Works. 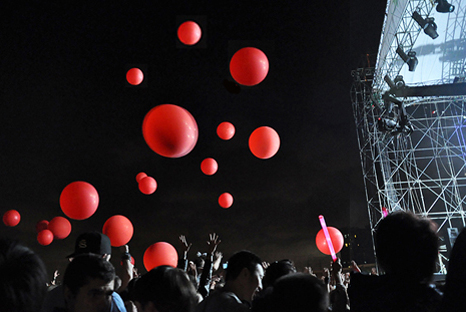 The Black Rabbit Festival in Shanghai during the headliner performance.

Hamilton enlightened me on the challenges of audience development, particularly as it relates to production values: “The China concert market is developing steadily if not linearly. When I moved to China six years ago from England, my inspiration for a festival was Glastonbury. It had all the diverse entertainment elements allied to high production values, all of which I hoped to re-create in Asia.

“In mid-2007 we promoted our first festival in China, and we were probably one of only three festivals in the country at that time. I invested in western production values and headline international bands and I lost my shirt as the audience just wasn’t ready. Ticket sales were capped at the hard core music fans. At that time the Chinese audiences did not appreciate a well presented performance with proper production (there was no precedent). 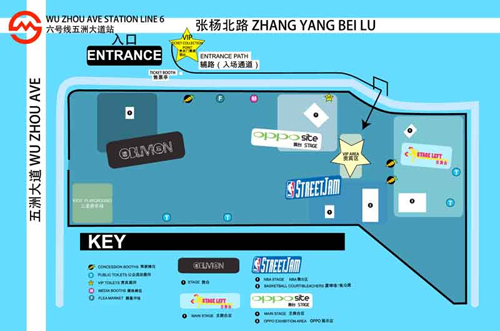 A map showing the configuration of the four stages erected at the Shanghai Rugby and Football Club for the Black Rabbit Festival. (click to enlarge)

“Today there are probably a hundred festivals throughout China, and not many of these pay due care and attention to sound and lights. But I have always maintained that we can educate the audience to appreciate good production, and these efforts have been successful. Our ticket sales are much better, the events enjoy production levels approaching those of what one might expect in America or the U.K., and I believe our audiences recognize that.”

Quality & Continuity
Hamilton has put his money, and his sponsor’s money, where his mouth is. All four stages erected for the Shanghai event, held at the Shanghai Rugby and Football Club, were well fitted with gear that any North American or European company might have in their hire inventory: JBL VerTec, NEXO, Martin Audio, KV2 Audio, and HK Audio loudspeakers; Avid VENUE Profile, Soundcraft Vi6, Yamaha PM5D, LS9, and M7CL consoles; Crown and Lab.gruppen amplification; and plenty of Shure wireless microphones and Sennheiser in-ear monitoring systems. 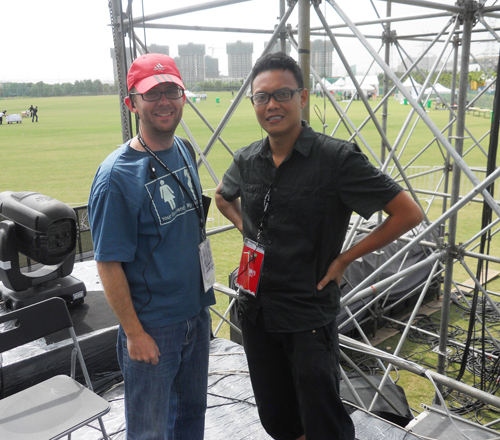 “I’ve been operating in China for nearly eight years, and it’s very different here,” Leeds told me. “Chinese production personnel are still learning how to put these large western style festival events together. I’m trying hard to enlighten the vendors to provide regular and comprehensive maintenance, and this is a challenge.

“We badly need rigging education here, which hopefully will come in time. Back to back dates on these events made for some logistical challenges, but we managed, and all in all the festival was a success.”