Behind The Music With Butch Vig, Producer Extraordinaire

A legend of the game reveals some of his trade secrets and shares some fond, unforgettable memories...

It’s crazy to think that this year marks the 20th anniversary of Kurt Cobain’s passing – a true game-changer in the music industry, and a man who, in many ways, revolutionized music, inadvertently spawning a whole new scene. Nevermind is a seminal record, and its success was the catalyst for record labels’ mission impossible, the search for “the next Nirvana.”

Although he might not have known it at the time, those 16 days recording Nevermind would change Butch Vig’s career forever. It paved the way for a remarkable musical journey, the production of a string of hit records for supergroups such as The Smashing Pumpkins, The Foo Fighters, and many more… Not to mention Garbage, Vig’s own band, which has enjoyed more than 17 million record sales over the last two decades. This legend of the game reveals some of his trade secrets, and shares some fond, unforgettable memories…

Paul Watson: Your career speaks for itself, but first up, how did it all begin for you?

Butch Vig: Well, I played in bands in high school in a small town in Wisconsin, and then I went to University in Madison. I started getting into the local music scene, and joined a band, which was sort of a power pop, new wave band called Spooner; and Duke [Erikson] from Garbage was the guitarist and lead singer at the time. I also got a degree in film, and ended up doing a lot of music for film; a lot of synth, and abstract music, and that’s where I kind of got the recording bug.

When I started Spooner with Duke, we were into our music and wanted to record, but we didn’t have any money, so we started going into some funky demo studios—four- and eight-track studios—and I just took an interest in the recording. I eventually got a four-track and put it in my apartment, and ended up doing sessions with Steve Marker, just for fun; and when we graduated from college, I was still playing in a band, but I decided to invest with Steve, and we rented this space on the east side of Madison, and that’s when we started Smart Studios in 1983. We each saved up about two grand, bought an eight-track, got a bunch of used gear, and moved into this funky warehouse and started recording punk rock bands [smiles].

And with no formal training, right?

I’d taken four semesters of electronic music, but that was really learning how to use Moogs and ARP 2600 synthesisers. I learned how to do field recording, going out into the real world and recording sound, and taking it back and manipulating it, like abstract film sound music. I found that really exciting, and I still love weird noises and odd things, which I try to squeeze into Garbage songs all the time.

How did you make a name for yourself in the early days?

It was around ‘89/’90 that I started to get noticed for my production work, in particularly by a band called Killdozer; they’re an acquired taste, but [Smashing Pumpkins frontman] Billy Corgan heard them and loved them, and called me; and then [Nirvana’s label] Sub Pop heard them, so they sent Nirvana to my studio. Really, Killdozer really opened up all those doors for me, and of course Nirvana and the Pumpkins changed everything, and that allowed me to pick and choose my projects. That was around ‘91 and ‘92, and I was unbelievably busy.

At that point, when Nirvana and The Pumpkins had been successful, I had probably done 1,000 records, working for indie labels, doing singles, demos, all sorts. I was kind of bored of guitar, bass, and drums, and I’d heard the Public Enemy records, and really loved the way that they were using samplers, so I bought an Akai S1000 sampler, started screwing around with that, and came up with the idea of using that on remixes.

This led to me remixing for Beck, U2, Depeche Mode, and Nine Inch Nails; I would erase everything on the tape except for the vocals, and record all the music, and a lot of it was going through the sampler, so I could manipulate it. That was how the idea to form Garbage came about. 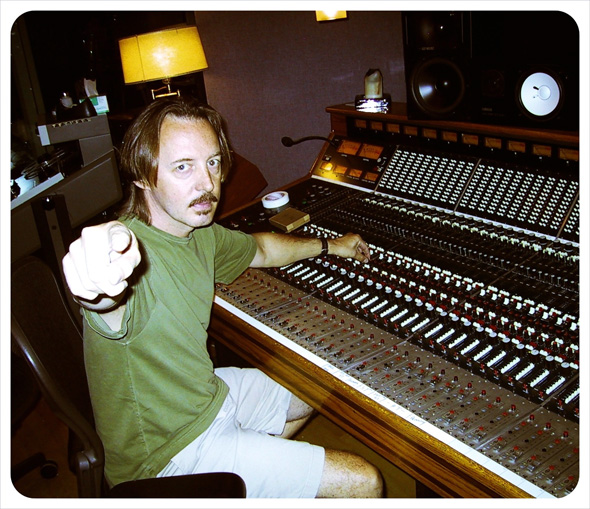 I remember watching you trigger samples back in 1999 at a Garbage show at UCSD… I was in the mosh pit!

[laughs] That’s cool, man! Yeah, I mean, it was just a cool way to do things; you could move things around, filter things, cut things up, run things backwards, and it sort of frees you up, you know? At the time, I was working on analog tape, and there are certain limitations in ways you have to record with that, and the sampler made everything feel free. Garbage was really one of the first bands that embraced using the technology that way; the first record was still done with tape, but we had a couple of samplers, an Akai S1000 and a Kurzweil K2500, and a lot of things went through those; we used beats, hip hop, electronica, fuzzy guitars, weird noises, pop melodies – a lot of electronic and programming.

I bet that surprised a lot of people…
It did. When the first Garbage record came out, because my name was attached to it, a lot of people expected it to sound like Nirvana or The Pumpkins—grunge or alternative rock—and I think they were shocked at how different it sounded. One of the reasons that we were able to find such success was finding Shirley Manson. She is an incredible singer and a great front-person; she has become the face of Garbage, and rightfully so, because she is amazing.

Garbage was really a reaction to all of the bands after Nirvana. The record companies signed a thousand bands that they were hoping would sell records like Nirvana, and I felt I had to do something that made things more interesting for me again, hence the samplers. That’s why I started Garbage, which is all about writing pop songs. We love using the studio as a canvas and as a tool, and it’s liberating for me. If you listen to our body of work, a lot of our songs sound completely different, and the glue that holds us together is Shirley’s singing; luckily, she’s got a very strong presence, and that really allows us to do what we do.

How would a record like Nevermind have sounded if you had the technology available to you then, that you do now?

[smiles] Well, the recording of Nirvana for Nevermind was actually really easy; we did the whole record in 16 days. They had rehearsed so much; they were super tight, and they wanted to sound good. Everyone thinks Nirvana had a slacker mentality, but that’s not true at all—they wanted to make a great sounding record, and once Dave Grohl joined the band, they were just rock solid tight.

The record went pretty fast; I would be in around noon, and they would come in at 2 pm, with everything ready to go. We would record, track a song, do a few overdubs, then take a dinner break, and then we’d work until 9 pm, and they’d go party, and I’d do a clean-up and maybe a vocal comp. Records now sometimes take three or four months, depending on who you’re working with.