Behind The Glass With Hugh Padgham: Does It Sound Any Good?

A candid conversation with engineer/producer Hugh Padgham, who was behind some of the greatest recordings of the 1980s and 1990s

Ah, the eighties. Every record sounded like it was made in a stadium, every singer working their uppermost range until it seemed as if their vocal cords were about to leap out of their throat, every hit wrapped in a glossy package of shimmering guitar leads and silky bass.

And, of course, every snare drum was passing through a gated reverb.

Hugh Padgham is largely responsible for many of those sounds—particularly the latter— but he’s also responsible for crafting many of the greatest records of the era, The Police’s “Every Breath You Take,” Genesis’ “Tonight’s the Night,” and Phil Collins’ “In the Air Tonight” among them.

His ultra-clean signature sound raised the bar for every engineer and producer of the era and had a major impact on the shift from the dead, close-miked records of the seventies to the open, ambient sounds of the nineties and beyond.

Padgham’s career started at London’s Advision Studios, where he served as tea-boy (the British equivalent to a runner), but it wasn’t until he moved to Landsdowne Studios in the mid-1970s that he received formal training, quickly rising through the ranks from assistant engineer to chief engineer.

In 1978, he took a job at Richard Branson’s Townhouse studio (which sadly closed its doors only recently), which gave him an opportunity to engineer for various Virgin artists, including XTC, Peter Gabriel, and Phil Collins.

It was also at the Townhouse that Padgham first met a young bass player by the name of Gordon Sumner. . . soon to be known to the world as Sting. A couple of years later, just as Sting’s band The Police were poised to reach the heights of international fame, Padgham was brought onboard to co-produce their massive hit album Ghost in the Machine.

We met up at his West London studio, Sofa Sound, one bright summer afternoon, where the affable Mr. Padgham, looking more like a ruffled professor than a superstar pop producer, shared his unique perspective on the evolution of record-making through the past two decades.

Howard Massey: Are you fully sold on digital recording these days, or do you still use tape?

Hugh Padgham: I’m not anti-digital per se, because you’ve always got to stay as current with things as you can. But people who grew up with analog gear can hear the difference, and there’s no doubt in my mind that analog sounds better: it’s kinder to your ears, and not as harsh. 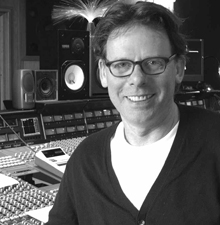 Having said that, there’s also no question that digital now sounds better than ever before. These days I’m running all my sessions at 96k, 24-bit, and that’s a big improvement over 44.1 or 48. Of course, the original RADAR, which was 44.1, 16-bit, sounded a lot better than other machines, so I think a lot of it is down to the converters.

One thing I really miss about analog recording is tape compression, though. By using it carefully, you can actually get some 10 dB of extra level before a well-recorded transient signal like a snare drum clips.

That’s one reason that digital sounds so harsh—because you’re not getting any of that nice rounding off of the transients. So these days, I tend to do my initial tracking onto 24-track tape and then copy that into Pro Tools. That way, at the very least, my drums, bass, and guitars hit tape.