If you've spent any time at all using plug-ins to coax a great-sounding mix from "inside the box," Nocturn is like manna from DAW hardware heaven!

My DAW desktop surface is more crowded than ever–and I’m loving it! I just added the new Novation Nocturn Plug-in Controller to my small army of DAW accessories.

As DAW plug-ins become more complex and intense, their GUIs (graphical user interface) have become more jam packed with more parameter controls than ever! And in order to keep their GUI’s screen size to a minimum, the controls and buttons keep getting smaller and smaller.

Even though I get new glasses often, the controls are not getting any easier to find, touch and adjust with a mouse. Plus during the course of working many hours adjusting plug-in after plug-in, my right hand and arm get very sore.

If you’ve spent any time at all using plug-ins to coax a great-sounding mix from “inside the box,” Nocturn is like manna from DAW hardware heaven! “At last, at last, great almighty, free at last!” my carpal tunnels rejoice!

Novation Nocturn
Nocturn is a dedicated controller surface for instant and intelligent control of any automatable plug-in within every major sequencer/DAW, including Pro Tools, on both Macs and PCs. It’s totally compatible with VST, AU, RTAS and TDM host systems/computers. 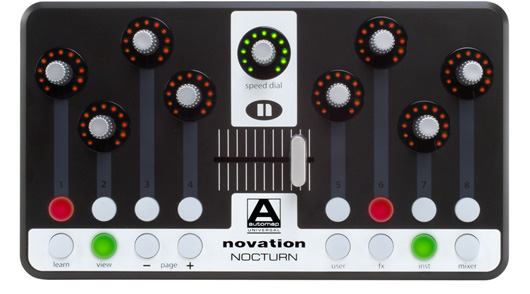 Ultra low in profile, Nocturn measures 9.41 by 5.39 inches and lies flat on any desktop-I have mine between my QWERTY keyboard and monitor.

It connects via a side-mounted USB spigot and has eight, touch-sensitive continuous encoders each ringed with 11 red LEDs. These encoder LEDs provide visual feedback that the parameters you’re adjusting on Nocturn are changing in the plug-in. It’s cool to see them change after you’ve automated a parameter(s) too.

In addition, there are eight large backlit large push buttons, a 45mm crossfader, and a Speed Dial for instant access to any plug-in parameter-just hover over any parameter on the plug’s GUI with the mouse and adjust it with Speed Dial. There are also eight more lighted buttons specific to using Nocturn and its sidekick, the Automap 3 Pro software.

Nocturn uses Automap 3 Pro software to automatically assign plug-in parameters to each of the controller knobs and buttons. 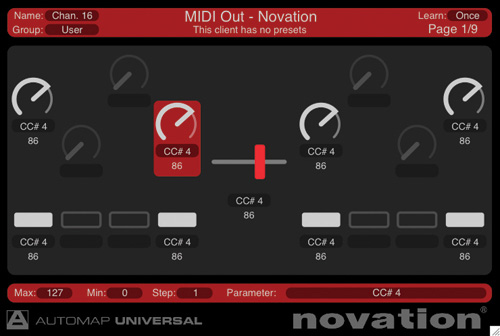 To set Automap 3 to work programming Nocturn before launching Pro Tools, I called up the Plug-In Manager software to scan all my plugs and map them.

The software creates a copy of the plug-in software and adds its wrapper. This wrapper adds Nocturn’s frame around the plug’s GUI so you know what plug has been wrapped when you insert it into your session.

Now when I call up any wrapped plug-in, a transparent Control Map Window appears along side the plug’s GUI to show which Nocturn controllers control which parameters on the focused plug-in.

Ninth generation of the series is stated to be 50 percent more powerful than their predecessors, with a choice of six models.

ASWS58 for handheld mics available in five colors; ASWS30-B is compatible with most slim gooseneck mics up to 14 mm in diameter.