Back Of The Napkin: Upgrading A Worship Audio System With A Simple Sketch

Using proper loudspeaker placement to achieve the goal of “putting the sound where the people are."

Many problems with house of worship sound have nothing to do with the mix, but how the sound system covers the listeners. Maybe it’s too loud in the front, or too quiet in the back, or maybe both. Maybe there are “good seats” and “bad seats” for being able to understand what’s being said.

These are system issues, not mix issues. Researching sound system optimization techniques quickly leads down a rabbit hole of FIR, FFT, and DSP. People end up discouraged and confused, and no improvements are made.

As a professional sound system tech, I fully acknowledge the complexities and nuances of system optimization. It can involve decoding cryptic lines displayed by an expensive analyzer, or tweaking delay times within fractions of a millisecond, and it’s fair to see how this can seem a bit like black magic.

Of course, that level of detail is often required, but the simple fact is that most optimization problems I’ve seen in houses of worship can be solved simply by pointing the loudspeakers in the right direction. All the processing is the icing on the cake and is only applied after we have accomplished the much simpler task of loudspeaker placement.

Huge improvements can often be made simply by adjusting the loudspeakers a church already has, with no need to upgrade or buy anything new. Let’s learn how.

The goal here is simple: put the sound where the people are. That’s it! The strategy is division of labor. We know where the listeners are going to be, and we’re going to give each loudspeaker its own area to cover.

Start by sketching out a floor plan of the sanctuary. It doesn’t need to be accurate to the inch or perfectly to scale. You also don’t need any fancy software – it can be done on the back of a napkin. Figure 1A shows a layout that I’ve found to be common for smaller houses of worship.

Make two copies of the sketch. On one, add the current loudspeaker positions along with arrows to indicate their current aim. Figure 1B shows a pair of left-right main loudspeakers mounted high on the wall along with two smaller fill loudspeakers positioned on the edge of the front platform. This is the “before” layout.

On the other copy of the diagram, make the “after.” To begin, divide the audience area into logical portions that will be assigned to individual loudspeakers. Don’t overthink this – imagine the loudspeakers are spotlights and you want to light up the crowd.

Each loudspeaker should be aimed through the center of its designated coverage area. There will always be areas of over- and under-coverage, but aiming through the center “splits the difference,” giving the most even result. It will become clear at this point if your church has enough loudspeaker positions to properly cover the congregation, and if not, the sketch should be helpful in demonstrating to leadership where the gaps reside.

Figure 1C shows how the existing wall-mounted loudspeakers have been splayed outward to cover the side seating. The pair of center fills are now each covering half of the center seating area. We’re halfway there. Notice that the center fills are no longer located on the platform. To understand why, let’s look at the final pieces of the puzzle: vertical position and aim.

The front-to-back loudness difference is a major issue for a lot of smaller sound systems, and it’s a matter of height. With the edge-of-platform placement, the nearest seats are just a few feet away from the loudspeaker, while the rear seats are much further away. Because sound waves lose loudness over distance, the front ends up much louder than the back.

Figure 2A shows the side view, with the horizontal blue line indicating the ear height of a seated audience. Figure 2B shows the high-frequency coverage from the loudspeaker. Yikes!

The folks in the front are getting blasted. Since each color bar on these diagrams indicates 3 dB of loudness, we can determine that the front seats are 18 dB louder than the rear seats. There’s no way to mix the service at a level that’s comfortable for everyone – that range is just too big. 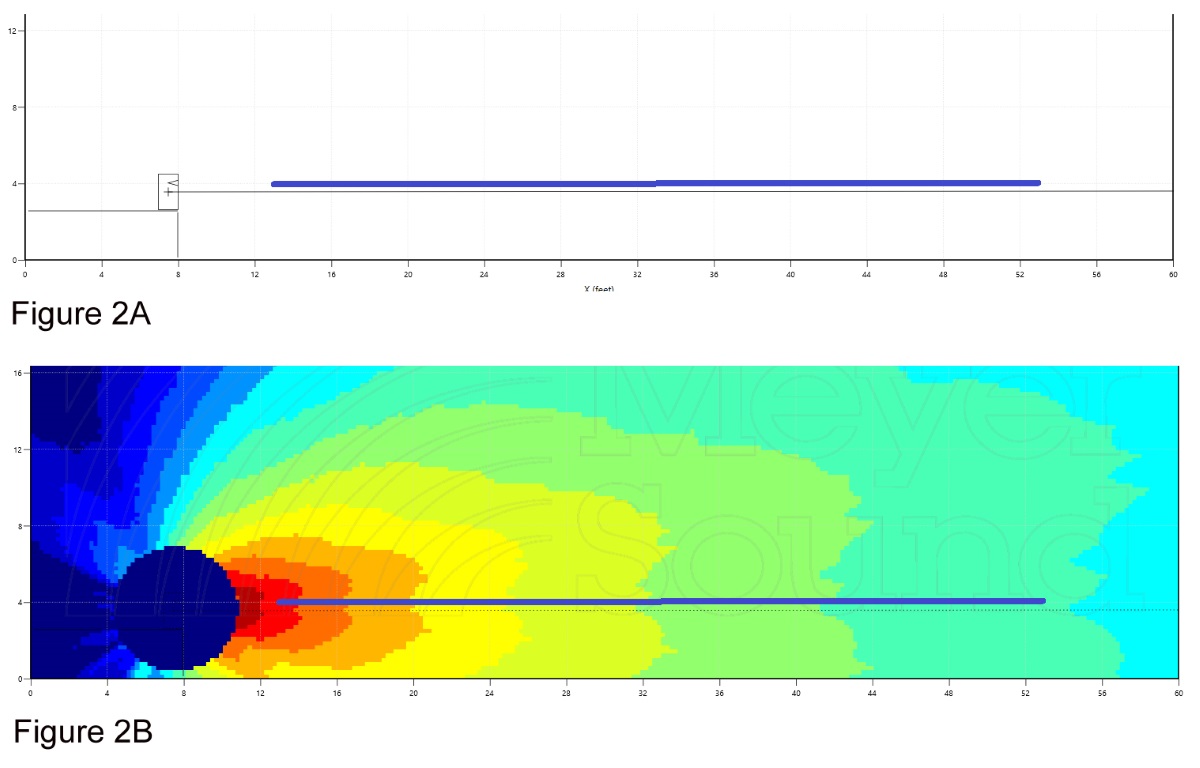 Figures 2C and 2D show what would happen if we spend $50 on a loudspeaker stand. Much better! By getting the loudspeaker a bit further away from the front seats, we cause a bit of level drop down in front. 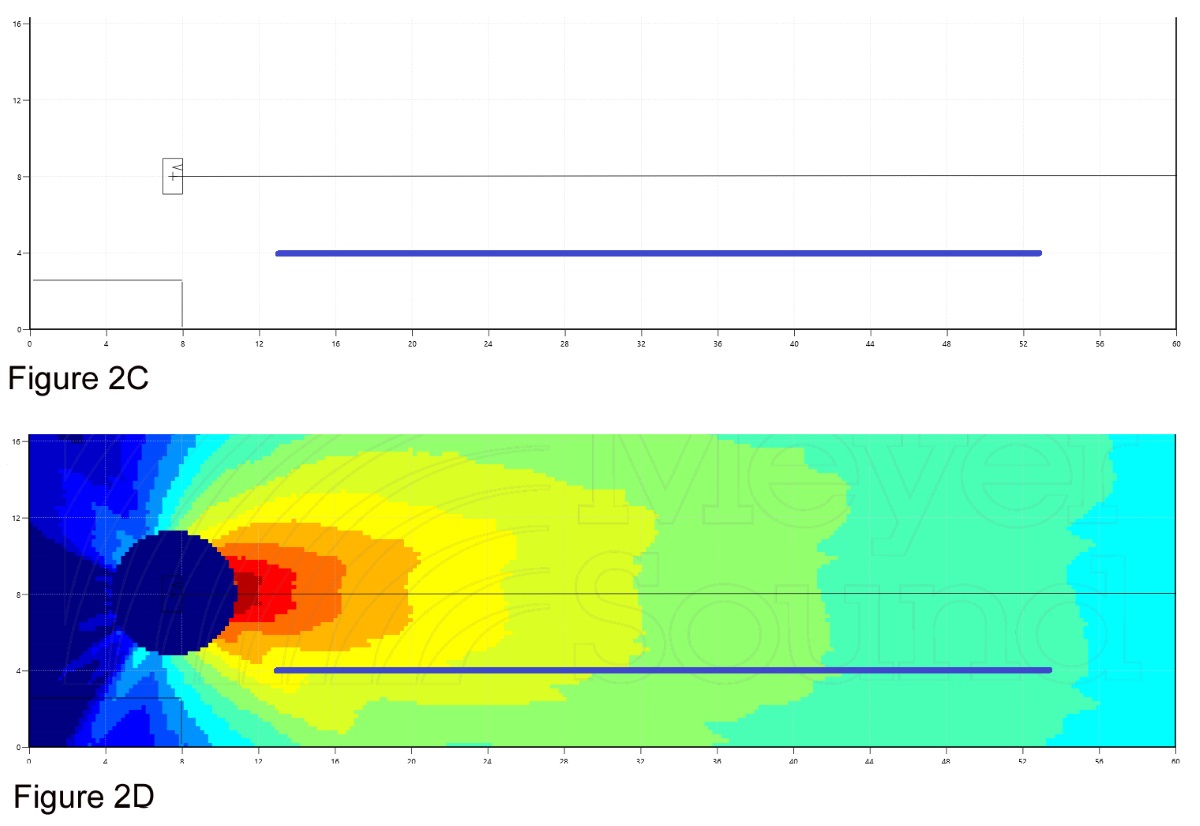 Additionally, since the loudspeaker is aimed towards the rear of the seating section, the front seats are on the edge of the coverage pattern, which allows us to take advantage of the fact that loudspeakers lose level as we move off center. Now our listeners are all within a 9 dB range from front to back, which is an incredible improvement just from buying a loudspeaker stand.

In summary, support the goal of “putting the sound where the people are” with these three simple steps:

• Give each loudspeaker its own area to cover
• Adjust the horizontal aim through the middle of the section
• Adjust the vertical aim towards the rear seats, getting height where possible

As an added bonus, the division of loudspeaker labor means it’s easy to turn down an amplifier if a certain section is too loud.

One major point to mention here: a loudspeaker should absolutely never be suspended by its handles or by any method other than what is designed, tested, and recommended by the manufacturer. Period.

In virtually every case of rigging failure, human beings have done something they shouldn’t have. This is not a good reason to be on the front page of the newspaper. Rigging work should only be performed by qualified professionals.