As company president Frank Thompson points out, “We needed a scalable system for a range of events that could do a room for 300 or 2,000 people. WPM was an ideal choice and has been really working well for that purpose.

“Because the space was a very large oval-shaped room with a dome ceiling and limited rigging heights, the setup for the Washington Hilton ballroom included 24 WPM in four hangs, two with five boxes over the dais and two with seven on the outer edges of the stage, in a line even with the front edge to maintain sightlines for the large screen behind the stage. 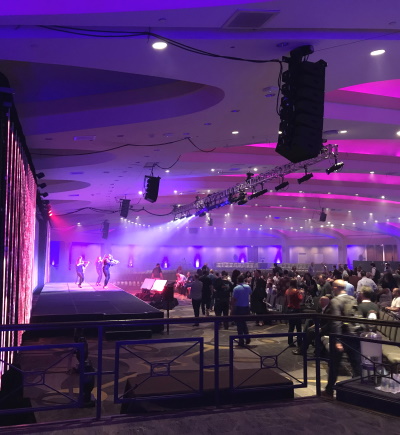 “We also used four CDD-LIVE 12s for delays halfway back in the room along with CDD-LIVE 8s for frontfills on the front edge of the stage and extra fill at the raised portion of the floor at the end of the room. Four SX218 subs were ground-stacked in front of the stage with three iK81 amps and two-box resolution which was more than adequate for the space given the WPM’s exceptional coverage.”

Commenting on WPM, Mark Richardson, head of the Audio Department, adds: “The clarity of the box and the amount of volume it puts out is pretty remarkable for its size. We use a lot of A1s on these events and they all love these boxes because they’re small, provide great coverage and will go really loud.

“In addition to the sound quality which we’ve come to expect from Martin Audio,” Richardson continues, “what really makes these stand out is the ability of the Display software to tailor the response of the room and keep the energy away from architectural structures and areas where you want to control your reflections, and the amount of control that gives us is really impressive. Also, the ability to factor in elements like crowd density and the humidity level gives us a really deep level of control that we haven’t previously experienced.

Asked about the system’s performance, Thompson concludes: We got exceptional clarity for speech which was key along with high quality music reproduction for a range of intro segments such as four women playing violin, a solo sax player playing to a track and a solo violinist playing ZZ Top.

“Throughout, the system worked perfectly. WPM is so scalable it enabled us to provide excellent coverage and audio quality in a big room with a 30-foot ceiling that was an acoustic nightmare. Every little shutout was like a totally weird echo chamber when you stood under it, but it wasn’t an issue at all with WPM which is so directional because of Hard Avoid®, we could completely avoid the ceiling. Best of all, the client was ecstatic, not just about the audio quality but the way we covered the whole event and has already booked us for next year.”