The audio network extends the auditorium's adaptability to a variety of uses.

Included in this setup is a large Aviom Pro64 audio network which is used to route audio to and from various locations in the space including the PA system, control room and production room.

Designed and supplied by Venuetech, LLC, the audio system supports the 5,000-seat auditorium, which hosts live performances such as plays and orchestras, movie screenings and conferences.

The facility also features an automated motorized seating system, which allows the chairs to fold back and out of the way so the hall can be converted into a large indoor sports arena.

The flexible nature of the Aviom Pro64 audio network allows it to easily support any event that takes place in the hall.

To accommodate the needs of the facility, the school relies on its Aviom Pro64 system, which can be reconfigured easily to meet the demands of any event.

The Aviom equipment provides the engineers with the ability to distribute audio from the various vocal and instrumental performers, actors, presenters and announcers to multiple locations throughout the facility, including the speaker system and front of house console.

It can also be routed to a production room, where live audio recordings can be made. In the case of a sporting event, audio commentary can be executed from the control room where the front of house console is located.

“Aviom was chosen for the audio distribution in the Multipurpose Hall because it is the only system that can respond to the flexibility required by the arena,” said Elie Khairallah, technical director for Venuetech.

“Since the elements of the Pro64 network are easily reconfigured and run on a single Cat-5 cable, the system is easily adapted to the architectural beauty and various functions of the facility.”

Three Aviom 6416m Mic Input Modules on stage distribute microphones and instruments to the various other points of the network.

The stage audio is routed through an MH10 Merger Hub to MH10s in the Production Room, the Control Room and to one connected to the speaker system. The 6416m units on stage are controlled by a combination of an Aviom MCS Mic Control Surface and an RCI Remote Control Interface.

From the Control Room audio is routed to and from three 6416o Output Modules and one 6416i Input Module connected to the front of house MIDAS Heritage 3000 console.

A second 6416i on the console routes to the 6416o Output Module on stage that feeds the PA system consisting of Meyer Sound line arrays, Mica and Melodie speakers. 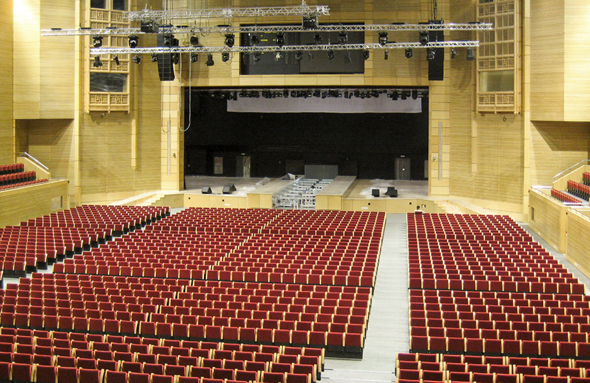