Aviom has introduced its next generation personal mixer, the A360, which offers new levels of control and customization to the personal monitoring experience with a number of new features.

“The number one feature we’ve been asked for over the years is more channels,” says Chandler Collison, Aviom director of marketing. “The key was to provide more content and control for the mix without just throwing more channels and complexity at musicians who are trying to focus on music not mixing.”

The A360 features an advanced 36-channel mix engine which can be used to mix up to 17 mono or stereo channels plus mono or stereo ambience. For each of the A360’s standard mix channels, users can adjust volume, tone, and reverb.

The A360 also includes a revolutionary Stereo Placement pan-spread control that allows the width of a stereo channel’s image to be controlled independent of its left-right placement in the stereo field. This approach, which is ideal for IEM and headphone users, improves spatial perception as well as sonic clarity of the mix.

The seventeenth channel on the A360, the Dual Profile Channel, allows users instant access to two independent combinations of channel volume, tone, reverb, and stereo placement for a favorite channel. This Dual Profile Channel may be set to mirror one of the 16 standard mix channels, or this channel can be used for additional mix content.

In addition, ambience can be added to the mix either using the convenient onboard ambient microphone or by using network channels. Musicians can add or remove ambience with the single touch of a button.

“Musicians aren’t engineers, and a mixer designed for musicians needs to respect that,” says Ray Legnini, Aviom product research and development manager. “Features like the Dual Profile Channel, One-Touch Ambience, and Instant Mix Recalls allow musicians to adjust their mix during a performance without diverting their attention from their music.”

Designed specifically for users whose primary focus is performing, not mixing, the A360’s features are instantly available—no menus to navigate, no softkeys, and no complex programming to get the system up and running.

The A360 also offers the ability to easily connect a subwoofer, shaker, or mono wedge monitor using the Mono Mix Out control that feeds a rear-panel XLR Jack. In addition, there are standard 1/4-inch and 1/8-inch TRS stereo outputs.

The new A360s can be seamlessly integrated into existing Aviom personal mixing systems. Based on an enhanced version of Aviom’s Pro16 A-Net protocol, Pro16e, the technology driving the A360 allows multiple 16-channel banks of monitoring content to be delivered over a single Cat-5 cable. Each A360 in a system may use the default channels, or audio channels can be selected and organized individually for each personal mixer, drawing from a network pool of up to 64 channels.

“We really set out to give musicians meaningful enhancements so they get a more musical mix without a lot of work,” adds Legnini. “That’s particularly true for musicians using in-ear monitors.” 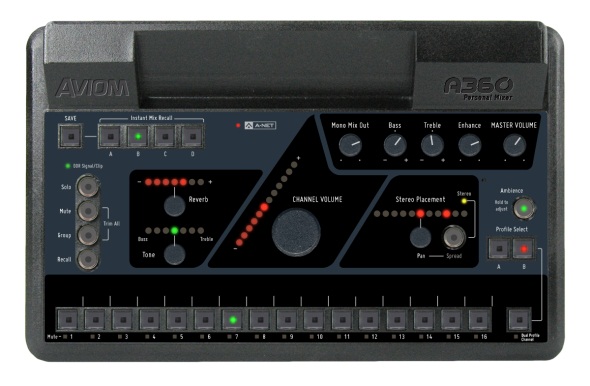