Audio Visualization: Is A Picture Worth A Thousand Words In Audio?

The value of thinking about -- and looking at -- the mix in a graphical way.

Now that we have the tools to depict key elements and processing, let’s take a look at the mix as a whole.

Any musical performance that features more than one melodic or rhythmic element, be it live or recorded, requires these elements to be mixed. Traditionally music was performed live and the mix was achieved by intelligently positioning the individual mix elements and augmenting where necessary. (You want the violins to be louder? Get more violins!)

In the early days of recording, where the performance was captured completely live with one or two microphones, a mix could be achieved by moving the musicians relative to the microphone(s), often during the performance to create dynamic variation.

In live performance we’ve evolved methods whereby each key element is miked or taken direct individually, so that we can treat them individually before combining them together in the mix.

So what happens if we combine our drum kit with the guitars and throw a vocal on top? (Figure 7) 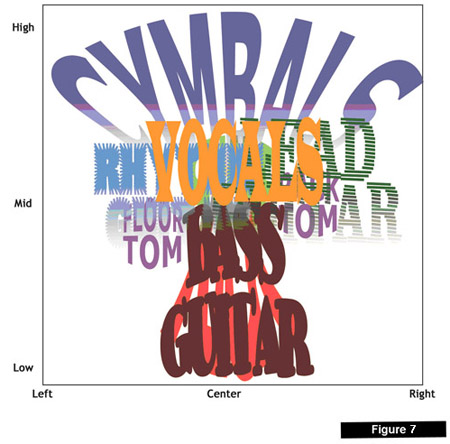 It’s starting to look a little messy now but a mix is a complex interaction of multiple elements, so that’s quite normal. The vocals have been compressed to narrow their dynamic range and help them sit on top of the mix, but there’s still a risk of them being swamped by the other instruments that have energy in the same frequency range (such as guitars). Being as the vast majority of music we mix at gigs is song based, ensuring the vocals can be heard is a key challenge.

So what can we do to make them stand out a bit more? The answer, of course, is reverb, depicted here (Figure 8) using an outer glow. They key is to use a reverb that’s small enough to ensure the vocals don’t sound too distant while exploiting the spectral smearing and stereo widening that can help to make the vocal sound bigger. 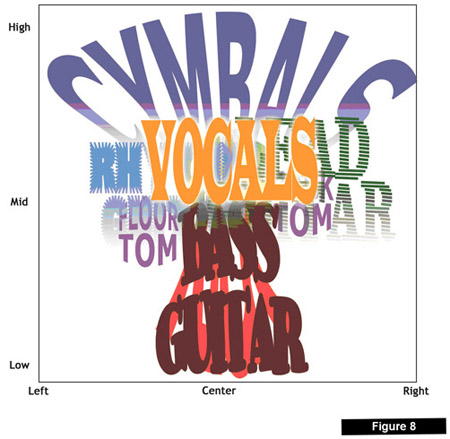 A plate with a reverb time between 1.0 and 1.6 seconds and a pre delay below 10 ms usually does the job. I sometimes find that rolling off the top end (or adjusting the high ratio) of the reverb helps to make it sound more subtle – less like a digital reverb and more like a natural acoustic space around the vocal.

But that’s not the only way to make a vocal stand out in a busy mix (Figure 9). Another trick I like to use is to apply a slap-back delay to the vocal, here depicted by the black drop shadow. A slap-back delay can be anything between 50 and 300 ms, but I find a setting of between 100 and 180 ms works particularly well on vocals in mid-tempo songs. 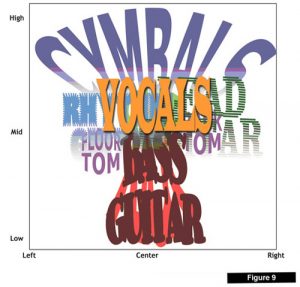 The feedback gain should be set so there is only one audible repeat – typically achieved by setting it to 10 percent. This creates a single echo very close to the vocal which has the effect of doubling it and helping it stand out against the background noise. Again rolling off the top end of the effect can help make it less obvious and more subtle.

As mix engineers we’re always striving to build better mixes, so hopefully these pictures have been worth a few thousand words and have provided a unique insight into the process.

We might think we mix with our ears, but our brains are doing all of the hard work, so anything that can help us visualize such abstract concepts will enable us to better understand the nature of the mix and produce consistently high-quality results.