After only three months from initial sound design to installation, Aspen Academy officials, teachers, students and parents are now listening and learning without distractions thanks to the Primacoustic sound absorbing panels.

“We had significant speech intelligibility and sound bleed challenges to address in our 1,000 seat auditorium,” says Lynda Sailor, co-founder of Aspen Academy. “The speech intelligibility problem meant that parents were not able to understand the children speaking from the stage during our regular variety shows. This was very frustrating for the parents, teachers, and the children.” 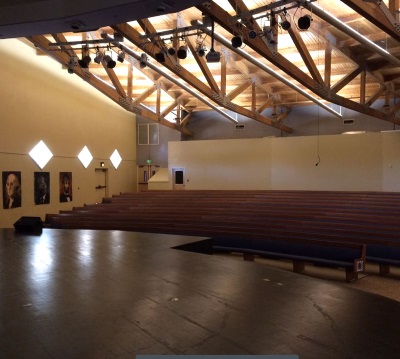 The Academy’s auditorium was built in the early 1980s and was not designed for live production and live sound. The auditorium has high ceilings and angled walls that resulted in echoes, reverb, and sound bleed throughout. The Primacoustic Broadway and ThunderTile acoustic panels addressed all of the sound reflection and echo issues.

“We were able to add sound absorption to the entire room for the cost of what other companies were only able to do the back wall for,” says Sailor. “So in addition to being an extremely effective solution, the Primacoustic acoustic panels solution was much more affordable than any other company we had talked to.”

“In addition to our student productions, we also conduct simultaneous classes on the auditorium stage, in the music studio, and in the dance studio,” says Sailor. “When we had all three areas going, there was a lot of spillover between those rooms, such as the music from the auditorium stage interfering with the classes in the back. Fortunately, Primacoustic was able to solve this sound bleed problem between the rooms and the auditorium.”

To address sound bleed between the rooms, Primacoustic ThunderTile T-bar acoustic ceiling panels were installed to help isolate the sound in and out of the rooms. The Primacoustic ThunderTile is a unique acoustic T-bar ceiling tile that combines the efficient absorption characteristics of high-density glass wool with the sound-blocking attributes of gypsum board. This design delivers effective control of the reverberant field while eliminating primary reflections that make communication difficult.

“The Primacoustic ThunderTiles installed in the ceilings of the music room and the dance studio made a tremendous difference in the sound bleed between the rooms,” says Sailor. “Once these panels were installed, our staff was able to teach in the respective areas without having to worry about competing for attention from the students, which was a real relief to all of us.”

One ancillary benefit the Primacoustic Broadway fabric covered acoustic panels provided was aesthetic in nature. “While sound absorption obviously was most important to us, aesthetics were also important,” says Sailor. “With the Primacoustic Broadway acoustic wall panels, were able to select a fabric that went along with our color scheme and the décor of that room. The acoustic wall panels were laid out in an artistic way that was visually pleasing. We also have some of the panels hanging from the ceiling, and they almost look like artwork as they line the back of the auditorium.”

Ultimately, the Primacoustic Broadway sound absorbing panels and ThunderTile acoustic ceiling panels were able to provide sound absorption that addressed the speech intelligibility and sound bleed issues the school was having while adding an aesthetic appeal to the auditorium’s interior.

“We did a before and after video standing in the back of the room and clapping and hearing the echoing,” says Sailor. “The before video has lots of echoes, and in the after video, there’s no echo whatsoever. It is a night and day difference. We’re so happy with the Primacoustic sound absorption panels that we’ll be using them in the renovation of our cafeteria this summer.”

New System For High-End Venue In Poland Driven By Powersoft