Ask Jonah: The Differences Between A Subgroup And A VCA

The difference between VCAs and subgroups becomes important when we have individual channels routed to different destinations.

Dear Jonah:
What’s the difference between a subgroup and a VCA? – Anonymous

In a word? Summing. Think about a mixing console for a second – a bunch of inputs enter and get all summed together into a single stereo signal, the level of which can be adjusted with the master fader. A subgroup is the same idea: everything you route to it gets summed together, and the resulting signal can be controlled with the group fader and routed somewhere.

A VCA (voltage controlled amplifier, or its digital incarnation, DCA) also provides level control, but without summing everything together. This is why VCAs are referred to as Control Groups by at least one major console manufacturer. They’re just controlling the signal levels, not summing them or routing them or anything else (Figure 1). 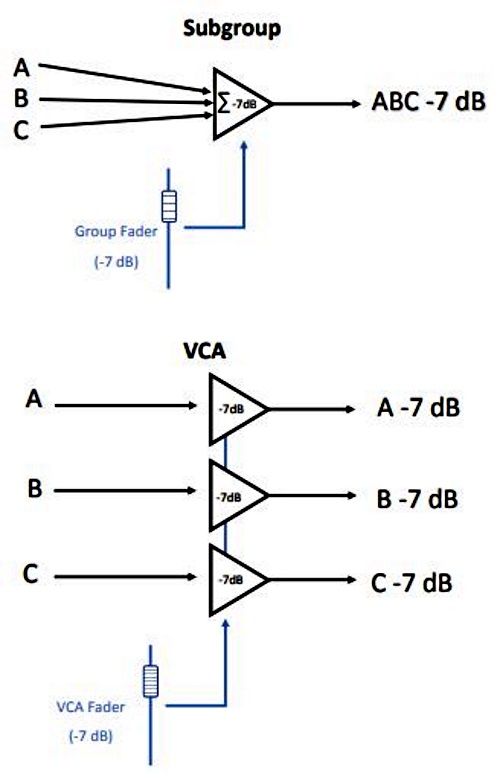 If we’re looking to control the overall level of a group of inputs but preserve their balance, both subgroups and VCAs can get the job done. For instance, when we have a really good drum mix dialed in but the whole kit needs to come down in the mix. Rather than try to pull down each fader while keeping the balance, we can assign the drum channels to either a subgroup or VCA to pull back the drum levels as a whole.

The difference between VCAs and subgroups becomes important when we have individual channels routed to different destinations.

Here’s a practical example: a theatrical production incorporating both flown and deck-stacked loudspeakers.

Let’s say we’re dealing with two styles of ambient microphones: hanging and PZM (pressure zone mics). To increase gain before feedback, we want to keep the floor mics out of the deck PA and keep the hanging mics out of the flown PA.

Now let’s say we want all the ambient mics to be controlled by a single fader. If we used a subgroup for this, all the signals would be summed together, and we’d lose the ability to route the different mics to different places. On the other hand, by assigning those channels to a VCA, we can control all the levels without messing with the routing.

Audio educator and writer Vince Lepore has an excellent analogy to teach about VCAs that he has graciously allowed me to share here: using a VCA is like using a remote to adjust the volume of your TV. The audio doesn’t go through the remote; the remote just tells the TV how to adjust the volume.

Once channels are assigned to a VCA, moving the VCA fader has exactly the same effect as moving all the member channel faders by the same dB amount. It’s as if you said, “Hey, console. Move all these channel faders down by 7 dB please.” This is the part that seems to trip people up, but it’s a simple gain offset in dB for all the members. The VCA doesn’t know or care what the individual channel fader positions are.

If we had four channel faders set to 0 dB, +3 dB, -6 dB and -10 dB, and we assigned those channels to a VCA set to -5 dB, the levels would end up as – 5dB, -2 dB, -11 dB, and -15 dB respectively. A VCA fader set to 0 causes no level change for its members. Just as with a subgroup, then, the relative levels of the inputs in relation to each other are unchanged, so the balance of the mix is unchanged.

The other difference to keep in mind is that since a VCA mimics a fader move, post-fader sends from channels will be affected by VCAs, which is not the case for subgroups.

Send your questions to [email protected].

Jonah Altrove is a veteran live audio professional on a constant quest to discover more about the craft. Send him your "Ask Jonah" questions at [email protected]
All Posts
PrevPreviousNew System For High-End Venue In Poland Driven By Powersoft
NextSignal To Noise, Episode 71: The United States Army Band (a.k.a. “Pershing’s Own”)Next
Study Hall Top Stories
Explore All Study Hall