Arena Rock In The Round

The Right Balance
Still standing with both feet firmly grounded in the analog world on this tour, Carolan naturally draws from an eclectic palette of outboard processing.

“A lot of this stuff is, well… it’s just classic,” he says, first noting his Bricasti M7 reverbs, which see use on vocals and toms.

Other recognized gold standards among his collection include a Line 6 Echo Pro delay modeler and Eventide H3000 harmonizer he calls upon for vocal effects, Yamaha SPX2000 added to snare and other percussion elements, and a dbx 120A subharmonic processor that gets sparingly splashed across the toms.

“I have a good palette to draw from,” Carolan continues. “But I like to think I use it tastefully, especially given the added amount of reflections and higher RT times we create playing in the round. Given our 360-degree configuration, the room comes into play a lot more in terms of trying to get even coverage. I’ve had to become very aware of managing the relationship between reflective and direct sound. The way I approach it is to get the system to do the work of balancing things. That way my mix can remain a mix, not a tool to reach sonic engineering goals.”

Part of the approach relies upon d&b audiotechnik’s ArrayProcessing functions, which are found within the ArrayCalc simulation software. Incorporating filter algorithms that calculate and optimize the performance of the d&b line arrays over the entire 360-degree area of coverage, it’s an ace in the hole in terms of achieving tonal balance.

“With ArrayProcessing,” he says, “I gain the peace of mind that the tonal and dynamic content of my mix is really spreading evenly across everyone’s ears. It makes a huge difference in this environment, where direct versus reflective sound is so important. I learned from the engineers at d&b that even the smallest tweaks can have maximum impact.

“Just a single dB often greatly alters whether what you perceive is in your face or heard outside of its spatial context. I can bias this system toward my needs of being linear in terms of power over distance, or linear in the sense of frequency response over distance. I have precise control over the amounts of energy present in the room, at all times and in all places.”

Heard, Not Seen
For his part, monitor engineer Adam Taylor deals with his mixes with an equal eye on every nuance. “Just like out front, being in the round makes my job difficult, as everyone is essentially in front of the PA all of the time,” Taylor points out. “There’s no hiding place ever.” 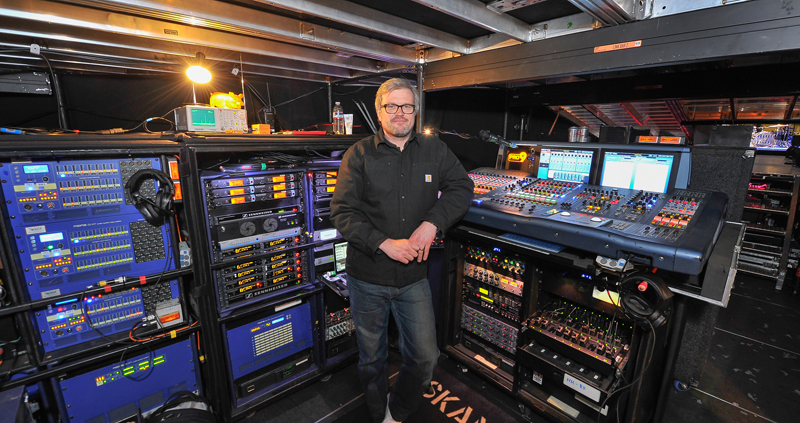 Adam Taylor in his space beneath the stage that accommodates his stage monitor kit.

Just trying to find Taylor at a show is a dilemma in itself. Located not far from Carolan’s house position, he is nonetheless virtually invisible inside his bunker-like environment beneath the hammerhead of one of the thrusts, with little more than a letterbox to peer out of to physically see the stage. He mixes on a Midas PRO9, pushing the board hard with 79 inputs coming from the stage.

Keeping his stage volume down is imperative, so everyone is on wideband Sennheiser 2000 Series in-ear monitoring systems feeding either custom UE 11 buds from Ultimate Ears or generic Westone UM Pro 30s. Other than a lone bass amp, there isn’t a single traditional cabinet onstage, with guitars all using Kemper profiling systems instead.

Beyond the three core members of the band (frontman/multi-instrumentalist Matt Bellamy, bassist/backing vocalist Chris Wolstenholme, and drummer Dominic Howard), keyboardist/utility player Morgan Nicholls is on this tour. For the size and scope of this show, microphone inputs onstage are surprisingly spartan, with wireless Sennheiser transmitters sporting Neumann KMS 105 capsules being the choice for Bellamy and BETA 57A mics from Shure standing in for Wolstenholme’s backing vocals. 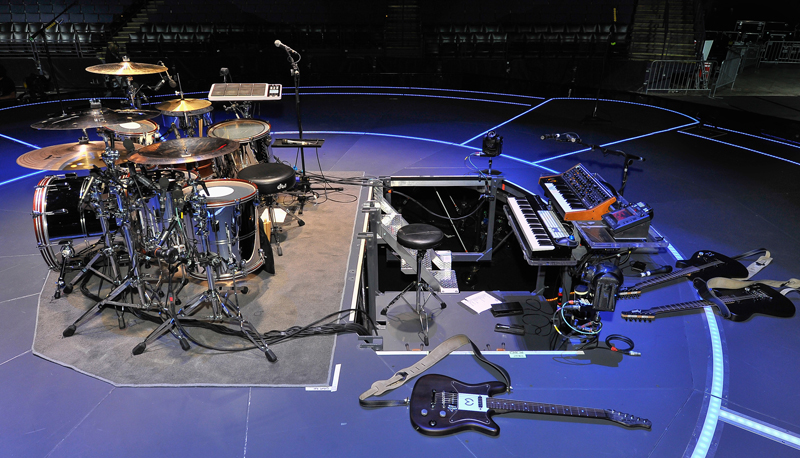 A partial view of the very clean stage.

At drums, a beyerdynamic M88/Shure BETA 91 combination captures kick; there’s also a Shure SM57 on snare top, while hi-hat and ride cymbal get an AKG 451 and the overhead crash cymbals are individually miked with diminutive Neumann KM 184s.

“We’re struggling more than ever with spill,” Taylor notes. “Even though we have this massive stage, the band has actually wound up closer to the drums compared to gigs past, and then of course there’s the matter of playing in the round. All of our mic choices are calculated to help combat these problems while still providing the fidelity and performance the band requires.”

Another perspective of Muse in concert on the current tour.

Making It So
Taylor’s mixes for the band are generally a bit of everything, with prominence given to each individual as needed by that person. While he is keen on the sound of the Midas PRO9 and its onboard dynamic EQ, he still uses some outboard gear to reach his mix goals. To that end a TC2000 and a Yamaha SPX1000 are MIDI-controlled and have a scene per song. With the TC unit managing longer delays and “bits of fancy stuff,” the SPX1000 makes itself heard on snare.

When Taylor calls up his scenes, he has four stereo mixes for each member of the band. From his outputs, signals travel through Aphex Dominator limiters along with a small amount of output EQ from the board for three of the mixes. For Bellamy’s mix, he uses a four-band GML Model 8200 parametric equalizer from George Massenburg Labs. Apart from that, the only other piece of outboard gear within his inventory is a Summit DCL-200 dual-channel tube compressor and limiter. 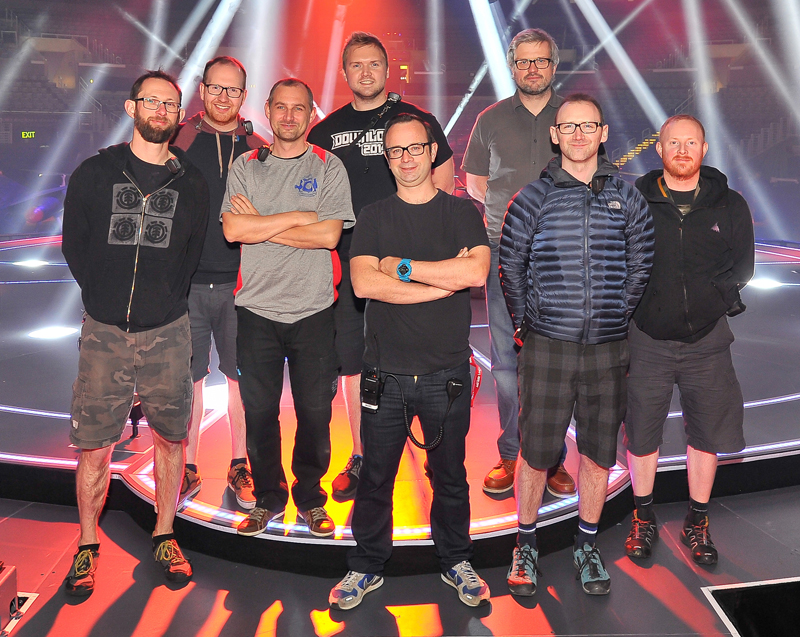 Sonically, the Drones World Tour finds the band and its production in top form and over the top, with an abundance of technology at its disposal that despite its multimedia madness, never descends into gimmickry.

“We’ve succeeded in turning something extremely difficult, expansive, and inert into something that is impressively musical and in motion,” crew chief Tucker says on a closing note. “There’s a mammoth amount of kit at large here, a mammoth amount of tech. To pull this show off every time is a big ask, but I guess we’ve proved it’s possible, wouldn’t you say?”

Gregory A. DeTogne is a writer and editor who has served the pro audio industry for the past 33 years.