Complex Device
For many decades, Hewlett-Packard was the world leader in designing and manufacturing test and measurement instrumentation for audio, vibration, and medical usage. By the way, HP spun-off its test and measurement division to Agilent Technologies in 1999.

In the late 1970s I was lucky (and delighted) to have access to an HP 3580A, a heterodyne signal analyzer, as well as a B&K measurement microphone and precision mic preamp. See Figure 2. In those days, this array of equipment was worth at least $30,000 dollars or more – a lot of money then and now.

The 3580A looks like a portable oscilloscope, but actually is a spectrum analyzer possessing a phenomenal 1 Hz resolution. To put this into perspective, 1 Hz is nearly two orders of magnitude greater than a third-octave RTA.

This complex device provides a swept sine wave as the stimulus signal while internally, a narrow high-Q tracking filter follows the frequency of the swept sine wave as it runs through its sweep. The high-Q tracking filter rejects room reflections and other side-band noise, thereby producing a response curve that closely resembles a near-field measurement.

The 3580A worked beautifully when it was used to precisely flatten an individual loudspeaker or cluster of loudspeakers – but only when used in close range. The 1 Hz resolution allowed, for the first time, a truly accurate view of the response of a loudspeaker design. Unfortunately HP didn’t intend the 3580A to be used for corrective room equalization. At that time, precision room EQ was not yet something that was discussed much. 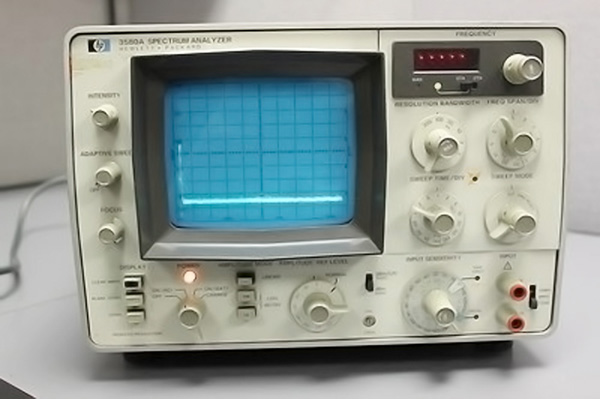 The 3580A could not measure accurately at meaningful distances from the loudspeakers because the tracking filter could not be delayed to “wait” for the sonic energy to arrive at the measurement mic.

The result was a skewed response trace that provided almost nothing of value about the room response in the critical low frequencies. I was taken aback to learn this (having previously only used the 3580A for nearfield loudspeaker development), and was deeply disappointed. But as they say, necessity is the mother of invention.

Precise & Meaningful
After the RTA came the introduction of FFT-based measurement equipment. FFT stands for Fast Fourier Transform and is a mathematical function, not a product name. However, the term has become a moniker that many in our industry associate with modern-day measurement processes.

And well they should, because an FFT will provide a “look” into how sonic energy behaves, in a precise and meaningful manner that would be impossible to obtain using an RTA or a heterodyne analyzer. Arguably, an FFT-based product will eclipse any other form of test and measurement technology available for in-situ acoustic response measurements.