Analog Snake Systems And Their Applications

I once predicted that the analog snake would be gone soon, but something strange happened...the world did not change.

Back in 1996, I predicted that the good old analog snake would be gone, soon to be replaced by digital counterparts. But something strange happened…the world did not change.

As both a manufacturer of snakes and a distributor to the Canadian market, we sell more analog snakes today than ever before. With that in mind, let’s have a look at analog snakes and their application. There are basically two formats: traditional floor boxes or rack-mount snakes.

The floor box is less expensive, generally has fewer features, and is maybe a little less sexy. It’s less expensive to eliminate expensive multi-pin connectors by attaching the cable directly to the snake head. This is usually stored together with cabling in a large case.

Rack-mount snakes are usually split into two, with the head stored in one case and the cable in another.

These are generally outfitted with multi-pin connectors and more “concert specific” options. System techs find the upright positioning of rack-mounted snakes to be easier to use with less spaghetti to sort through in times of need.

Most concert snakes are set up with a 200- to 300-foot (75- to 100-meter) multipair cable (trunk) for front of house and a 50-foot (15-meter) trunk for monitors. These are “Y’d” via simple hardwire or “split ” via isolation transformer. A ground lift switch is usually on the monitor out. 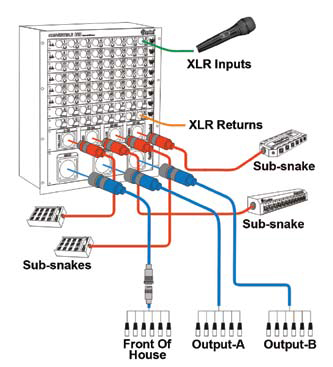 Some trunks have the XLR break-out splay attached, while others employ a multi-pin at the breakout that allows the splay to remain inside the console dog-house. The size and magnitude of the snake can vary immensely depending on the situation, and they can be scaled depending on individual needs.

Types Of Cable
Most snakes employ twisted pair balanced wire, the same type of cable that telephone companies have used for 100 years to transmit phone calls thousands of miles across the continent. Twisted pair is highly immune to electro-magnetic fields and well suited for these relatively short runs.

Trade-offs with cable are size and performance. Back in the early days, folks used to use Mogami – a very flexible recording cable – for concert touring. Their idea was to get lower capacitance cable for maximum high-frequency performance. But this cable corkscrewed in no time because it was too soft.

At the other extreme, we’ve built snakes for use in the arctic (literally). These are quite stiff when warm, but would remain somewhat flexible in sub-zero temperatures, and as you might imagine, this type of cable is very difficult to deploy. A nice balance between ruggedness and flexibility is preferred.

Today, most touring companies opt for 50 or so audio channels with individual PVC jackets that hold the shield in place.

This is extruded “hot” so that it embeds itself into the outer jacket to resist corkscrewing. A cable with a 1-inch (2.5-centimeter) OD (outside dimension) is usually preferred as it is relatively easy to handle while having sufficient channel capacity.