Many professional audio manufacturers are now actively producing their own proprietary network connection and control systems, thus enabling users to create and control products within the audio chain.

While not a particularly new concept (Crown, for example, started the trend in the 1990s with the IQ computer control system for its amplifiers), recent years have seen a plethora of new solutions.

Therefore, to partner this article on interconnection options, here’s a brief overview on the control and distribution solutions currently available.

A-Net
Developed by US manufacturer Aviom, A-Net is effectively a protocol with teeth. Capable of sending high quality 24-bit digital audio over CAT 5 cable, the solution aims to reduce the inherent restrictions of Ethernet line-length and latency. As such, sub-millisecond latencies from analog input to analog output are attained with cable runs up to 500 feet (150-meters).

Best known for its Pro 16 Monitor Mixing System, Aviom has now extended the scope of A-Net with digital snakes and audio networking solutions.

HiQnet
Released n 2005, HiQnet is described by its developer, Harman, as a “communications protocol” or language with which all device-types within the full audio signal path can communicate. Co-developed and shared by engineers from all the brands within the Harman Pro group, HiQnet merges the features from all previous brand-independent communications protocols, such as Crown IQ and BSS SoundWeb.

The solution offers full control and monitoring throughout the audio chain from digital console to loudspeakers and wireless microphones via the proprietary System Architect software.

NetCira
Developed by Japanese manufacturer Fostex, NetCira (Network Commercial, Industrial and Residential Audio) is an audio transport and control over Ethernet solution which uses standard 100BaseTX switching hubs plus CAT 5 or fiber cabling (for longer distance transport) with daisy-chain or star topology. Latency is quoted at 125 microseconds at 48 kHz at a 24-bit rate. Up to 64 channels of digital audio can be distributed to over 63,000 NetCIRA devices on a single network.

Each NetCIRA device has a unique MAC address which identifies itself to system, the NetCIRA system as such “self discovers” new modules added retrospectively to the network. In addition, proprietary and third party partner output cards are available for use with Yamaha consoles and EtherSound networks.

NetMax/IRIS-Net
Since the introduction of the first IRIS (Intelligent Remote Integrated Supervision) software platform for amplifiers in 2002, Electro-Voice has been extending its audio control protocol and hardware. IRIS-Net is a PC-based program that allows the configuring, controlling and monitoring of a complete PA system or installation from one central location.

This has now been extended with the NetMax processors, led by the new NetMax N8000-1500 Digital Matrix Processor, a modular system which incorporates the DSP-2 engine and which when fully loaded provides 1900 MIPS of processing power for up to 32 channels of digital audio, with full integration and CobraNet functionality and a fixed latency of 2.19 ms.

The control surface has also been extended via the FIR-Drive Line Array Controller for line array control within IRIS-Net.

QSC Q-Sys
Q-Sys is a complete integrated system platform that encompasses everything from the audio input to loudspeakers. The primary elements of a Q-Sys system are the Core and I/O Frame.The Core performs all the audio routing and processing and handles all control functions. The Q-Sys Core is available in three sizes, Core 1000, 3000, and 4000, and features a centralized processing architecture.

With a centralized architecture any input can be routed to any output without convoluted signal paths. Although Q-Sys employs a centralized structure, it retains the ability to physically locate the input and output connections near their sources and destinations using I/O Frames.

The system also allows full real-time control of design and operation of a powered loudspeaker system via proprietary software RHAON GUI which includes distribution, and processing functions, plus management control and surveillance.

MediaMatrix
One of the first widely available audio transport and control solutions, Media Matrix was pioneered by Peavey’s Architectural Acoustics team in 1993. Originally conceived as a single product, the Mainframe, MediaMatrix now is effectively a standalone brand within Peavey. Utilizing CobraNet technology, in its simplest form, MediaMatrix exists as a small rack-mountable processor, and in more involved applications, it may serve as a large enterprise system using Ethernet networks for the routing and distribution of audio and communication.

This has now been augmented by NION, the next generation MediaMatrix programmable digital audio processing node, which is supported by proprietary Scalable I/O Architecture and NWare software.

Andy Wood is a contributor to Live Sound International. 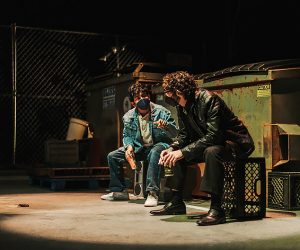 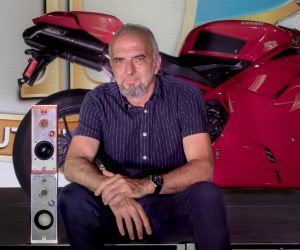