An App For That: Recent Developments In Digital Console Software

It's a genre that's always changing and growing fast

The ability to control functions of a mixing console remotely has been a real boon to live audio system techs and mix engineers. Another benefit is that many of these remotes allow musicians to access their own monitor mix – freeing up our time, letting them tailor as they wish – and without messing anything else up.

Digital consoles can also be easily upgraded with new and/or improved versions of software/firmware. These help foster and enhance iOS device interface and functionality, in addition to expanding the capabilities of the consoles themselves. It’s a genre that’s always changing and growing fast.

Here’s the latest on new app and software development for digital consoles. Note that the majority of the apps can be downloaded at the Apple iTunes store, although some are available from the respective company’s website.

Allen & Heath just released firmware version 1.1 for the GLD digital console, and it supports the new GLD Remote app for iPad or iPad Mini. GLD Remote connects to the GLD-80 mixer on a wireless network and provides access to any of the mixer’s channel faders and mutes, DCA faders and mutes, image controls, aux sends and assignments, as well as channel input and output processing, mic-pre control and full metering. It also supplies control of high-pass filters, gates, parametric and graphic EQ, compressors and input/output delays.

System setup capabilities include a real-time analyzer (RTA) to ring out monitors and EQ the PA, the facility to name and color channel strips, custom layers with drag ‘n’ drop strip setup to suit any application, and a mix view where monitor engineers can keep both master levels and contributions under control in a single screen. Additionally, GLD Remote provides channel PFL control to enable the engineer to remotely listen to feeds using a wireless monitor system. 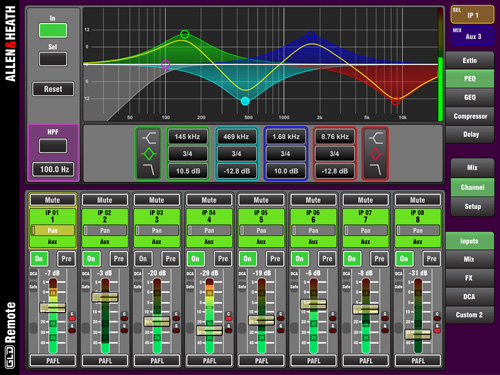 For the iLive Series of digital consoles, A&H offers iLive Editor for PC or Mac fosters configuring the system and editing show files offline, as well as offering complete wired or wireless control using standard TCP/IP Ethernet with one or more computers. In addition, the iLive MixPad App for iPad gives access to most of the console functions allowing an engineer to mix the show wirelessly. And, the iLive OneMix app for iPad locks control to a single aux mix, allowing a performer to mix themselves. Multiple iPads can be used.

Multiple iPads can be used on a single console simultaneously, and the user has the option to lock each iPad so that it can only access one mix. Mixtender also provides wireless remote control of all fader levels, including input faders, all bus contributions and masters, VCA, and uniquely, MCA fader levels. Remote control of the onboard Klark Teknik DN370 graphic EQs found on all PRO Series consoles, as well as input and output channel mutes, can also be quickly accessed using the iPad’s multi-touch interface. 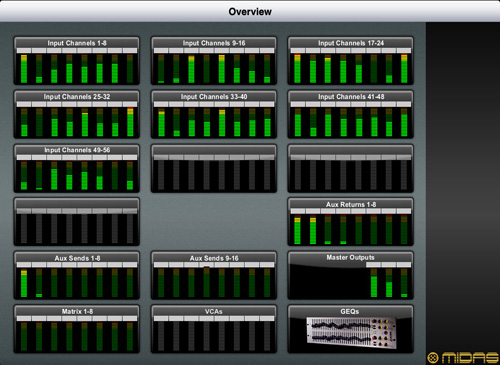 Last year, Midas introduced Generation-ll software for all of its digital consoles that includes numerous high-resolution FX plug-ins, designed not only to exceed the performance of third-party algorithms and hardware devices, but also to operate within the company’s automatic latency management technology for a phase-coherent mix.

Read More
In The Studio: Guerilla Recording Is As Simple As One, Two… Eight?

It also includes advanced navigation modes, a multi-tabbed preferences screen with new user options means so that consoles can be “customized” to the operator’s personal predilections. Other new G-ll features include aux pan linking, global pre/post selection and per-channel viewing of VCA and POP group membership, with an onboard DHCP server, permitting remote control of any console wirelessly.

For the recently introduced CL Series of consoles, Yamaha offers the CL StageMix iPad app. Note that CL StageMix does not provide remote control of all CL console parameters, rather, it is more focused on the requirements of adjusting monitor mixes on stage. That said, there’s control of almost 20 important functions. In addition, a built-in iPad stay on the CL5 and CL3 provides a convenient mount for an iPad to be used for additional control functionality. 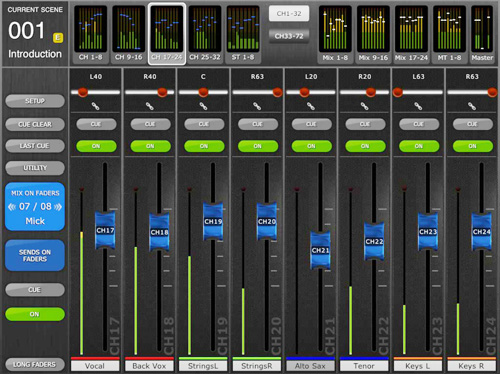 And, Yamaha offers Console File Converter, an app that allows data to be shared between a number of Yamaha digital mixing consoles, including the CL Series, PM5D, M7CL, and LS9. As a result, data from one show doesn’t have to be completely reprogrammed from scratch for the next, even if different consoles are used.

Craig has worked in a wide range of roles in professional audio for more than 30 years in a dynamic career that encompasses touring, theater, live televised broadcast events and even concerts at the White House. Currently he owns and operates Tech Works, a regional production company that focuses on corporate events based in Reno.
All Posts
PrevPreviousIn Profile: Tony Award-Winning Theatrical Sound Designer Christopher Shutt
NextSlick & Seamless: Developing A Live Digital Recording SystemNext
Top Stories
Explore All Study Hall