Amplifier Power Class: Not All Ratings Are Similar

How loudspeaker loads affect amplifier power output; how to compare power ratings of two different amp models; why to avoid 2-ohm operation; using bridge-mono operation to get more power; and the advantages of bi-amping

To answer these and other questions, we need to explore the finer points of amplifier power ratings and loudspeaker loads.

How Loads Affect Power Output
As amplifier data sheets show, an amp’s power output tends to increase as the load impedance in ohms decreases. You might see a spec of 400 watts into 8 ohms, 600 watts into 4 ohms, and 800 watts into 2 ohms. Why does that happen?

To explain, let’s start with the basics. As Ohm’s Law states, Current = Voltage divided by Resistance. The smaller the resistance, the higher the current. So low-impedance loads draw more current than high-impedance loads.

Here’s an example. When you play a 1 kHz tone through a power amp at a low level, it puts out a constant voltage, say, 20 volts. What is the current drawn by an 8-ohm, 4-ohm, or 2-ohm loudspeaker?

As you can see, the amplifier power doubles every time the load impedance is halved. That’s at low levels, where the power supply is not forced to produce much current.

What happens when you add more loudspeakers in parallel to a single amplifier channel?

See Figure 1. If you connect one 8-ohm loudspeaker to a power amp output, the load impedance is 8 ohms. In the example above, that loudspeaker receives 50 watts.

Now suppose you connect two 8-ohm loudspeakers in parallel to the same power amp. The total impedance seen by the amp is 4 ohms, so the amp puts out 100 watts, and each loudspeaker receives half that power, or 50 watts. 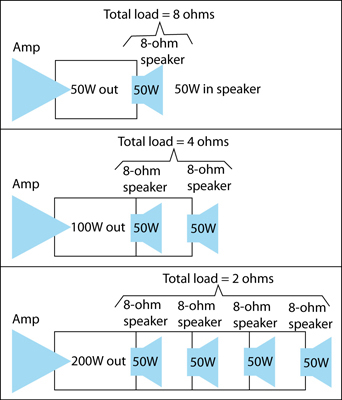 Figure 1. How adding loudspeakers affects amplifier power and the power applied to each loudspeaker. (click to enlarge)

Now wire four 8-ohm loudspeakers in parallel and connect them to the same amp. The total impedance is 2 ohms, so the amp puts out 200 watts, and each loudspeaker receives 50 watts.

So each loudspeaker gets 50 watts no matter how many loudspeakers you add in parallel. That means the SPL goes up as you add more loudspeakers to one power amp. Again, we’re talking about low levels where the amplifier doesn’t have to produce much current.

Read More
2019 Top 20 | #15: By Ear & By Analyzer: Examining The Roles Of Instinct & Objectivity In System Optimization

Imagine an ideal amplifier connected to an AC mains supply with unlimited current. This amp’s power rating doubles whenever the load impedance is halved. If an amp produces 400 watts at 8 ohms, it could do 800 watts at 4 ohms and 1,600 watts at 2 ohms.

In this ideal amplifier, the power supply’s DC voltage is constant no matter how much current is drawn from it. The supply could drive hundreds of loudspeakers in parallel with a total impedance near zero ohms. But real-word supplies can’t deliver infinite current. Nor can the AC mains or the output transistors – they would melt.